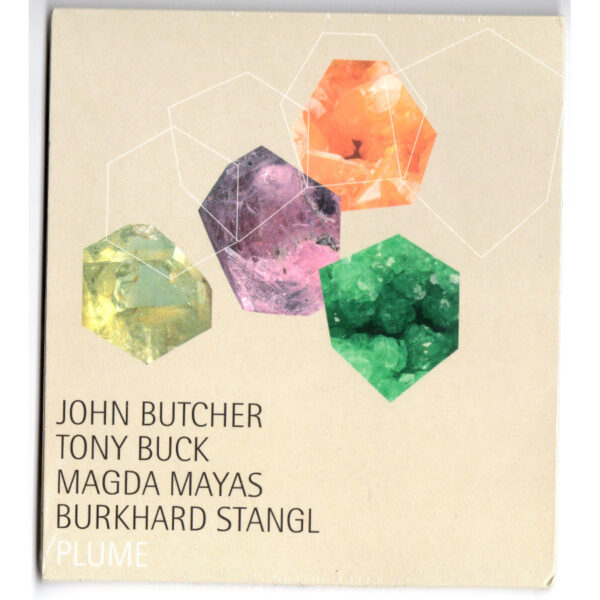 Four high-profile improvisers capitalise on their connected histories, which found them webbed-in to one another via a confoundingly complex array of formations large and small; and stepping into the present arrangements via – one assumes – a mutual and long-term esteem and/or chemistry. From the start, the sense of atmospheric cohesion is as sincere as the signature sounds of the participants: Tony Buck’s unmistakeable cymbolic shimmering as adhesive as sea foam; Butcher’s full sonic scrapbook given voice and breathing space: every tongue-twitching trill and sharpened honk served with nonchalant mastery; Burkhard Stangl’s guitar is rubbed down to raw, regular plinks, like a skeletal bridge that precariously spans a yawning chasm. From Magda Mayas’ fists erupt dense, resonant note clusters, as though Cecil Taylor’s hands were ripped into a black hole, feather-punching through the innards of her chosen instrument like a gory Manga murder. One and all: abiding ever in awareness, issuing forth a supernatural gestalt of their collective potential.

These two performances were recorded in London venues four years apart (2007 and 2011), thirty and forty minutes respectively, Buck and Butcher comprising the core; the three-human headcount providing a further element of consistency; the other being the lustrous sound summoned up on both occasions: one that blends visceral gestures with a perpetually softening ambience. It must have been warm in those venues – by the end at least. The aforesaid signatures socialise succinctly across a spectrum of collective possibility; the music traverses gaping gulfs of narrative space, foregrounding not a single ego, but responding intuitively to evolutionary permutations introduced at regular, if imperceptible junctions. Sound quality is first-rate, too. The minutes fly by.

It’s a sobering consideration that modern consumer listening dictates that recordings such as this – which would still be blowing minds today if recorded half a century ago – now likely constitute but a financial afterthought at a nice show at the Barbican. Still, it sounds so good you might feel you were there. 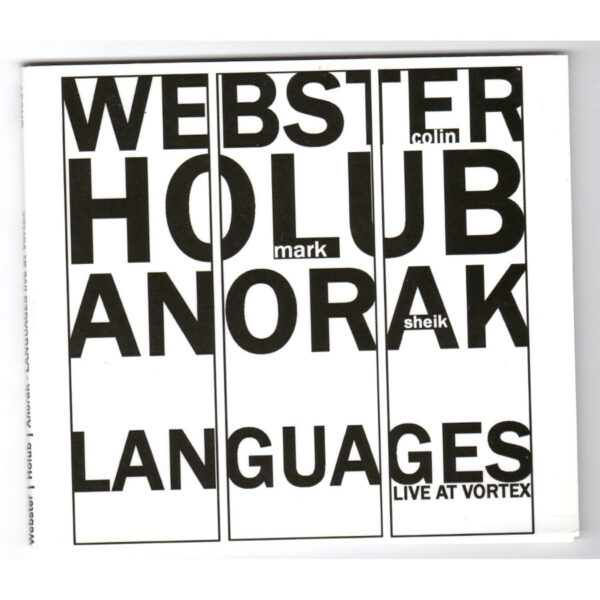 Also of the ‘wish I’d been there but this will do’ species (though a markedly different specimen), is this compact live set from a trio of Colin Webster (sax), Mark Holub (drums), and Sheik Anorak (guitar), captured midway through a 3-date tour of southern England. It immortalises their incendiary antics in four sections, presenting a performance that pits the three in Houdini-mode, prying themselves apart while a universal magnet has them tied in knots.

The first leg witnesses Webster barking gutturally and pulling ugly faces in playful riposte to Sheik’s primitivist six-string lunges. Holub holds back somewhat, perhaps sensing rhythmic sufficiency in the guitar work. Mysteriously, the exchange halts six minutes in and resumes as a fluttering twitter-fest, one newly liberal in the application of cymbals albeit. Such cutaways wouldn’t happen if this were not a ‘document’ perhaps (nor would the lengthy between-track banter!). Still, the reptilian monstroid matures, becomes sandpaper-skinned, horned and mobile in next-to-no time and resumes its rampage – the three elements increasingly charged and stunningly synchronised. It would have been quite a treat to be one of the two hands present to applaud this fiery spectacle.

From then on the sound simmers slowly from languid beginnings into tectonic trembling – exhibiting an impressive mastery of a palpable tension, suggesting a familiarity between musicians that does not impede a joyful pursuit of new discoveries. Bass in absentia, Sheik’s crunchy, centipede guitar compensates by providing structure for flaming acrobatics of his playmates. Wisely though, the trio skirts the temptation to simply explode into a chaotic free-for-all, and in doing so distinguishes themselves as a controlled but compelling unit. By the final piece, they have spent their voluble energy and operate on a more sparing and astringent manner: the space between them (and their notes) seemingly greater; they make their main mission before packing up to deconstruct the detailed music they’ve so assiduously assembled. But not without a final roar of blistering bravado. “Up to standard” as an old friend of mine would have said.