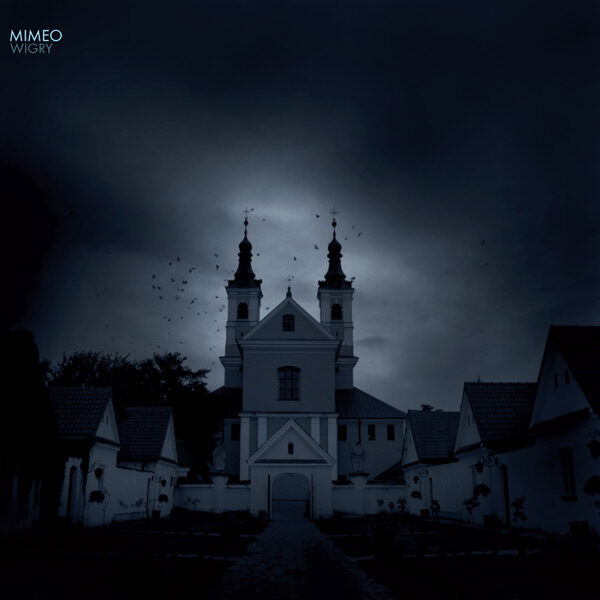 Avant garde soundworkers such as K11/Pietro Riparbelli, Sudden Infant’s Joke Lanz and those involved in Touch Records’ Spire LPs have all “fairly” recently been found recording their wares using the near-perfect acoustics found in various places of worship. As the prime directive of church/cathedral design was to create structures that were sympathetic for the awe-invoking projection of an early take on surroundsound, I’m surprised that this concept hasn’t been a more commonplace one.

Another entry within this select few is the Wigry double LP by M.I.M.E.O., an acronym for Music In Movement Electronic Orchestra, who’ve chosen to exploit the peaceful confines of a church in Wigry, Northern Poland (hence the album’s title). Now well into their second decade with previous communiques on Grob, Erstwhile, Serpentine Gallery and Cathanor, this improv ten-piece supercollective (“Tencipede?”) has a modus operandi which sees that each instrumental voice is routed through a separate speaker. But…aside from the signature prepped guitar of Keith Rowe and the suspenseful pianistics of Cor Fuhler, the four untitled tracks present a pretty challenging task in determining just exactly whose fingers are manipulating what in this lush expanse of sonar blips, static crackle and black velvet drones. Be it Phil Durrant, Thomas Lehn, Gert-Jan Prins or Rafael Toral (electronics) or be it computerists Christian Fennesz, Kaffe Matthews, Peter Rehberg or Marcus Schmickler, it’s a matter of some head-scratching from yours truly. But whichever way you cut it, all constituent parts compliment and merge together perfectly, much in the manner of slowly colliding blobs of lava lamp juice. In fact, these pieces suggest that the unit was already in the process of instant composition way before the starting pistol was fired. An example of group empathy this finely tuned (think M.E.V., AMM (of course!!) and Rune Grammofon’s Circulasione Total Orchestra) is certainly worth grabbing with both hands. And quick, it feels limited.

A joint effort from Monotype Records and Bolt Records who are to be heartily congratulated for the mysterious and evocative sleeve photography.