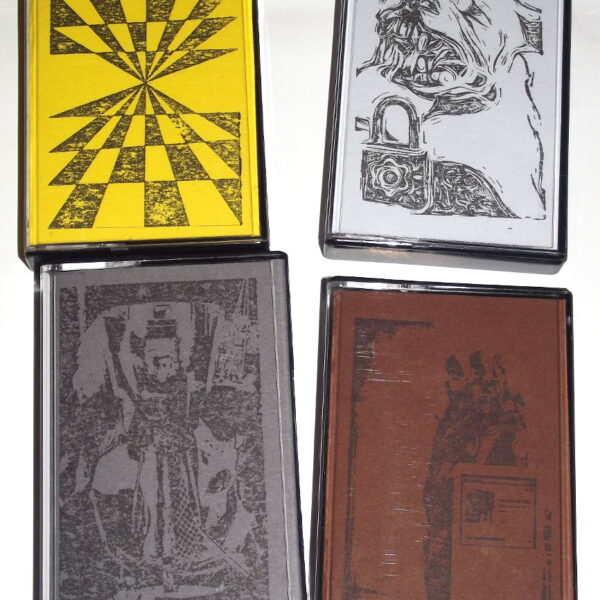 We were sent a box of cassettes from the UK micro-label Mantile Records in January 2013, probably on the strength of their Kayaka release or rather reissue of a CDR called Operation Deep Freeze (see here for review). All of these were released in 2012 and are available in digital form if you don’t like cassettes. The item by Burd called Wild Saloone (MANTILE #019) comprises two long instrumentals, very melodic in nature but not much more than rather tame techno enhanced with some hesitant keyboard playing. The serious lack of “groove” here starts to get a bit wearing for me, although fans of Emeralds may want to investigate. Brood Ma‘s Fission (MANTILE #022) is more interesting, with a slightly darker tone to its electronic jacket and tie. It has a number of shorter tracks, some of them decked out with very surreal titles, and musically it shows that the creator has a range of effects he can wring from his sequencers and beat-boxes, attempting to engage us in many moods – from the upbeat and jolly to the sullen and grim. Like Burd, Brood Ma suffers from a lack of conviction in the playing, even when some of the actual sounds he makes have potential. Probably not quite as grotesque as the cover art would like you to believe. Spoils & Relics have their Stammer Challis (MANTILE #023), which is quite chaotic – lots of creaky and cranky home-made equipment, wobbly tapes and ugly electronic burbles, everything chopped to pieces and served up in an ill-formed and half-baked mess which is barely digestible. A very disjunctive approach to form would seem to characterise the music of this bedroom experimenter. I see there are some other releases which may appeal, on Chocolate Monk and Harbinger. They are (I can’t help thinking of them as a duo, for some reason) comparative veterans compared to Burd and Brood Ma, and have been concocting this kind of broken noise since 2009. Not too bad actually; if you can withstand the utter absurdity of it, this tape can be quite entertaining, in a nauseating sort of way. Lastly we have Fossils with What A Drag (MANTILE #020). At first spin, this derelict oddity may appear to be emerging from the same sort of broken noise outpost as Spoils & Relics, and it exhibits the same attachment to lo-fi recording methods and the production of inchoate, lumpy sounds that are very hard to swallow. Fossils are quite a well-respected improvising / free noise “collective” from Ontario who have been doing it since 2004 and the two key members, David Payne and Daniel Farr (who may or may not be represented on this tape), have been known to pass their tapes over to Graham Lambkin for additional treatment. The Lambkin connection earns them endorsement points from this quarter, and I may even be prepared to validate their parking some day. The tape is still a tough row to hoe for your ploughing ears, however. It’s not a question of harsh, blasting noise, but its determination to remain klonky and non-musical at all costs, as if sawing apart pieces of junk and reassembling them in a degenerate workshop of the mind. If Burd belongs on Spectrum Spools, then this release should also find a home on Public Eyesore.

A couple more items from Nick Hoffman and his Pilgrim Talk label, these from 9th November 2012. Back Magic is his “garage rock” combo in which he performs (I assume) as Hair Exp, the guitarist and singer, with just a drummer named Terror Trans to back him up. Blood Plaza (PT23) is a small lathe-cut three track which barely plays at 45 RPM. If it’s lo-fi you’re after, this particular wan item turns that aesthetic into a new form of trans-dimensional travel – you never heard such a pale and sickly sound, drums changed into soggy cardboard packets and the guitar screeching like a stillborn weasel. True connoisseurs of lame 1960s garage punk (as collected on Pebbles, Nuggets, etc.) tend to cherish the real bottom of the barrel stuff, Midwest bands who couldn’t afford proper recording facilities and yet still somehow got a record made on the cheap, most likely by piling into a phonebooth and using the receiver as an amplifier. Freak-beat lovers who dig that stuff should get their collecting fangs deep into this slice of anaemic coffin-fodder, while there’s still a pulse. The other CDR, Jonestown Death Tape (PT24), seems to be another release for the infamous Jim Jones tape recording, which has been issued in various forms by assorted sickos; at least three other versions can be accounted for since Genesis P. Orridge did it on Temple Records in 1984. While I’m personally slow to see the appeal of this “icon” of death culture, there’s no denying it’s a classic of nihilism and despair, and as such it fits into the Pilgrim Talk aesthetic perfectly.

The LP by Egg, Eggs is called The Cleansing Power Of Fruit (FEEDING TUBE RECORDS FTR073). The secret weapon of this zanoid American combo is the vocals and performing skills of David Russell, a charismatic fellow who is much more than just the singer in a band – just check out any of the numerous Egg, Eggs videos on YouTube to get some idea of the eccentricity and physicality of what transpires when a microphone is slipped into his paw. He looks like he just stepped out of a 1950s Bleecker Street café – he projects this formidable image of a burly jazz-loving beatnik with his wild hair and fearsome hornrims, and even so none of this prepares you for the sheer untrammelled craziness of his vocalese. You might expect free-form poetry of some kind, but what Russell offers us is mostly unintelligible – high-pitched whining, squeaking, barking and wailing, occasionally given added weight by nursery-rhyme styled chanting of nonsensical phrases. The main appeal is just the sound he makes with his voice – the twists and turns of his accent and phrasing, akin to which very little else sounds. Except David Thomas, of course. The press notes here do note the resemblance to Crocus Behemoth, and there’s even a physical likeness to some degree. Russell’s degree in far-out-ology should not distract us from the music on the LP – the collective efforts of Sheldon, Crespo, Robinson, Lee, Brewster, Callahan and St. George are all here, along with the drummer John Moloney (from Sunburned, and recent drummer for Thurston) and special guests including Matt Valentine. Together, these crazed North-Easterners blast out unhinged free rock sludge using guitars, basses, electronics, and lots of drums, also adding their vocal efforts to the general hullabaloo. It’s overblown, over-worked, and exhausting to listen to. This particular LP has been edited together from numerous live performances recorded in a three-year period (2009-2011), and this does add extra fire to the material; the editing knife always kicks in precisely at that moment when David Russell’s performance is at its most manic and emotionally heightened. This strategy is guaranteed to give the listener a high ratio of jolts and shocks per square inch of vinyl. For that reason, it’s a bit more rewarding than sitting through some of the longer YouTube episodes, which don’t seem to vary much over 20-40 minutes. Egg, Eggs is clearly a “live band” experience and I expect you really had to be there in Massachusetts to receive the full charge of 115 volts to your rocking bones, but if you want to collect more physical emanations from their odysseys, there are at least two dozen (very limited) cassettes of their work available from this label.