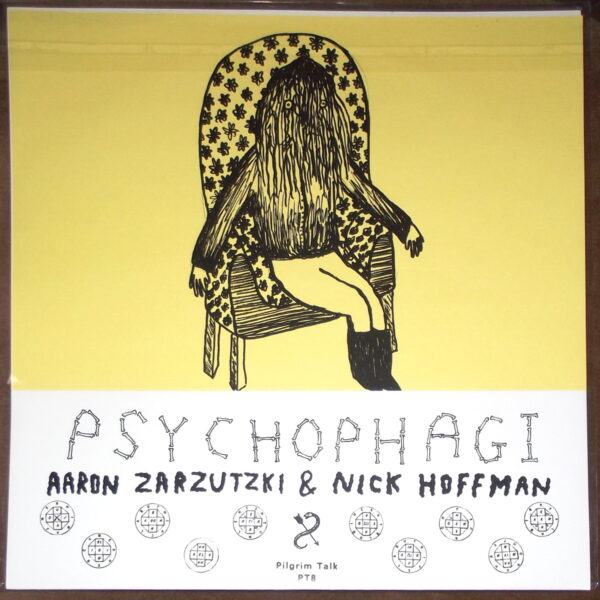 Twitch Of The Death Nerve

Stefan Jaworzyn has been a thorn in the side of many, be it listeners, fellow musicians, readers of his Shock Express magazine, or even customers who buy rare records from his “Scum List” who, while they receive a good service, are affronted by his outspoken and embittered descriptions of the music. Even his guitar work has sometimes been an audible “screw you” to the audience, whether as a founder member of Skullflower or as part of the intense guitar-drum duo Ascension. But it’s all because of his extremely high standards and principles, on which he has never compromised one iota, often at great personal cost to himself. I was surprised as anyone when in mid-2013 he recently decided to turn his hand to electronic music, and what’s more he relaunched his dormant record label Shock Records to release the results. EP1 (SX035) is two sides of this new strain of noise, two sides of brutal analogue filth titled simply ‘The Fucker’ and ‘Dr Smegmatic’. Right away the titles clue us in that the creator’s personal bile levels are still bubbling away at an all-time high. The music is similarly repulsive and is guaranteed to appeal to absolutely no-one; conventional fans of “experimental” music will be appalled. But what’s also striking is how original it is; not only is the sound (thick, clotted, wiry) completely unlike anything released in the so-called “electronica” genres, but the approach to the music’s production is characterised by a hard-headed determination to push an idea to the very limits of its endurance. And ours, I might add. ‘The Fucker’ side has a drum machine battering everything in sight like a robotic house-demolishing machine which has just wrecked your kitchen and is thinking about starting on you next. On top of its demented rhythm are piled squiggles, squeals and bleeps from grotesque synthesizers permanently tuned to the “ugly” setting.

Airless and suffocating as this is, it’s also strangely exhilarating, like a bracing blast of frosty weather in the face. The ‘Dr Smegmatic’ side is somehow even more diabolical. It’s like the very sound of repression, redolent of ideas being throttled in the brain before they can even reach a form of expression; nasty, niggardly synth phrases are squeezed through filters and repeated ad nauseam. This miserly outpouring is a cruel and sadistic satire of dance music, filtered backwards through industral-ish sensibilities, becoming an absurd parody of all genres associated with “beats”. One can envisage the cruel “Dr Smegmatic” as a scientist torturing small laboratory animals, and this record is the sound of their writhing agony. Locked in neutral (as is the other side), this ghastly music proceeds remorselessly for an entire side of vinyl at 33 rpm, creating impossible rhythms which even Brion Gysin couldn’t stomach. Faced with this perverse record, Savage Pencil has declared “You could dance to it!”, but I imagine if you tried playing this record on a dancefloor, a lynch mob would assemble in seconds, and you’d find yourself hanging upside down from a lamp post in short order. Others may boast about their “uncompromising” music, but even the most hard-core avantsters are fundamentally softies, and still want their audience to love them. Stefan apparently couldn’t care a whit, and he knocks all that bravado into a cocked hat. He’s since released EP2 in this series, also a limited 12-incher. Prepare to have your entire hide spread thickly with caustic gobs of toxic waste as you endure these electronic monsters!

Here’s good old Nick Hoffman again, this time teaming up with Aaron Zarzutzki on a live performance recorded in 2009 in Chicago. Psychophagi (PILGRIM TALK PT8) is another one of Hoffman’s “what’s going on” records, where the mysterious sounds remain unidentifiable, and even the mode of performance itself sometimes makes you wonder “have they even started yet?” I am gradually coming to terms with Hoffman’s ultra-radical approach in the performance arena, which defies almost all known conventions of improvisation, in favour of keeping an extremely low profile which allows him and his collaborators to pursue something so fleeting and invisible that the process almost seems absurd – futile, even. For the sake of structure, the work has been divided – most likely after the fact – into three parts, hence the “Three Grotesques”. As we contemplate the imaginary faces of these uglified demons, we can also ponder on the meaning of the “Anti-metaphysical propaganda of graveyards”, another conundrum which has been inserted in the title. Death and disaster (and the occult) are rarely far away when Hoffman picks up the performance gauntlet and activates his recording mics.

If you can find your way past any of these obstacles, it is well worth your time girding your loins and going five rounds with this intensely difficult sound art; it may be appear to be embracing all that is cold and macabre, but I suspect the artists are actually doing their best to wrestle with the forces of the night, to hammer the Devil back into his cage, and to beat the Grim Reaper six ways from Sunday with his own scythe. Perhaps the best way they can do this is by recognising the limitations of much so-called “free music”, and forcing themselves to be as quiet and meaningless as possible. Aye, it’s a living personification of T.S. Eliot’s ‘The Hollow Men’. Bear all this in mind, and the ghastly non-musical sounds on this record (vague squeals, clatter, groans and rustling all rendered in quiet and unobtrusive fashion) will eventually cease to seem so absurd, and become almost beautiful and liberating in some way. If life is a game of cards with Satan (or a game of chess with Death), then Psychophagi proves the best way to win is to invent your own peculiar game, bound by its own mysterious rules – but don’t tell anyone what you’re doing.