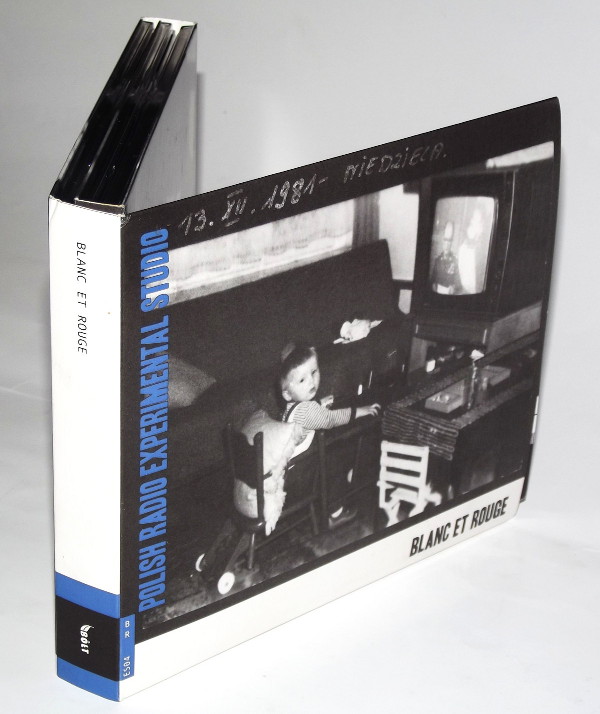 Martial law was declared in Poland in December 1981 – an act that led to the ruthless suppression of political groups, journalists, teachers and anyone who could voice their opposition. While it was officially lifted in July 1983, legislative changes undertaken during that period ensured its effective endurance until the fall of Communism in 1989. That historical nucleus has left a gaping hole in the continuity established by the fourteen extended compositions that comprise this collection, when artistic expression in Poland was stifled. On either side though, it flourished in the Experimental Studio of Polish Radio, the activities of which (between 1962 and 1989) are presented herein. The significance of this dark period is anything but understated in the lengthy essay that accompanies this collection, to the point of tacitly characterising Polish creativity as a political protest. The French title reminds us that the Polish flag shares two of France’s national colours, while suggesting a common revolutionary impulse, and establishing a valourising note that is emphatically sustained throughout the same essay.

Even in peace time – it is related – compositions abounded in Warsaw that ‘alluded to the current events but also pointed to the broader historical and humanistic context’ all of which were made possible under the aegis of the Warsaw Polish Radio Experimental Studio; a facility, we are informed, established by Radio Committee president Wlodzimierz Sokorski to assuage his ‘undeniable guilt’, having served as Minister of Culture and Art during Poland’s stint with Stalinism. A simultaneous striving for cultural, political and even spiritual renewal informs this work, often to the extent of historical disconnection; engendered on one hand by repeated political ‘decapitation’ (witnessed as recently as 2010, when an air force plane carrying Poland’s political elite crashed in Russia) and by an apparent desire to utilise new technology to stay one step ahead of the watchful eye of authority. In many instances the music serves as a satirical protest against political groups also pursuing renewal (indeed, the same political bodies that stumped up the cash to facilitate musical such experimentation).

The resulting relationship between opposing tendencies is a subject explored most explicitly in the work of Krzystof Knittel, who likened art to ‘litmus paper rather than a propaganda brochure’. However, one revealing test of the music’s present-day political potency resides in its apparent status as a cultural artifact, and possibly even propaganda: the collection has the full support of the Polish Ministry of Culture and the Warsaw Municipal Office. I wonder then, whether this newly unveiled work – a sincere attempt to establish a historical and cohesive (if overly selective) set of names and works likely unknown to many – will have the historical appeal or impact of its Western European analogues.

Unacquainted as I am with the majority of those featured, my first port of call is Krzystof Penderecki’s ‘Death Brigade’, which offers at least a vague reminder of his well-known work, Threnody for the Victims of Hiroshima, with swells of screeching strings that occasionally pierce the brick-thick sub-bass rumble; while snatches of biblical text offer fleeting redemption against a flat but brisk monologue that commands an air of wartime paranoia. As it happens, the narrator reads entries from the diary of Leon Weliczker, a member of the Sonderkommando 1005: a concentration camp contingent of mostly Jewish prisoners, charged with the abetting and subsequent concealment of Nazi war crimes. The moral ambiguity of the material led to Penderecki’s wide condemnation. However, while the mood is convincing enough, much of the piece’s 31 minutes are given over to the voice, where excerpt format might instead have sufficed. It is a trend that is maintained far too liberally over the first and third discs, and constitutes the major shortcoming with this collection.

To my ears anyway, Polish lacks even the linguistic footholds an English speaker might find in tongues such as French or German, and while sleeve note synopsis (for all works) is provided, it scarcely compensates for the experience of having to endure so gruelling a listening experience (and I don’t wimp-out easily). This points to an artistic own-goal: if the collection’s raison d’etre is to raise the international profile of a putatively subversive music, then greater selectivity would have paid off in speaking/sound ratio terms, for the audience’s sake. Granted, humanistic sentiments can be gleaned from titles such as ‘Elegy for the Victims of War’ and ‘Guillotine DG’, but as an Anglophone (and not an entirely monoglot one) I find myself excluded by all this chit-chat; a sense compounded by the conspiratorial tone adopted to relate the ‘concealed in plain view’ modus operandi of the composers invisibly biting the hands that fed. To my mind it casts the unwitting listener in the same, ridiculed role of the government, while revalidating the sense of political victimisation that once provided conditions for the music’s genesis.

Mercifully, speech is subdued in the second disc, and sound-wise, compositions tend towards the stark and the sparse: dark, foggy horizons peppered with theatrical suggestions of manual labour, vernacular folk forms, and – perhaps more potently – actual recordings of bombs, fights and gunfire; sprinkled and splurged with tinkling tape-edit sounds and all manner of electronic processing. The atmospheric density scarcely surprises when the collection frequently nominates (or alludes to) ‘death’, in a commemorative manner albeit. Spearheading this approach is composer Eugeniusz Rudnik – a veteran sound engineer of Polish Radio (having enlisted in 1955) – whose own work takes up a third of the total running time, and whose career cross-section illustrates a subtle yet diverse development of style, from (seemingly) narcotic radio drama (‘Lesson II’) to something uncannily approximating the minimal techno pioneered by Basic Channel (‘Guillotine DG’ (1989)), just a few years later, in one of the set’s few demonstrations of musical prescience. However, what it may be said to lack in surprise, it at least compensates for in durability.

Whereas Elzbieta Sikora’s ‘Rhapsody For The Death Of The Republic’ (1979) exhibits a more exciting mastery of Rudnik’s dynamic extremes with its juxtaposition of wartime whistling and zoetropic flicker upon a murky background. It is one of the collection’s highlights. However, while working on a commission of the Groupe de Recherches Musicales, entitled ‘The Head of Orpheus II’, news of the imposition of martial law reached Sikora and the piece was conceptually decapitated. Retitled ‘Janek Wisniewski-December-Poland’ (1982-83), it builds on and offers an even more kinetic approach to ‘classic’ electro-acoustic sounds than ‘Rhapsody’: stereo-panning, electronic flourishes and ascending/descending tones, such as can be readily found in the contemporary works of composer (and Rudnik collaborator) Andrzej Dobrowolski; one who has been mysteriously omitted from this collection. And while I‘m on the topic of unfortunate omissions, I for one would have appreciated hearing Rudnik’s 1971 composition, ‘Divertimento’ (1971): apparently a Schimpfluch-esque compilation of burps, coughs and other sounds edited from official party speeches.

At times the music requires a more nostalgic ear; one comfortable with the impressive output of the Creel Pone label, perhaps. Given the now-historical provenance of this music, some sounds a little dated to my ears: harking back to a time when a composition’s interest resided more in the novelty value of its contents than on its overall structure. At times, there’s a disappointing paucity of dynamic transitions between events musical and vocal on display, which might have ameliorated the perpetual gloom. And in spite of some surrealistic happenings, later entries differ too little from those preceding: the seven parts of Krzystof Knittel’s ‘Dorikos’, for example. A suite for string quartet, tape and voice samples; in sum, the piece returns us to the more lunar environs of the first few tracks, while boasting, at least, vastly superior recording quality, sounding out nicely the acoustic dimensions of the string section’s performance space. The feat is repeated in the 36-minute epic closer, ‘Glückspavillon For Cathy’ (1978), which adds more prominent (i.e. tiresome) speaking sections and electronic sounds, but at the cost of variety. Lacking appropriate visual representation, the listener must be informed that ‘Dorikos’ features recordings of the composer wrestling (with artist Jerzy Kalina) on a piano lid, while commentary issues from a man installed in a loudspeaker. A companion DVD would have helped!

Overall, there’s plenty to be enjoyed here, but digested as a whole, it’s like sitting through a couple of Rainer Fassbinder box sets (I speak from experience): a long struggle with odd moments of engagement, a grim satisfaction upon completion, and an aversion to immediately repeating the experience. My feeling is that compilers would have done a lot better to focus on the kind of electroacoustic composition that would at least have permitted comparison to equivalent work from Western Europe (Poland’s was one of just four such studios in Europe at the time, after all), i.e. more music, less speech. That said, it’s an impressive, if well-meaning introduction to an otherwise overlooked period in recent musical history.