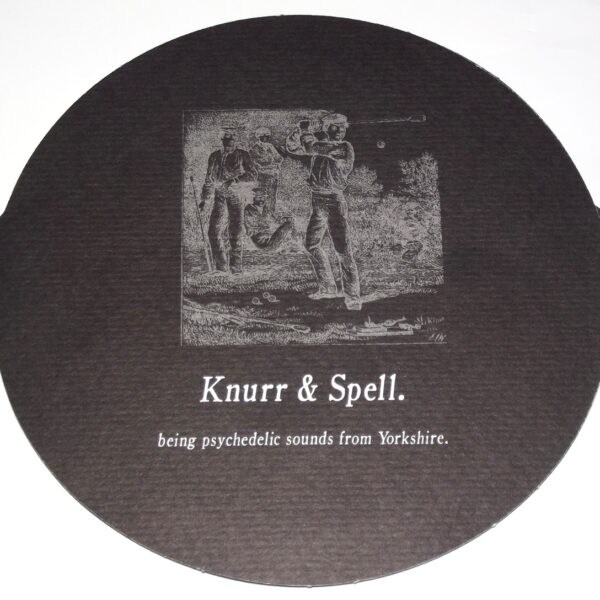 An excellent item is Knurr & Spell: Being Psychedelic Sounds From Yorkshire (SMOKERS GIFTS #14 / MEMOIRS OF AN AESTHETE MOA CD 004). For starters it’s great to hear from Phil Todd after so long, he who bestrode the 1990s UK underground like a colossus with an abundance of releases featuring his own guitar drone band Ashtray Navigations, as well as numerous solo records and collaborative projects. A true connoisseur of noise and drone, Todd is a no-nonsense Northener who saw right through the pose of self-centred drama queen Keiji Haino, and once explained to me in a letter the simple combination of effects pedals that would enable any guitarist to “Do A Keiji”. This release from March 2013 is a four-way split to showcase the “vibrant 21st century West Yorkshire outerground”, in four 20-minute tracks. It seems to me that all four creators are largely about the sound they make; they each have a very distinctive noise, and they spend their 20 minutes exploring it thoroughly, with conviction. Shemboid is the work of painter, collagist and poet Alan Sharples, and his ‘Myths Of The Prehistoric Future’ is a continuous edgy blast of super-abrasive guitar drone mixed with mad sequencer programming. This is real music for fell-walking when facing the hail and rain of a bleak Northern winter, and the very sky itself appears to be filled with skeletons. Sharples’ visual works are likewise psychedelic recastings of that wild landscape that feeds the imagination of any sentient being. On ‘Bontempi Bastet’, the weirded-up voice of Ocelocelot is given full rein; this is Melanie O’Dubhslaine playing with analogue oscillations on the world’s most disaffected piece of equipment. To put it mildly, this metal box of sqwawk and fizz seems to be sinking slowly to the bottom of a very deep fishpond, or lake. Ocelocelot isn’t so much playing the instrument as exerting a strange kind of magnetism or psychic influence on it, something that emanates from her very body, walking around the device while making her magic passes. Her unsettling tones are almost supernatural; she ought to do a team-up with Darren Wyngarde some time.

Moral Holiday appears to be Phil Todd himself; given that I have not heard anything from him for a number of years, I shouldn’t be surprised at his “new direction”, and it’s his own warped take on the electrop genre complete with half-working synths, minimalist instrumental stabs, and a morose drum machine. While he himself likens the end results to Suicide and John Carpenter soundtracks, it’s also the sort of music likely to appeal to the “dark wave” crowd (if they still exist; I have no idea about the exact parameters of this genre, which might already be considered over-done and passé.) Todd’s upsetting vocal yelps on this track, called ‘No Forks’, are indeed a passable imitation of Alan Vega when depicting the fate of lost souls writhing in a rock ‘n’ roll Hell. Todd still achieves an uncanny “distressed” surface sound to his music, and his sparing use of the echo chamber is ingenious. Foldhead close out the disc with a grisly noise-wall assault, and ‘Taser Delerium’ is the work of one who doesn’t know the meaning of “restraint” when it comes to spewing out filthed-up fuzz from an insane synth. The synth was probably driven mad just by keeping in the company of Foldhead for a few months. This bughouse music was created by Paul Walsh from Smell & Quim, the 1990s prankster noise group which may or may not have included Neil Campbell and Stewart Walden in their ever-shifting ranks. While the above review may have a streak of “nostalgia” for the past running through it, this vital comp is emphatically not about reliving past glories and serves to remind us there’s a lot of good healthy noise swill being created in the UK, prompting us to investigate further outpourings from the Memoirs Of An Aesthete label. A joint release with Smokers Gifts and Absurd / Noise Below in Greece. Received 26 February 2013.