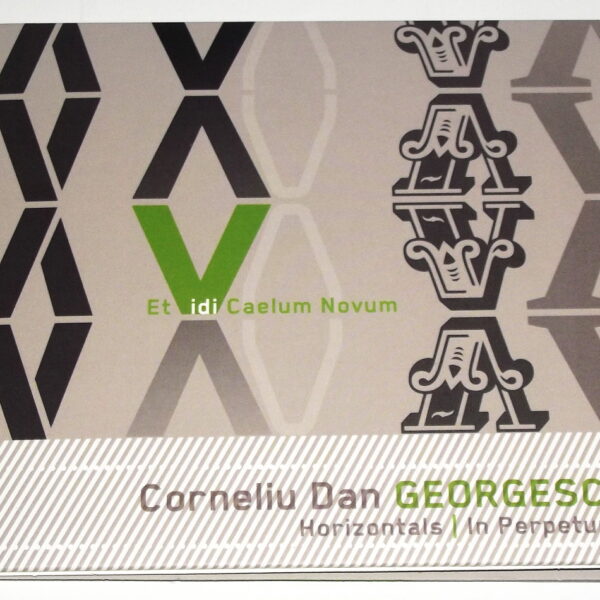 A range of mysterious states are explored and expressed – largely through subtle timbre modulations – across the three pieces on this CD, all of which (I’m glad to say) exist aloof of the dry planes of the ‘standardised academic avant-garde’ of the 20th Century, which ordinarily leave laymen listeners like me frozen. But while the evocation of ‘minimalism’ (of ‘Romanian’ orientation albeit) might lead one to postulate an artistic debt to one of the ‘big names’ of that genre, or else a tasteful (but unoriginal) time spent droning in cruise control mode, the term here explicates a distinctive structural simplicity that has as its point of contemplation the most essential ‘forms’ on which known phenomena are founded. The endless permutations of quadrilateral grids of Piet Mondrian – previously a dedicatee of Georgescu’s – provides one visual and spiritual analogue. The inverted commas on either side of the phrase ‘maximalistic minimalism’ envelope a nomenclature that accommodates a repetition of simple motifs expressed across a wide, often explosive dynamic range; a set of meditatively conjured variations that find easy residence in Georgescu’s snapshots of the ‘eternal flow’, suggesting a narrative development occurring not horizontally, but vertically.

Simultaneously confirming and refuting this hyperbolic notion is ‘Horizontals (Symphony No 2)’, in which saw-toothed intervals are repeated, accented and silenced (but never effaced) by brass booms, metallic clangs and Partch-esque percussive meandering. It proceeds in swells and sighs, punctuated periodically by capricious explosions and dissipations of activity, which somehow preserve a cohesive and strangely emotive whole. Conceptually, La Monte Young provides the earliest progenitor of this ‘stop time’ work, and a sense of endlessness that exceeds the piece’s 22-minute lifespan. That said, my feeble familiarity with such composition yields references like Philip Glass, whose sparse phrasing is reduced further still and imbued with the kind of atonal mannerisms lifted by Messrs Zorn and Zappa from their respective pantheons. In addition, the moments of majesty seem kindred to those found in Giacinto Scelsi’s archetypal dramas such as ‘Hurqualia’; their magnificence is mirrored here at least.

The composer justifies the titular linearity as a technical (and temporal) necessity, given the inevitability of duration as a factor in the listening experience, while reminding us that ‘opening’ and ‘closing’ – in the conventional sense at least – constitute false concepts in music that seeks to express ‘an idea or feeling of eternity’, wherein an immanent, archetypal mythology – ‘something transcendental, beyond sounds, instruments, forms and structures’ – implies a ‘longing’ for ‘the eternal and endless’. Difficult is it to assess the veracity of this description, but I find any scepticism silenced as the piece gains momentum, and shifting tectonics reveal subterranean magma, as if permitting expression to an otherwise ineffable reality: gestures become more forceful; the atmosphere increasingly monumental, but clearly governed as if by universal laws.

‘In Perpetuum (String Quartet No 10)’ displays a more fragile and tentative persona: strings agitated, sometimes plucked and teased to create a perpetual undulation visited by all forms of ‘eye floater’ micro-events happening upon the surrounding space. The resulting tension between perpetual and ephemeral dynamics produces a deceptively subdued field of activity in which little of note seems to happen, in spite of impressions otherwise. A more dramatic specimen, ‘Et Vidi Caelum Novum (Skizze Für Ein Fresko 3)’ (‘Then I saw a New Heaven – Sketch for a Fresco’) thuds open with Scelsian grandeur: booming drums, sleigh bells and a fugue-like choral furore threatens to overwhelm the listener with its religious fervour. The schizophrenia implied by the title’s mixture of Latin and German is evident throughout, as subterranean murmurs and hammered piano herald the imminence of some apocalyptic message to be revealed to the unsuspecting mind. The awesomeness of this eternal moment of (intellectual) unknowing is implied in the range of dynamic states exhibited throughout.

Though I feel eminently unqualified to pass informed verdict on this remarkable trio of compositions, the best recommendation I can offer is that it intrigues and excites me the way so much modern composition does not, and that intuitively I sense truth in the potentially hyperbolic explanations offered for the composer’s work. With every listen I learn less, not more about what I am listening to. So, what higher recommendation could I offer?