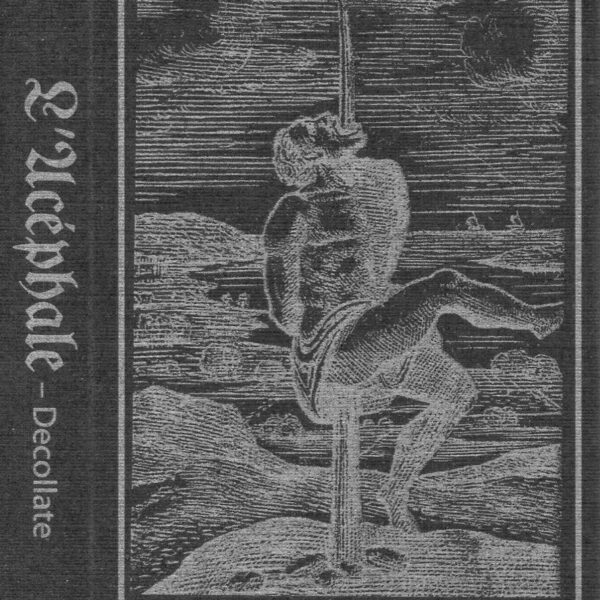 L’Acephale‘s latest release “Decollate” is a short five-track set on cassette that includes two original songs and three covers of songs by Emperor, Darkthrone and Current 93 in that order. For less than 30 minutes in total, Set Sothis Nox La and his merry musicians deliver some of the most militaristic, sabre-rattling, operatic and bombastic music this side of La Scala Theatre in Milan. Plenty of industrial, folk and ambient music elements abound here without the band’s essential black metal style floundering under so many different genres.

First up for the headless horde’s treatment is Emperor’s “Ye Entrancemperium”, a thumping martial folk beast with savage rhythms and riffs, a venomous gabbling vocal and super-bombastic percussion. Multi-layered at various points, the song is complex and murky. L’Acephale’s rendering of the track sticks closely to the original with details in the vocals and percussion being different and the production distorted. Then follows one of two original songs, “Sleep is the Enemy”, a seething sinister beast, laidback yet doomy, lurching into view with subliminal swamp-monster groans and growls and rhythms that slouch from somnambulist soldier march to frenzied blast-beats and chaos, and back again. And again. It’s a simple song to follow though with much of its emphasis on the quietly creepy atmosphere that envelops it.

Flipping over to the B-side, we find Darkthrone’s “As Flittermice as Satans Spy” given a dramatic neo-folk reworking that makes the song supremely sinister and inhuman. Militaristic horns, severe marching percussion, jittery mandolin tones and crabby misanthropic grim vocals render the track an implacable juggernaut experience. My complaint is that it’s not long enough to drive a listener totally deranged. “Passing into Sleep”, the second original track which might be a continuation of “Sleep is the Enemy”, is another quietly malevolent and oppressive piece with samples of droning vocal chant combined with operatic singing, percussion experimentation, guitar drone and piano punctuation. Again the atmosphere is the most important element here, more so than the previous original, allowing L’Acephale the opportunity to experiment with tone, space and texture.

Last up is a Current 93 cover “Allons vior si la Rose” (“Let us go to the Rose”), dressed Burzum-style in folk melodies and a lead guitar playing over a steady repeating rhythm and a basic drum beat. The ambience is a curious mix of not-quite summer folkiness and sinister blackness. The song ends all too quickly after a minimalist delivery and listeners are likely to feel a bit cheated that the cassette ends much too soon.

Thirty minutes for a recording, even if it’s an EP, are just too short and cramped for an ambitious and maximally inclined band like L’Acephale who like throwing everything they know or can reference into a big pot just for one song. The individual tracks go by far too quickly and, though some songs can perhaps sound overdone and overwrought, they all seem to need more development to become mighty huge structures of black metal evil.

One problem with covering other people’s songs and including them with your own work is that the song covered can show up deficiencies in your own song-writing and arrangements. This is true with particular bands whose work you’re covering and which happens to boast complex musical structures and arrangements – like Emperor for example. But I should think SSNL and company would have been well aware of the scale of ambition and ability needed to tackle Emperor’s work and what they needed to do to make their version succeed. The cover is very good indeed but L’Acephale’s own compositions on the cassette pale in comparison as a result.

As always, L’Acephale make no concessions to first-time listeners who have to come prepared with sufficient general knowledge worthy of ten university doctorates to understand the references the band tosses into its music. Fans will find this cassette an essential addition to their collections, as long as they realise it’s not likely to deliver to their high expectations.