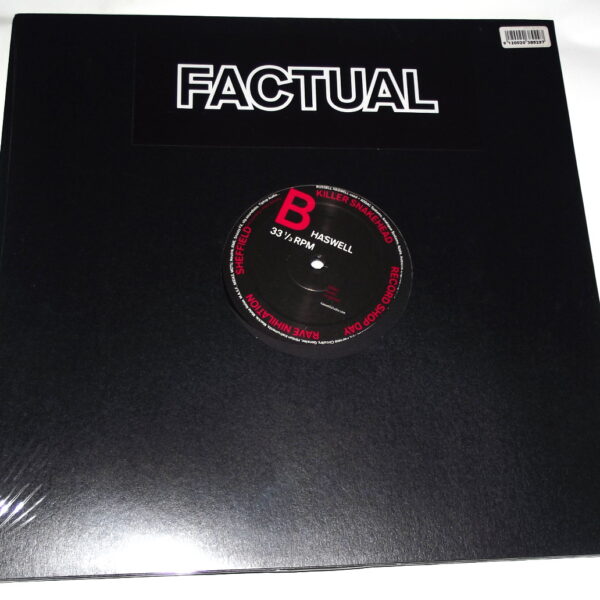 Clocking in at 28 minutes, this is either a very short LP, or a very long 12” single (take your pick).

The record kicks off with a track called ‘Black Metal Instrumental Demo’, though if you were expecting the genre’s usual emphasis on guitars you’ll be disappointed. Instead, a glitchy, reverb-drenched low pulse stutters into play, before being joined a few minutes later by random hits from a snare drum, not following any recognisable beat. The effect is not unlike listening to a (black?) metal drummer warming up in some vast underground cavern, his legs pumping away frantically at his double kick drums. After about 4 minutes of this, a warm fuzz of synth static enters and gradually buries the drummer alive. The drummer fights back with more regular hits from his snare drum, and the synth finally coalesces into a recognisable four-note riff. Having been beaten into melody, the synth retreats (shamefully?), and the stuttering drums emerge victorious.

‘Urban nOise’ is essentially the sound of a distorted synth wrestling with itself, while ‘Killer Snakehead’ features a looped synth line held in check by a regular pulsing dance beat. Highly repetitive, this sounds like the death-rattle of an old Sega Megadrive game that has crashed and is looping itself into infinity. ‘Record Shop Day’ is perhaps the closest the record comes to ‘pure’ noise, in the free-wheeling unstructured Merzbow style. Perhaps intended to replicate sonically the chaotic hordes of punters fighting over rare vinyl? Whatever, the distorted synth sound is again very redolent of 80’s videogames. For ‘Rave Nihilation’, the sound is stripped back to a meandering distorted synth line that simply wanders around a bit before expiring.

Taken as a whole, this record is sonically uncluttered experimental noise (with a small ‘n’), with a strong emphasis on distorted synthesiser sounds. The promotional material makes a point of highlighting ‘real-time, one take’ recording techniques, and whilst this makes for a very pure recording, for this listener at least, it often felt more like a clinical ‘lab-coat’ wearing exercise than the passionate kick in the head of more emotional and ‘busier’ noise. The record ends with ‘Sheffield’, a brief live performance, featuring more manic and frantic distorted synths swooping and swirling through an echoey hall. The live nature of the recording makes this sonically inferior to the studio cuts, but ironically the sounds here seem freer and more unhinged than most of what makes up the rest of the record.