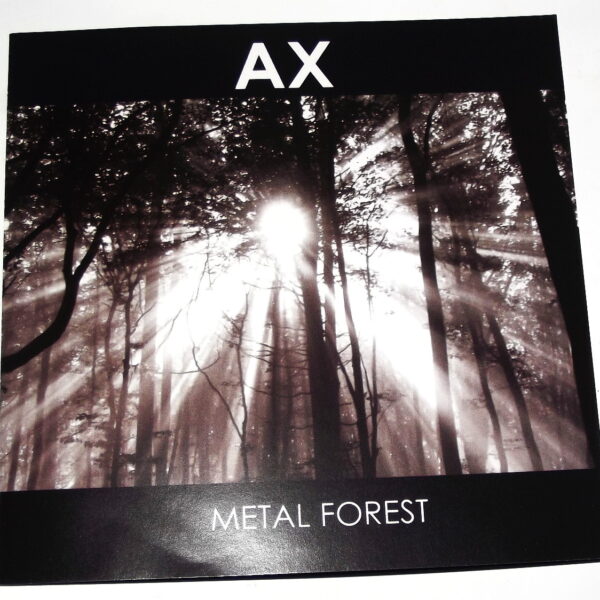 The material on this compilation spans 1994-1997, and is taken from three out of print releases on Freek Records. Despite the piecemeal construction however, this works perfectly as a standalone record, with a unity of both sound quality and musical theme.

The sound on Metal Forest is best described as a collision point between noise and drone. ‘Kortex’ kicks things off with a slow rhythmic pulse underneath distorted rumbling synth drones, building up a slow feeling of unease which is maintained into the building distortion of ‘Nova Feedback 1’. For ‘Heavy Fluid’ the sound moves into what sounds like long stretched-out notes plucked on a distorted guitar, with the out of phase stereo double-tracking giving the piece a thick structure, and pushing the music into drone metal territory. Add a few screeching vocals and this track wouldn’t be out of place on a Khanate album.

‘Theme One’ briefly envelops the listener in a big, thick, scuzzy wall of pure noise, before the title track sees a return of reverb-drenched drones. ‘Ax II: Track 1’ adds squalling feedback to the drone mix, with reversed squeals tearing into the soundscape like skidding cars, and a high-pitch shrieking like a whistling kettle. Somewhere in the mix, reverb chimes like bells, ringing for the end of the world. ‘Ax II: Track 2’ and ‘Nova Feedback II’ highlight the synth sounds a bit more, with the latter occasionally sounding like the BBC Radiophonic Workshop constructing soundscapes for the most deranged episode of Doctor Who ever. Finally ‘Cluster’ is back to the drone metal, with looped, buzzing distorted guitar sounds. Notes shift against each other uncomfortably, sounding not so much like an angry wasp as a menacing, brooding swarm.

There is plenty of droning noise at the heart of this record, but with a constant sense of movement this is never boring stuff. Recommended.