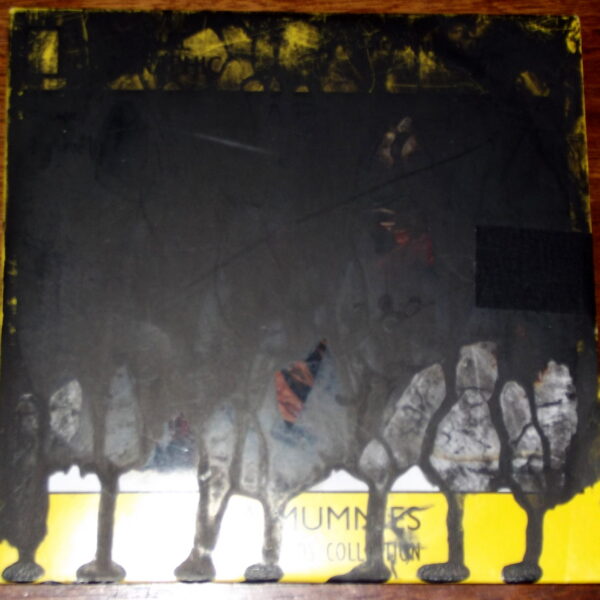 Fuck me. This gave me a headache. On the cdr it sez something akin to ‘Numb Sock Rinse’ which I thought was a great noise name… but the writing style was so aberrant that I couldn’t be sure if that’s what it really said. After spending two whole days analysing the cover I eventually spotted a sticker emblazoned with the name ‘Dave Welsh’ in the tinniest writing imaginable. Well, that got me mad. Dave Welsh, what a shit name. Utter toss. Not my thing at all. If Someone called Welsh Dave’ tried to sell me his noise works I would BUY!BUY!BUY! and if someone called Dave Walsh tried to sell me his noiseworks I would spit in his EYE!EYE!EYE! – at one point I chucked this CD/R in me bin so profoundly upset was I. Me mate Andy visited later that day and fished the thing out. Andy makes a living from bin robbing and coffin bugging. He’s the finest in Burselm. He was intrigued to know why I was binning the works of Fritz Welch! FRITZ WELCH!!!! Here’s a tip Fritz, it’s an ageing population and we have nothing to live for, if you cause me massive eye-strain-again with DELIBERATELY TINY PRINT, ‘pon my turning the age of 70 I’m going to shoot up some PCP (or the future equivalent which will hopefully be much better) strap some home made explosives to me noggin and come a calling for you, YOU SMALL TYPE BASTARD. Anyway, it was nice to see Andy and hear all about what’s happening in the world of bins and coffins. I had a quick browse of Fritz’s web site where he bangs on no end about ‘Human Sacrifice’ which is all right by me, without human sacrifice how will the gods know we love them? Ahhh, now I see. Human Sacrifice = Numb sock Rinse. Everything always makes sense in the end. Somewhere on the website something says something about how Fritz has got an urge for ‘percussion and objects’ – I love percussion. I love objects. I had a little hope a little flower in my little heart that Fritz in his own tiny writing way was going to build the bridge that joined rockabilly and noise in perfect perfection. Also on his website it says he plays gigs in old Hair Dressing salons. I love hair dressers. Lorna’s Salon in Burselm is like a CHURCH. When I quit the noise game I’m going to become a barber. You can go to the worst, deprived hellhole on Earth and I can guarantee the one man doing good business and loved by all is the fucking barber. Honestly. I’ve done me research and it is an irrefutable FACT. I’ve gone all happy now. Apologies to Welsh Dave for the earlier threats. Oh shit. This isn’t rockabiily. You can file this under ‘sound poetry’ . It’s vocal yammer. Where’s the bloody percussion I was promised? If you wants some lazy ass journalism, I can put it thus if you like vocal theatrics ala Bllood Stereo, then you will surely like this. Me? I find a lot of this thing upsetting. When I see some youth gurning and wheezing and spitting out nonsense I get an urge to kick them straight in the face and send them back to the hell from which they came. I like Keith though. On this CDR he does one long 30+ mins thing with lots of silence. Silence to me is a track break. It says this track is over and another one is just around the corner. To me this is a CDR with 40+ tracks. Keith’s gargling and shouting is committed stuff. Clean sound but it’s not ineffectual. I can sit and listen to this and imagine a lost tribe somewhere, living under an all mighty rock (perhaps they live under ground?) and over the years they have heard a rumour of a rumour of a rumour of a rumour of something called ‘thrash metal’ and they are all fired up by it. With little idea of what is and no instruments at all they create a studio out of the skulls of beetles and set about creating and recording some thrash metal and then they get involved with the international tape trading scene. Am I being a twat? Possibly but no one cannot deny how nice it would be if 90’s noisecore fans / bands (7 Minutes of Nausea, GeroGeriGeGeGe and the like) gravitated to this kind of thing and anyway what could be more metal than ‘human sacrifice’ it’s a lot more metal than a numb sock rinse. Pardon me. There is percussion on this. It’s not just mud from the lungs, there is some noise and effected trickery…but not much, it doesn’t overpower. It’s all quite sparse. Sounds like it could be edited together from live recordings (or even one straight take) with either no overdubs or very minimal ones. It’s all very CONCISE. Compact. Well executed and deliberate. There’s nothing out of place here, there is no fat to trim. In short this is an evocative and enjoyable release – definitely one I’ll be coming back to for repeated listens.