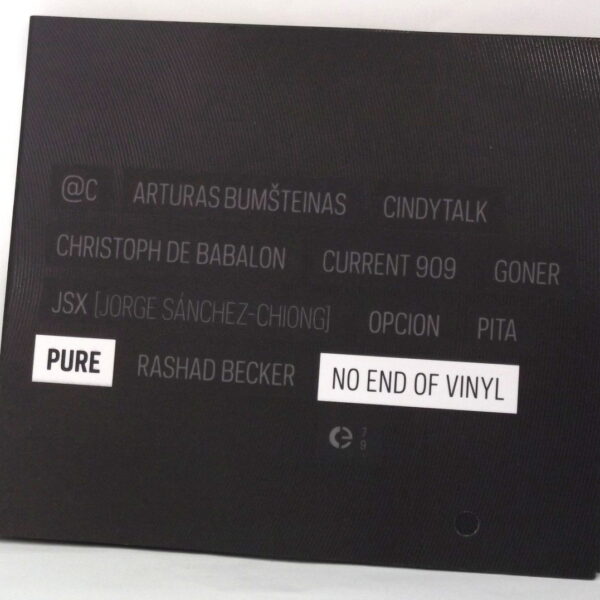 Pure I believe was this electronic extremist who did stuff for Mego and attained notoriety for sampling the run-out grooves of vinyl records to create his very austere digital music. He’s still milking the “end of vinyl” concept apparently, since on No End Of Vinyl (CRÓNICA 079-2013) he’s enlisted ten prominent electronica creators to contribute tracks (some of them remixes) based on the theme. Even the sleeve itself is cleverly overprinted with concentric circles on black card, so that it looks like an idealised vision of microgrooves. Hereon, @c – slow and increasingly menacing fragments of gurgly broken sounds; Christoph de Bablon – remix of the original ‘The End Of Vinyl’ to produce a boring and pompous synth tune; JSX with his ‘Biological Agents’ and a decent piece of techno-stealth dredged from the sewers of Paris; cindytalk hurling buckets of digital water over a cliff in slow motion; Goner’s remake of a Pure track, using too many effects and gimmicks until incoherence dominates; and Opcion – an effective object lesson in “less is more”, with chilling desolate tones. We also have the very interesting Arturas Bumšteinas, whose ingenious ‘Opera Povera’ was probably constructed from classical music on vinyl, and exhibits a painstaking craft that is notably absent from the other auto-piloted submissions. But Rashad Becker is also memorable with his strangely rotating and colliding elements, spinning in layers like a wall-sculpture made of 100 bicycle wheels; and Pita, whose solo work I don’t seem to have heard for a long time now, and whose ‘This & That Edit’ has the kind of purity of form that Terry Riley would adore, plus a clarity of tone that’s like spring water on an otherwise rather sludgy-sounding comp. All of these contributions show us possibilities, ways of opening out an idea through remaking and refitting. Yet very few of them really reflect the vinyl-ness of records, apart from a few audible samples of crackles and clicks which surface in some of the contributions, and the digital “identity” is very much up front – processed, artificial, impossibly “perfect”. There’s a double-edged irony to all of this, since (as the label webpage indicates) the original release of fourteen years ago was full of millennial uncertainty about the future of media carriers, and recorded music in general; it was asking the question “will vinyl die?” and weeping a solitary tear as if every CD being pressed were another nail in the coffin. Now of course, the way the tide is turning in favour of vinyl and analogue media again, it seems the question is whether the digital has a future.

Speaking of your “millennial uncertainty”, the Norwegian quartet SPUNK just completed an extremely lengthy musical project which they started in 2001. Every year they would meet up to play a single tone and continue to hold it as a sustained drone, using mostly acoustic instruments (strings, brass, woodwinds) and voices. By the time they had finished they had completed a realisation of all 12 notes in the scale. Now the collected recorded results have been released as Das Wohltemperierte Spunk (RUNE GRAMMOFON RCD2140) as a six-disc boxed set, meaning you get two of these drones per CD at approximately 30 minutes apiece. The players involved are the lovely Maja Ratkje (constantly proving herself as a formidable all-rounder – singer, composer, improviser, noise artiste) and Hild Sofie Tafjord (see previous remark), plus the cellist Lene Grenager (guesting from +3dB Records) and Kristin Andersen who plays trumpet and flute. Although not remarked on in the press notes, that’s an all-female team making this ethereal yet wiry music, and among the first things you notice is how unlike American minimalist (masculinist) music this set is: and by unlike, I mean it’s intuitive instead of programmed to death, sensitive to the listener rather than running them over with a relentless systems-based steamroller, and almost completely lacking in the enormous ego drive that, for me, characterises the long-winded work of some composers in this area. This isn’t to say Das Wohltemperierte Spunk is a set of drifty ethereal wispiness (though some may hear that at first), since there is a very simple structure at work in realising the 12 notes in a pre-determined sequence, drawing ideas about mathematical composition from Bach, and there’s an unflagging determination to see the work through to the end over a very long period. I also like the fact that they did it in a variety of locations around Oslo, including a cabin on a fjord, and a mausoleum with a very long decay time within its walls. Usually they played to a very small audience; no wonder they regarded this as a “secret shared among…closest friends”. Clearly the four of them found it a very unifying experience, and one of the keywords (which may get up the backs of some readers) is “meditative”, but there is no pretentious pseudo-spiritual psycho-babble here, just a commitment to finding (and creating) enough space to play and to listen in a very simple way. In the interests of disclosure, I’ll admit I haven’t got much beyond D# in the set so far, but even so I can report that these drones are far from being flat, smooth or boring progressions; there’s a very ragged surface to all the performances, with unexpected angles, corners and planes fully on display, and much of the genuine spontaneity that we would hope for from good improvised music; plus much variety and dimension in the tones and timbres that are being explored. In short, listening engagement is guaranteed throughout these 12 slow but intense pieces. Methinks that the effects of hearing it all in one sitting would be considerable. (13 February 2013)

From Groningen in Holland we have the fairly bizarre combo Sexton Creeps, who for their third album Alex Hotel (HEILSKABAAL RECORDS HK023) have teamed up with the sound artist Kasper van Hoek. The Creepsters pride themselves on their international membership, their shared passion for psychedelic music, and the use of home-made instruments alongside the more traditional guitar-bass-drums-keyboard setup. The opening drama ‘Homophone / The Unicorn Dies’ is a genuinely odd escapade, mainly because it works through about three different dynamic shifts, starting off as a quasi-Nick Cave dirge which lumbers forward for some minutes before exploding in the centre with a crazed echo and guitar screech-out of acid-fried freakery, then descending into the quagmire of a dark fairytale acoustic ballad sung in a minor key. The Sextoneers may come on like indifferent, slouching stoners, but when a certain switch is flipped upwards, they instantly transform into vibrant electric eels. ‘Pissing In The Woods’ is also a rum fish, a moody spookster with a compelling organ sound that would make Tom Waits trade in his golden trilby, and mumbled lyrics which may be packed with menacing symbols. As for ‘Elderly Ladies’ Umbrellas’, it confirms the band’s penchant for formless slow slide-guitar jams underpinned by eerie wailing effects; it’s as though they’d read all about Pink Floyd (1967 period) and their lost and unrecorded performances at the UFO Club and decided to reimagine for themselves what it must have been like to be that band. Did I forget to mention the contributions of the vocalist, J.C.? He’s got a great line in lugubrious mumbling when he’s doing the creepy death-ballads, but also capable of erupting into shouty and screamy blasts of horrifying proportions when the occasion demands it. While I can see this strange record appealing to the prog and psych revivalist brigade, there is also a thoroughly weird strain that writhes at the heart of this album, and the listener will struggle to pin it down like a wriggling centipede in the core of your apple. Bert Scholten did the unsettling artwork of sleeping bodies packed into a compressed grid, like human sardines. (28 February 2013)