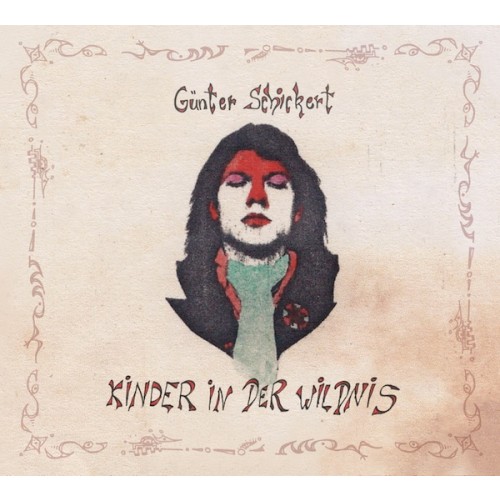 What have we here? It’s a blast from the past courtesy of one Günter Schickert who was active in the 1970s and early years of the 1980s but whose work since then has been obscure. His output apparently was small and this reissue of work first released on cassette in 1983 and later subject to another cassette release in the 1990s consists of material from Schickert’s own archives. The songs are not related to one another and there are two bonus tracks tacked onto the end of the album which were recorded in the 1980s and which show influences from the Deutsche Neue Welle movement , analogous to New Wave in the UK of the same period, that hit the German rock scene.

Schickert’s signature is repetitive looping rhythm guitar riffs which appear on nearly every track on this compilation. The entire album sounds like early Amon Duul II at their most shambolic and eccentric; the music sounds as if it’s about to full apart any moment and only fraying string and old sticky-tape are holding it together. Environmental field recordings, chanting vocals with slight reverb, psychedelic guitar and mesmeric tribal rhythms are some of the elements that make this music very idiosyncratic in a scene known for a lot of wacky and way-out experimentation. The throbbing, thumping rhythm patterns of “Rabe in der Nacht” have such a hypnotic vibe that even Schickert himself might be in thrall to it: it reappears in slightly changed and sped-up form in the title track that comes much later on this collection.

The music is dark dark dark and very trippy in a very heavy way, with lots of strange put-on voices and bird noises (which include Schickert’s own attempts at imitating crows), swirling synthesisers, bedazzling effects and a thick atmosphere that alone could make your head spin. Each track seems weirder and more unsettled than the one before it. Tracks 3 and 4 are highly immersive and repetitive pieces of musical mesmerism while “Suleika” seems a bit more settled and structured. Even then that track shows signs of falling off the straight and narrow path into a wild world of trance psychedelia. Schickert’s vocal delivery here suggests a knowing psychopomps beckoning us to follow him into the underworld of spirits, from which we may never return.

The original album’s highlight is the title track which features Schickert’s then four-year-old daughter going head to head with dad on vocals at full tilt. (Ah, it must be fun being a little kid when your dad is an experimental musician who plays by his own rules; you can count on being drafted in as session musician and singer, and if your dad is named Campbell Kneale, you even gain credits as a fully fledged artist and presumably earn the same amount in ice cream currency as adult musicians do in real money.) The little girl goes for her life with reverbed voice against Schickert’s flubby trumpet and while the rest of the music stays steady throughout, there’s an air of slight craziness as a result of the singing.

The bonus tracks have a clean sound and the music seems much tighter and a bit subdued. Schickert’s voice comes over as curiously flat and a bit disembodied. The overall clinical effect may be intended but after the glorious messiness of what has gone before, the extra songs might seem a bit disappointing to some listeners. Now I’m not insinuating that the Deutsche Neue Welle movement was not a good influence on German pop and rock; indeed that particular music trend from the late 1970s seems to have disappeared from most discourse on German contemporary music and rarely gets a mention elsewhere. Probably the closest most people come to referring to DNW is when the names of bands associated with that scene (Malaria!, Deutsche-Amerikanische Freundschaft to take the best-known examples) are dropped into conversation. It’s just that Schickert, in trying to accommodate and adapt some of its influences, comes off second-best while updating his sound and the result ends up the musical equivalent of a caged bird, severely restricted in its movements and unable to fly.

Nonetheless this is a mesmerising recording from the history vaults of Seventies German rock which deserves to be much more widely known.