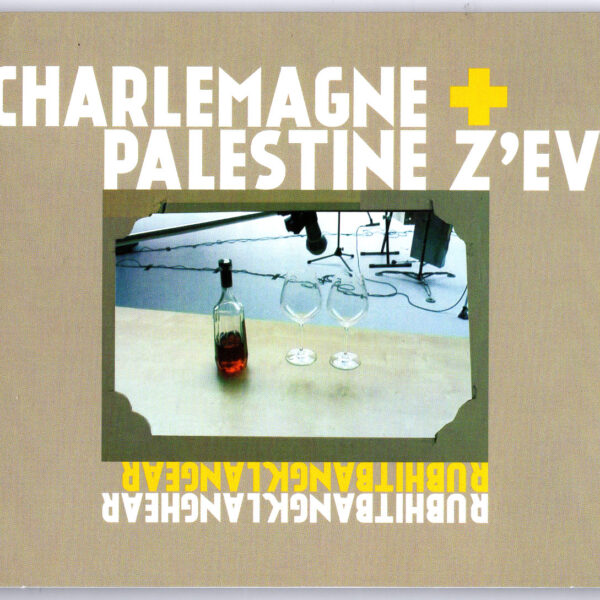 Well here I am, back from travelling through Father Christmas’s black vortex and spat out the other side, not looking back like Orpheus – no way – stumbling into the light without a drachma to my name, just a number of scrawls on the back of some wrapping paper which I will endeavour to transcribe for you in the here and now being as it is such a beautiful February morning the sun is shining the birds are singing and it’s time to give a tip of the hat to some cult objects of the 21st century earth-dwellers that TSP has jiffy-bagged my way at some point or another. Call it a round-up, if you want. Phew! Let’s hope we can make it and still go and soak up some vitamins.

In no particular order, then:

Let’s start with Charlemagne Palestine and Z’EV with their double CD of collaborations and solos from last year, Rubhitbangklanghear Rubhitbangklangear (SUB ROSA SR340). Issued on Sub Rosa it is as you would expect a fine and pleasing production visually and tactilely, in the classic tradition of ‘professionally’ produced CDs, an art multiple for you to own and hold, and sometimes to hear. Which is what happens if you place one of the two shiny plastic discs in an appropriate playing device.

For this tag team match-up Charlemagne plays his carillon, hitting it and pedalling for all he’s worth, and Z’EV, as you might expect, also hits things – he also does some scraping, and maybe a little tickling. Funnily enough, although Charlemagne is playing tuned percussion, melodic content mostly comes from the tonalities of Z’EV’s percussion, padded basslines creeping from the lower depths and mournful wails from the guts of metals. The carillon plays like an extra-slow-motion version of Palestine’s strumming music, large and clanging like a clapper ringing in the empty Belgian sky, cycling through the limited intervals available continuously, although in an ambulatory rather than mechanical manner. Around these coded, elephantine dabbles, giant ripples, hints of bells ringing the hours in fresh air, Z’EV’s percussion dances, organic and low, like a bodily function, yielding and pulsing with the hidden energies of the lower centres. It’s a strange mix of the earthy and airy, the heavy and ponderous and the light. Students of the cabala may in fact be able to apprehend which precise path describes the experience evoked here, there are hints of pattern and systems in the combination of elements notes and parameters. Like an uncertain day, though, tentative clouds hinting at promise yet masking the sky, it doesn’t give up its secrets easily. Or perhaps its secrets are there for all to hear, merely registered on a more instinctive, bodily, level. Bells in the sky, elusive moods from a big sound. It should also be noted that on the second CD you get three solo pieces, one Charlemagne, two Z’EV, the second Z’EV one being the length of an album itself (40 minutes plus) and a thoroughgoing burrowing into rhythm and physically derived pulsation which is very useful.

Next, also on Sub Rosa, Zahava Seewald and Michaël Grébil – From My Mother’s House (SR349).

These artists, who delivered an instalment of John Zorn’s Radical Jewish Culture series as part of Zohara present here, using the works of various Hebrew and Jewish poets as a starting point, a text-heavy, implication-dense montage of thought and reflection, personal and cultural, on the Jewish diaspora, poetry, Yiddish song, Auschwitz, memory etc. elided and superimposed together similarly limpidly, although without the sheer ravishment of mysterious sound, as Luc Ferrari. In the way material is put together there is also a faint echo of say, Pousser’s concrete paeans to Liège. As with both of those composers there’s an interest in speech and the sound of the voice, here Zahava sings and recites, dialogues, monologues, poems. Other voices are layered or respond. There is a mix of other sound sources: domestic scenes, snatches of Middle Eastern radio and melancholy reflection; Singing, composition and improvisation all edited into a gliding digi-montage which in its overall form reminds more of a visual-less film than a piece of music as such. Subject matter and treatment may also recall literary works (inevitably perhaps given the poetry-based nature of the work) including the Sebald of Austerlitz, the Emigrants etc. Also certain mittel-European art films. Heimat perhaps? Buried in the booklet text is a dedication to Chris Marker, which provides some sort of context and hints as to where the artists are coming from and perhaps what they hope to achieve; in fact I found the whole thing best appreciated as an audio analogue to a film such as Sans Soleil, although I remember Sans Soleil, which admittedly I haven’t seen for quite some time, as being far more invigorating – aesthetically and imaginationally intoxicating. This does, however, share a wide-angle view of humanity and cultures, obviously adjusted for subject matter, temperament and concerns, with scenes and locations passing and cutting adroitly and transparently; furthermore, it is undoubtedly one whole text-sound-music essay rather than a musical album of discrete songs.

As to content it is historically aware, perhaps even saturated. The texts themselves (although not all of them) do not shy away from blood and flames and travesty, framed musically by the always pristine – perhaps even aloof – formalism derived from cinematic editing and to some degree musique concrète. There’s a sense of the dry bitter taste of ashes or Passover herbs and of lamentation, or in some sections the cloistered dryness of an unenjoyable university course or anonymous cultural institution.

The voice is ever present -mutter, murmer, mother. One work of the poet Rose Auslander in particular seems a keystone for the project, regarding as it does questions of a ‘mother tongue’ ‘father land’ and portraits of humanity and peoples; an excavation of the cultural and social through the personal. As to temperament I found the piece in parts rather heavy going, and sometimes cloyingly melancholy. There is certainly an air of introspection and inner inquiry on both a personal and a cultural level. Needless to say a lot of hard work has obviously gone into the work, but the overall tone, and a lurking sense of the didactic, does colour my response to it. Allowing for quirks of personal taste, however, it certainly lives up in some respects to its inspiration from Rose Auslander, reflecting her neologism ‘Menschmosaik’, i.e. a Mosaic of Humanity, presenting some sort of collage of the Jewish diaspora in Europe over the years, united by shared culture and history.

As a personal investigation and rapprochement through art with some weighty concerns it contains plenty to unpack and engage with, textually and formally, even if it doesn’t necessarily inflame the non-analytical levels of the imagination ( above and below) in the same ways as Charlemagne Palestine and Z’EV do 1. If I find it less than satisfying emotionally, it does however as a whole showcase an abundance of material, emblematic of a culture that may be unfamiliar, to engage with, or at least encounter. Which must have been one of the artists’ aims, and is surely a worthy one. Whether that makes for wholly successful art or not. Well, I’ll evade that thorny question and let you decide…

Unfortunately, I have at this point run out of steam in my rounding up. The round is only a hump, the circle is not unbroken, it has turned into a parabola, distending as it has from the concise to the wordy. Two items do not a round up make, I know, the good news though is I did manage to have a walk in the sunshine before it got dark – the vitamin D was excellent, since you ask – , the bad news is that I will endeavour to continue to review some of the pile I have here as soon as I can. Stand by for more words…