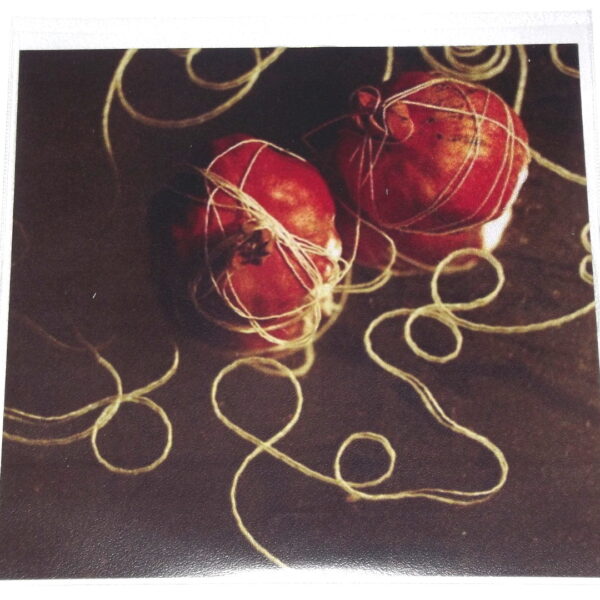 For a record of dedicated single-minded droning music, you could do worse than dip your fuzzy face into a bowlful of the NAR LP (BORING MACHINES BM045) from DuChamp. This Italian composer is based in Berlin and has devoted her debut LP in search of a sound that evokes the memory of her mother. This Proustian quest is focused on a single sound, that of her mother’s hair-dryer, which she studiously attempts to recreate using musical instruments (keyboards or guitars) to create drones, and each of the five tracks approaches this psychological task in a slightly different way; some are comforting, some are dark, most of them are extremely hypnotic in some manner. It’s as though DuChamp were lying on the psychiatrist’s couch and putting herself under a hypnotic trance, the better to delve into hidden memories. What confessional revelations might she revelate? Not much, as it turns out, as none of this music makes much effort to transcend the simple mechanics of process art, despite her high-minded aspirational titles such as ‘A way to grasp joy immediately’. I’m all in favour of retrieving childhood memories however, so maybe this record has a personal dimension for its creator which could qualify it as a success. She herself has not been in pursuit of exorcising family demons, and she speaks of a feeling of comfort; she associates the hair-dryer drone with compassion and stability. The actual sounds she makes have a lot of weight, and a conviction which arises from the way these drones don’t vary much for the duration. I particularly like ‘A worship’ with its very simple three-note motif and the creator’s heartfelt ritual chanting; it’s a strong combination of the stern and implacable meeting up with the delicate and wispy. DuChamp is also a scientist who works with the NMR Biosensor and curates an annual music event called Occultofest. From February 2013. 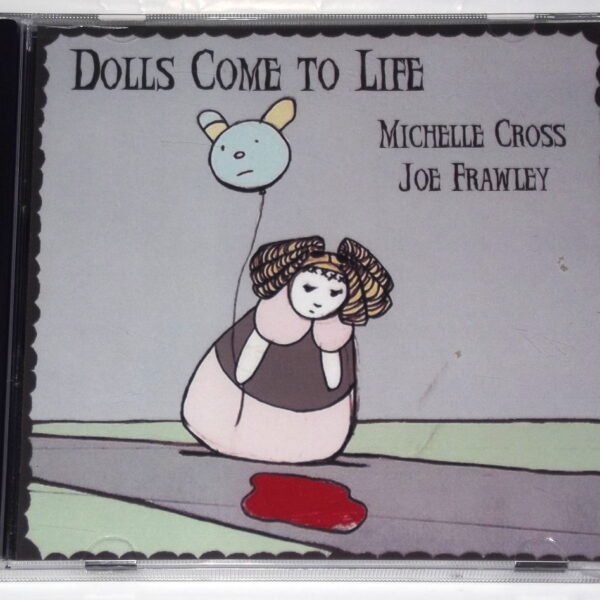 Dolls Come To Life (NO LABEL) is a team-up between the singer / pianist Michelle Cross and the experimental composer Joe Frawley. We’ve followed Frawley’s solo works for a while and regular readers will know we have a lot of time for his exquisitely-rendered miniaturist dreamscapes. He seems to be the ideal co-creator for this album of wistful and enigmatic songs and tunes, which expresses some poignant observations about the human comedy through the metaphor of dolls, marionettes, and other playthings refracted through a slightly darkened view of childhood. Both artistes are clearly concerned with narrative themes in music (a characteristic which many 20th century modernists tried to destroy), and are incurable romantics on a par with Dante Gabriel Rossetti. The album is structured around Cross’s songs, and while she may not have the gift for a memorable melody, there is much craft in her playing and her singing voice is distinctive. Her take on the old chestnut ‘My Favorite Things’ is one highlight; her voice is husky and desolate, and she sounds like a cross between a recovering junkie and a psychopath, acting out the role of the creepy family member they keep locked in the attic. Julie Andrews fans would probably wither into a raisin when they hear this rendition, but it’s got an astringency that fits the keynote of this release. Frawley’s contributions are the arrangements and sound collages; he takes the album off into the realms of dreamland with his unusual electronic compositions, and the snippets of spoken word which leak into the fabric in his characteristic manner. Even the singer’s voice is passed through his sampler, allowing him to weave fantasy versions of the songs. His compacted melanges of sound are never less than beautiful and always highly evocative. Rather than opt for the all-out surrealist experience that he has concocted on previous solo works, he uses his effects very sparingly, in service of the themes and narratives suggested by Cross. It’s true the storyline is allusive and doesn’t have any clear payoff, so what happens when Dolls Comes To Life isn’t exactly clear, but that’s where your own imagination comes into play. Guest musicians Win Ridabock and Tracy Kroll add flutes and percussion, and Brandy Pudzis did the cover art. From 14 February 2013. 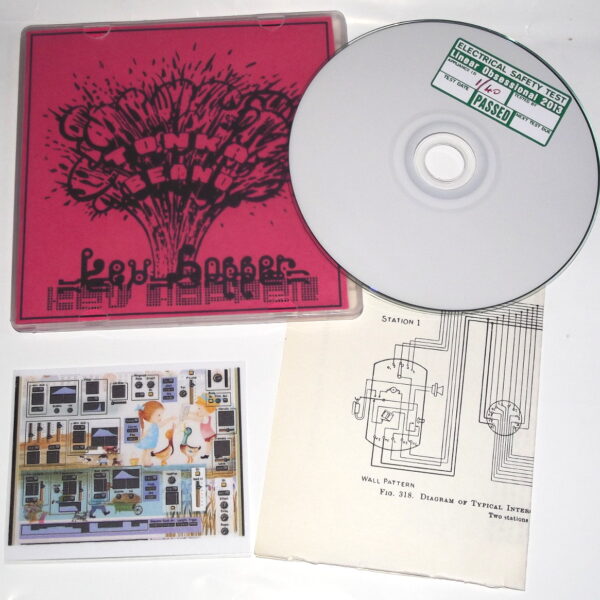 English improviser Kev Hopper has his solo electronic music compositions collected on Tonka Beano (LOR037), released by his friend and collaborator Richard Sanderson on Richard’s Linear Obsessional Recordings label. English improv veteran Hopper constructed all the music using Reaktor, which is unusual music software in that it allows (positively encourages) its users to take the modular parts of the system apart and reassemble it on their own terms, thereby arriving at wholly unique settings, samples, interfaces, and music-generating scripts. On the face of it, this seems a very creative and artistic alternative to simply settling for pre-sets on a keyboard or using any given music-manipulation software out of the box. To his credit, Hopper has certainly succeeded in devising some highly unusual blipperies and blopperies here, and he aligns or overlays them in eye-popping combinations, using a lot of good humour in the process; as if aware of the vague nausea that can be induced by such odd digital emanations, he names one track ‘Indigestion 2012’. There are atonal tracks and melodic tunes (the latter even have a pulsebeat sometimes), and Hopper exhibits his knowledge of musique concrète and glitch music of the 1990s. Even so, I regret to report I found the album mightily unengaging; there isn’t enough spirit or force in the compositions or the execution, and each track toddles on its path in a disappointingly polite, ineffectual manner. Each tune seems boxed-in, unable to break out of its virtual flattened existence in the machine. One sincerely wishes that Hopper would exhibit more boldness, a touch more of the fire and passion we associate with his bass-playing in the band Stump. If purchased as a download, you get a 22-page booklet of explanatory notes and screenshots of the Reaktor settings; the physical limited edition CDR was issued with inserts. From 18 February 2013. 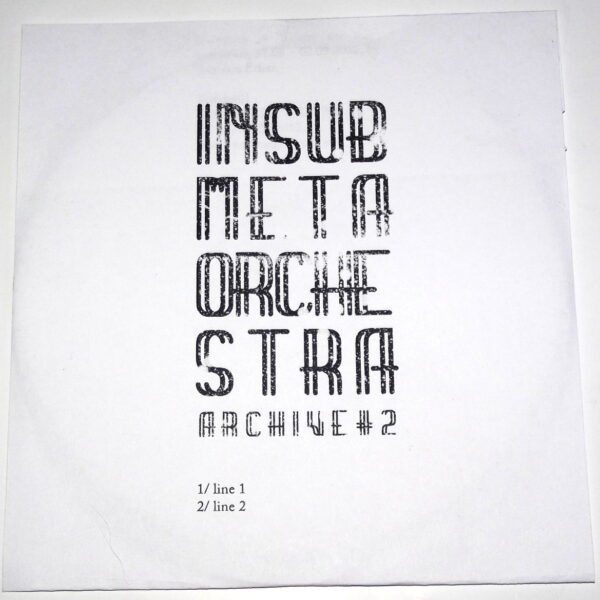 From Switzerland, the Insub Meta Orchestra release a rather marginal experiment on the CDR archive#2 [insub40]. By marginal, I mean they seem to be exploring these pathways chiefly for their own purposes, and probably use the information as part of their private “archive” to assist with continuous improvement. On ‘Line 1’, they hold a single tone for 18 minutes, doing their best to gradually increase the “timbre and spectrum” of the drone; although this slow-moving exercise threatens to be a completely sterile non-event, the music suddenly catches fire for the last five minutes, and the players come close to generating the “sonic micro-climate” they are aiming for. They see themselves as sonic scientists perhaps, creating tiny worlds with their own atmospheres and galaxies. There’s certainly enough of them to equip a well-funded laboratory; 45+ musicians from Switzerland and elsewhere are reckoned as members of the Meta Orchestra. On one level, they get results simply by aggregating so much sound in one place at once. ‘Line 2’ is another long and continuous piece, divided into two or three episodic “blocks”; the semi-structured nature of the work will only reveal itself through changes and shifts that pass by at a dreary, glacial rate. None of the sounds made by orchestra members are particularly noteworthy, but this may be a deliberate strategy; rather than allow “superstars” to indulge their technique, there may be an agreed compact to dissolve one’s identity in the shifting nebulae of clustered sounds. This collective approach means the band are unlikely to be nominated for the “Best Espousal of Ayn Rand Philosophy” prize at the next Mercury Awards. This year-old item is probably the last piece of “tangible product” we’ll get from the Insubordinations netlabel, since they’ve taken a completely digital path since then. The last physical object I got from them was an empty screenprinted package. From 5th February 2013.