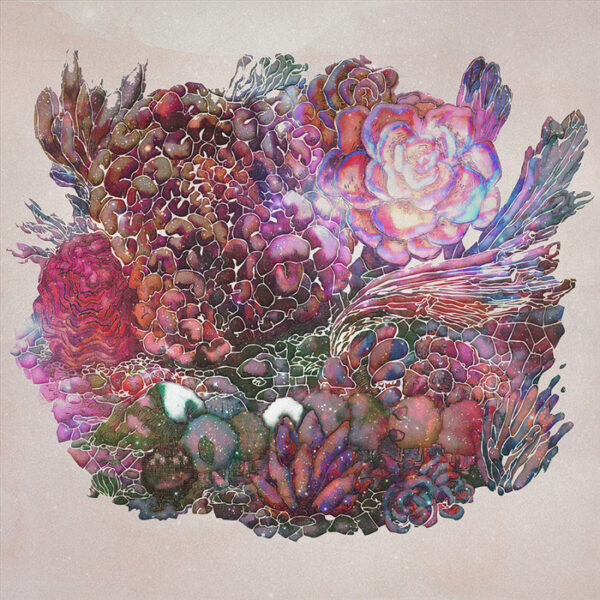 Originally released on cassette, this self-titled debut from one-man project Kwjaz had to be issued on vinyl and CD due to the attention it garnered in the musical underground. Easy to see why too because even on first hearing I was instantly transported away into a hidden universe of strangely soft-glowing ambient colours and lush forests of shrill glittering sound and light textures. Kwjaz is the brain-child of San Francisco native Peter Berends so one presumes that this is the music project he was called upon by Kismet to direct; with his background steeped in the popular music and culture of that fair city, and that cornucopia of fine sounds Aquarius Records located not far from his neighbourhood, he really had no choice. The CD version of the album comes with the original two 20+ minute tracks plus two bonus pieces. (Dontcha just hate that when you’ve already bought the cassette?)

“Once in Babylon” ranges far and wide in musical inspiration and influence but the most interesting part comes about the 8th minute with a languorous beach-combing rhythm strolling by while space-lounge tone effects flutter about and a trumpet trills overhead. Our beach-comber soon reaches a discotheque and from there on it boogies sedately along the dance-floor. Little spaceship noise squiggles wobble high in the pulsating atmosphere and trumpet tones parp-parp by. Next think you know, you’re underwater in a funny sub trawling along the sea-floor while gloopy green currents of water slide past the port-hole. The track seemingly describes various experiences that inhabitants of a Golden Age of Mass Culture and Consumerism enjoyed over 40 years ago: there’s plenty of muzak and elevator music to pig out on.

Needless to say, “Frighteous Wane” is the flip-side to “Once in Babylon” in concept as well in the album’s original cassette format: it’s queasily psychedelic, a bit cold and clinical in parts – it’s the music that might delineate the hangover that comes from too much consumption of the most banal and mediocre experiences and material goods of the decades in which restraint, good sense and taste, and foresight were prominent by their absence. Nightmarish drones of a deliriously deranged kind are beguiling in their own way and even though you know you’re going to feel a bit sick, you can’t help but follow the music where it will. Withdrawing would give you anxiety attacks. You know you’ve made the right decision because the music does take you into some wondrous dimensions of jewelled sound and mood melody, all veiled with a slightly sinister atmospheric veil. The best moment comes about the 15th minute with a detour into an odd world of childhood tinkle toy jewellery box nostalgia and kitsch Oriental gardens of neat pagodas, little bridges over artificial streams of goldfish and carp, and cherry trees in perennial blossom. The whole vista is a little nauseating.

Of the bonus tracks, the unexpectedly short “A Certain Sprout” dallies in Sixties lounge nostalgia with analog synth melodies made a little creepy with touches of cold ambient space tone. “Elevation: Elation / Jah Wad” consists of a chain of various musical snapshots that might have come straight from an old-time late Seventies radio station playing songs straight through with no station announcements or commercial breaks. Overall though the bonus pieces don’t add anything new to the album that we don’t already know from the original pieces and some of the music on “Elevation …” echoes “Once in Babylon” with its mixture of beach-holiday ambience, lazy tropical rhythm and wistful nostalgia.

This album is the most intriguing of journeys into a realm that initially seems very familiar and nostalgic but threaded through with uneasy-listening elements that force you out of your comfort zone to confront perhaps some very uncomfortable truths about what the world you grew up in really was like. The best moments of the album are its most alien, the darkest and most ambivalent.