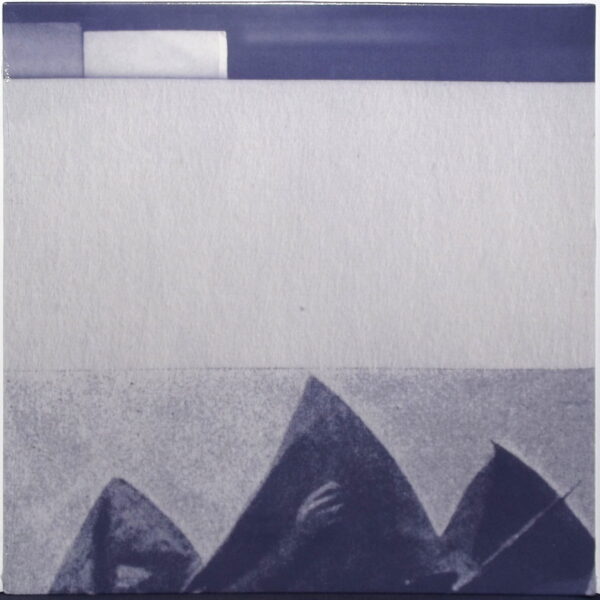 Two sides of pulmonary bass drones, growling sped-down tapes, and winter birch tree arteries of atonal synth – a kind of dystopian In C. Both these pieces are live documents of a new duo performing firstly, with all analogue equipment in Paris in October of 2011; the second, with a digital set-up this time, in Oreno the following June.

Giuseppe Ielasi runs Senufo Editions and has releases on Erstwhile, a 7” boxset on Holiday Records, and has contributed his mastering skills for certain releases on the UK’s excellent Consumer Waste label. Kassel Jaeger, I understand, has previous on Editions Mego, Senufo Editions, Unfathomless, and Antisolar.

The first side, designated Parallel, has tentacles like a giant deep sea octopus surfacing through the spume in horrific slow motion to drag an unsuspecting clipper to its watery end. There are bodies in the water but vital signs are barely registering. The flooded ship’s radio is producing tones that could be fractured Morse code or the reverb-tails of demonic tuning forks. Suddenly, the performance sounds weirdly digital – like there is the presence of software, but we are assured it is all analogue equipment being employed here. Then there’s the presence of what sounds like processed wind-buffeted microphones or the overheard heartbeat of something too near and too unspeakable. There is the sense that machines are at work here; but rather than helpfully and obediently carrying out the musicians’ sonic wishes, they are unstoppably macerating something organic. Tapes run backwards in one channel with digital artefacts running in the other. Fizzing, burning? Are they physically dismantling their machines in real time? I’m sure I can hear cassettes being manipulated/maltreated in the background.

Later, knives are heard being sharpened in an isolated tone-composition. Dangerous levels of moisture build-up on the leaves of plants, tendrils; excess oxide build-up on monolithic tape heads. The familiar and comforting sound of pitched down church organ, while the bearings on the capstan wear down and squeak.

Parallel is a massive, killer, sabre-toothed drone. Like the gates of hell are yawning open while the fragments of electronic pop song whip around in the maelstrom only visible now and again; like when anything accidentally gets sucked into the mammoth turbines of a hydro-electric plant – it doesn’t stand a chance. This is not quiet music; it’ll take your head off. Complex digital flutterings. Reinforced concrete stretches to breaking point, exposing the rusty reinforcement within, tarmacadam bubbles, masonry condenses and vaporises. That kind of thing. About as heavy as electro-acoustic improvisation gets these days. Warm and cold fronts collide. Or occlude. Whatever, once you sit this on your turntable’s platter you’re in for stormy weather.

The flip side, Greyscale is described as “…more laptop oriented”, and this is the performance from Orena, and is apparently only the second time Ielasi and Jaeger performed together. Here are sounds derived from rotation, possibly. Curiously, of the two, this one sounds more “live” to me despite the stated presence of laptops. New and devastating uses of DSP processing and mid-air refuelling. Satellites communicate; distant choirs transmitting from the 11th Century. Ruined abbeys protected by glass boxes – if you want to have a nosy around, its ten pound a punter into the pocket of the National Trust. Sounds grabbed from synthesisers combined with close-mic’ed table object manipulation. As regards an uninformed guess as to possible techniques employed, a lot of rubbing of the microphones themselves perhaps? A radio telescope being demolished slowly in remote woodland. Nature pushes back. Creepers creep, a briar curls over an abandoned stone cottage. If you sit in your car and fall asleep every time you visit a place of interest, it is no wonder your local knowledge is so poor. Just tell me which lay-by you’re going to be in and I’ll come and pick you up. They’ve mic’ed up a snake’s nervous system. Whoa. Back in the room. You’ve probably guessed that this is far more ambient to my ears than the Paris side. And all the better for it.