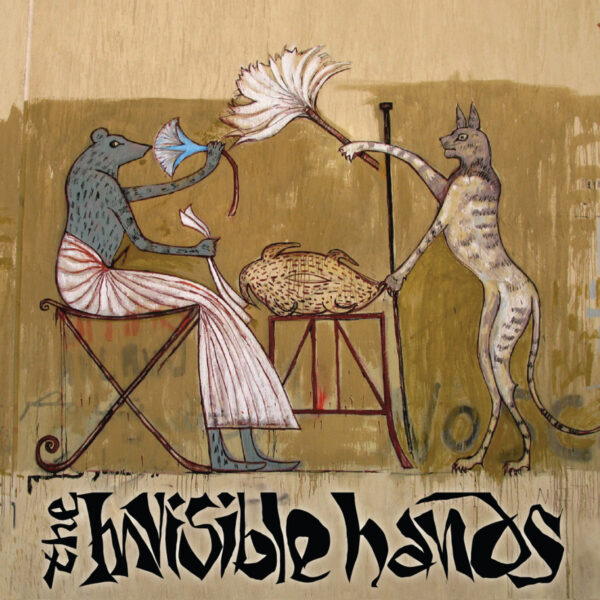 The Invisible Hands (ABDUCTION ABDT050) made a fine self-titled album of songs from Alan Bishop of Sun City Girls; he goes under his Alvarius B. alias for this Egyptian project, which took about two years to complete and features various sidemen from Cairo, where it was recorded. Bishop wrote and sings all songs and plays most of the instruments (guitars, keyboards, percussion) backed by Cherif El Masri, Magued Nagasti, Aya Hemeda and Sam Shalabi. Bishop is also responsible for the no-nonsense production of the album – mostly acoustic, dry and crisp sound, no frills, no pedal effects. This spare framework gives us a bare stage, the better to showcase the bang-on precision of the players, and also to bring home the full impact of his songs’ content. When Alvarius B. recorded with Cerberus Shoal in 2002, no maiden’s blush was spared as he dredged up gory, nightmarish images from the deepest buckets of his Id. Well, not especially wackoid surreal lyrics on this occasion, but as ever the content is tinged with dark horrors flapping at the edges like vile bats on periphery of vision. It’s hard to pinpoint any specific nastiness in the words, yet by the end of three minutes you’re walking away unnerved and jumpy. His “patented sinister style” is most evident in the singing; at best, he sounds impatient and twitchy, as if spoiling for a fight. At worst, ready to flare up into unexpected violence at the drop of a flick-knife. His lips curl sardonically around each tune and supply this undercurrent of menace, even when the melody and chords can be quite sweet; the song ‘Dream Machine’ might as well be sung by the dark brother of Frank Sinatra crooning an inverted Perry Como song in a Hellish cocktail bar dive. The clean production puts all of this implied malevolence in clear focus, and leaves the listener very little room to hide; you feel like Alvarius B. has his beady eye fixed on you throughout. All sung in English here, though apparently there’s also a version of the entire release with all the lyrics sung in Arabic, exclusively available to the Middle East market. Sumptuous cover art from the graffiti of Alaa Awad. From 11 March 2013. 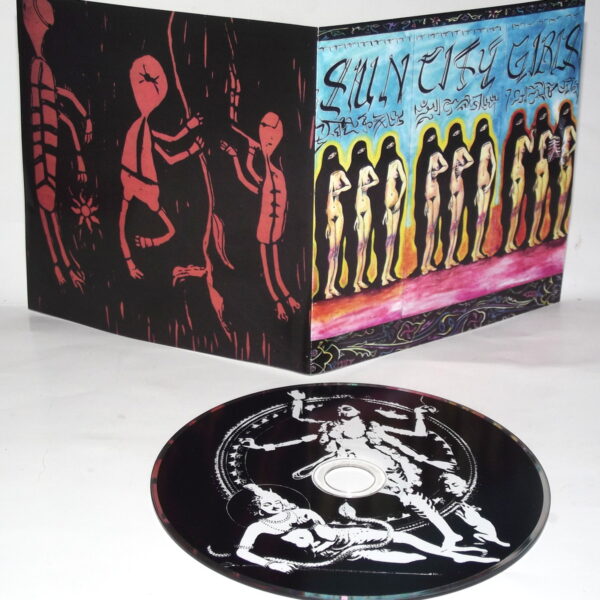 In same package we received a Sun City Girls compilation called Eye Mohini (ABDUCTION RECORDS ABDT049), volume three in a series which rounds up assorted seven-inches and rarities by this unique and unclassifiable band. Recorded between 1986 and 1993, here are 14 glimpses into an overheated hashish world of scaryifing Eastern unfamiliarity. Most of these were originally released on their own Majora Records label, around the time of the amazing Torch of the Mystics and Dawn of the Devi LPs, and represent a time when the band were playing around with “Arabic guitar instrumentals” and “pseudo-Asian vocal folk styles”; 1993’s ‘Kickin’ The Dragon’ is one such, a rendition so accurate that you’d easily mistake it as a refugee from one of their Sublime Frequencies compilations. As such, the comp is mostly acoustic rather than “rock music”, although a few tracks such as ‘It’s Ours’ or the long live track ‘Soar / The Flower’ will satisfy your thirst for the crazed and unpredictable “Death to Jerry Garcia” styled guitar jamming this trio could execute while spinning sideways on their whirling Sufi asses 1. Like the Alan Bishop record above, it’s also got its vaguely threatening undercurrents (I always feel if I fail to listen to their music “correctly”, then I’ll invoke the wrath of Kali upon my head), but it also possesses a lot of the Sun City Girls’ dark humour and sense of the absurd, an aspect which I think they always undertook with perfect seriousness; they played their pranks for keeps. I wasn’t even aware of this reissue project (the other two volumes came out in 2008 and 2009) but then I never had any realistic hopes of being a “completist” when it comes to hoovering up every last scree of this band’s considerable output. Given rarity and high prices of original Majoras these days, this CD is most welcome.