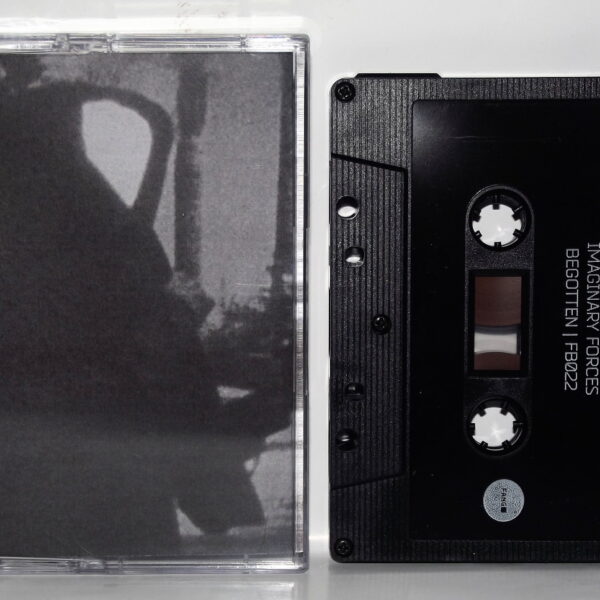 From 12 March 2013, fabulous cassette in a mostly black package from the swell Fang Bomb label of Goteborg. As you may know Fang Bomb is a personal favourite of mine for some reason. Maybe we share the same sense of the macabre. If they were a printing or engraving workshop, they would etch their lines deep and use a black ink of the deepest hue, resulting in evil tomes which, when opened, would give the reader forbidden glimpses of an ashen world and induce nuclear-holocaust strength headaches. Imaginary Forces is the London composer Anthoney J. Hart, who comes to us from a background shaped by 1990s drum and bass music, and whose Begotten (FB022) is a very rich piece of complex dark ambient music, with multiple layers – “environmental field recordings, the chug of train on rail, percussive chatters, insect song and whipping wind” all fed into its creation, selon thequietus.com. The fact that he was approached by Anthony Di Franco for a collaboration may also help you to situate his work. That and the fact that Begotten is based on his own personal obsession with a movie of the same name. I expect he’s referring to the 1990 experimental horror film made by E. Elias Merhige, which looks like it could be a mind-searing experience. Ironically, Hart spent a lot of money getting hold of a copy of this deleted item, but for the non-squeamish among you it can be viewed on YouTube now. The music of Imaginary Forces is compelling, not quite as “bleak” as much emptied-out dronery I’ve heard in this area, where the creators insist that we accept and participate in their sense of futility, and endure the aural equivalent of sub-zero temperatures that numb the brain. By contrast, Begotten gives us a lot to listen to and in its subtle layering often appears to be spinning in four directions at once, its elements shimmering and shuffling apart like decrepit tree limbs slowly withering away before our eyes. Yet it also retains an insistent and mesmerising power. Hart seems to have found a way to suffuse and disguise his pulsations so that they have the same impact as an entire week spent in a club with high-volume dance music, yet remain almost imperceptible in the mix.

Here’s CD 2 of the mammoth P16.D4 box set Passagen (MONOTYPE RECORDS mono58) which we broached some weeks ago. For Distruct, the trio of Ralf Wehowsky, Roger Schönauer and Ewald Weber were joined by Stefan Schmidt, Gerd Neumann, Thomas Memmler and Peter Lambert, for these 1982-1984 recordings which were released by Selektion on LP in 1985. RLW had been given the idea – by Harry C. Poole of Smegma – to do a remote collaboration; Poole proposed to send across tapes from America for P16.D4 to complete, without having to meet up. Apparently the American found the idea of a thousand-mile distance extremely appealing. This kind of thing is fairly commonplace nowadays, especially since file-sharing has been made easier by the internet, but I suppose it was an innovative and bold step in the early 1980s. Although Smegma don’t actually appear on the finished item, RLW went ahead with the idea anyway, and with his characteristic productiveness organised collaborations with numerous international names from the “noise” and “industrial” music areas. Consequently, you can hear contributions from Bladder Flask, DDAA, De Fabriek, The Haters, Merzbow, Nocturnal Emissions, Achim Wollschied and Nurse With Wound, plus many others. Even an anonymous submission was used for this ambitious postal project; on ‘Aufmarsch, Heimlich’ you can hear a choir from a tape sent to the band from somewhere in Eastern Europe. Said tape has of course been severely mangled by RLW’s unusual treatments and deep slices as he wields the scissors of truth. Impossible to summarise the intense and wild music on this release – every track seems to exhibit a different approach or inhabit a new sound-world – but one thing they all have in common is that they produce very disjointed, broken and difficult listens. The rubble and bracken of unpleasant noise is jumbled and rehacked every which way, resulting in an extremely uncomfortable ride. Truly radical deconstruction techniques at work here. While admirable and important, it’s not much fun to listen to with its general air of nihilism and misery, although I found some respite from the grimness on ‘Les Honteuses Alliances’, whose success might be attributable to the fact that it’s a multiple collaboration: Merzbow, Bladder Flask, Nocturnal Emissions and Phil Johnson all supplied elements to the work, although once again it’s mostly Wehowsky putting the materials into the frame. A very clever and elaborate frame it is too, one made of robust wooden struts and held together with dovetail joints and screws. The CD release includes a couple of related bonus tracks, which have only been available previously as part of a subscription-only Vinyl On Demand box set.