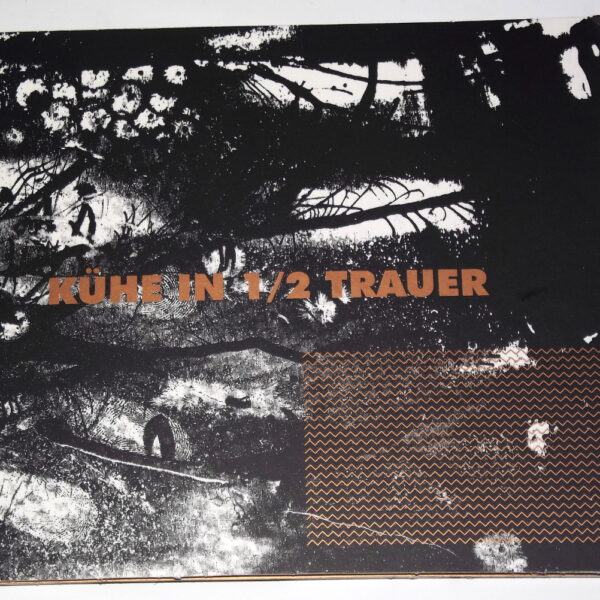 We’ve got this six-CD set Passagen (MONOTYPE RECORDS mono58) which is a “career-spanning” box of the undefinable work of the German combo P16.D4. It’s been lurking in the cannisters for many a month, but today I’m just going to try and look at the first CD. It’s called Kühe in 1/2 Trauer and was (sort of) the first proper LP put out by the team of Ralf Wehowsky, Roger Schönauer and Ewald Weber. This album wasn’t released until 1984, but the band was started in 1980 and had been steadily recording all that time. Even then Ralf (or RLW) was terrifyingly prolific, as his solo career will demonstrate. In fact this album contains a jumble of live and studio recordings mostly made between 1982 and 1983, and often we’ll find two recordings from different dates or actions, spliced together to make an unholy lump of gnarled noise. Before the release of Kühe in 1/2 Trauer the band put out various single tracks as contributions to cassette compilations. Did I mention the band were originally called P.D.? Their Inweglos LP from 1980 under that name is a real gem. I haven’t got an original LP of course but the later CD reissue on Absurd Records. Real tasty minimal electronic rhythms and analogue blattery. I seem to recall it as somewhat more tuneful than the hateful, depressing noise I am enduring today. Which isn’t to say I’m not enjoying it or appreciating it. This music is staggeringly original and innovative, and while it’s possible to locate it in a chain of circumstance that links it to “industrial” music, P16.D4 indulged in none of the empty cliches associated with the genre, worked incredibly hard, and seem to have been aiming at a form of sound art that was much more profound, varied, subversive, and potentially dangerous.

You can be impressed just by reading the printed credits for each track, which indicate their radical approach to making music: lots of improvisation, lots of live electronics, extensive use of tape loops, some conventional instrumentation, and much that isn’t – like the milk churn on ‘Paris, Morgue’ or the use of baking tray and washing machine elsewhere. Even when guitars, drums or keyboards are used, they’re played very weirdly. It’s not even made clear who was doing what; the main credit is “Concept”, which I assume means that one of the three devised the framework in which the noise would operate itself, and while RLW gets the lion’s share of these credits, a lot of the cuts are evenly divided among the team and (without reading the history in the booklet) I have no doubt that the group operated in a very democratic or libertarian manner. None of this prepares you for the insane and troubling sounds that reach your ears, composed with scant regard for conventional logic and following an exciting, absurdist path, especially in the matter of tape edits and juxtapositions of recordings. Take a simple three-minute song like ‘Rückplötzlich (Scheitze)’ – it clashes a group improvisation played with organ, drums and guitar with some unsettling tapes of screams, voices, laughing and radio noise; in less than three minutes presenting an unhinged and distorted view of society’s follies that George Grosz would’ve applauded mightily. The musical instruments are played with a ferocious amateurish attack, making a nonsense of “musicianship”, yet producing the correct degree of angry, hideous malevolence and seething discontent. At this juncture it’s hard to escape making comparisons between P16.D4 and This Heat, but P16.D4 seemed to have gone even further; it’s as though the whole band were at the level of Gareth Williams, the musically-untrained trickster in the This Heat pack. P16.D4 may also share some of Charles Hayward’s troubling ideas about the impossibility of communication; at one point in his life, Hayward despaired of human beings ever communicating anything, and it informed just about every song he wrote for that band. P16.D4 seem to take this state of affairs as a given, and are constantly striving to find expression in the most desolate and God-forsaken zones possible. They speak in desperate, blocked growls and fowl buzzing tones, defying anyone to make their way past this palpable membrane of alienation. Powerful!

Another abiding impression I have from today’s spin is one of broken-ness, a deliberate attempt to realise a broken and fragmented music; the music itself is shapeless, abrasive and lumpy. That milk churn image just won’t go away for me; the music itself might as well have been made by a churning process, and that’s reflected in the semi-mechanical churn of the sound. And it usually produces a sour coagulated whey, music that is virtually indigestible by the human system. Tracks are contrived to begin and end in the middle of nowhere, resisting conventional form, often breaking off just at the point where you think you might want to hear more of it. It’s hard to fathom the sensations of “beautiful ugliness” which this music induces. We’re left stranded in a world governed by absurd and incomprehensible rules; not much fun to listen to the unholy noise they make, but it’s even worse when it stops. “Funny, the more you eat the worse it gets,” said Estragon in Waiting for Godot. “With me it’s the opposite…I get used to the muck as I go along,” replied Vladimir in Beckett’s play.

Besides the entire Kühe in 1/2 Trauer album, this CD also contains the three Masse Mensch tracks from 1982; these were released on a Selektion LP of this title that year. I think it was the first vinyl release on this label, which Ralf operated with Achim Wollscheid. These items are no less chilling than the preceding work, but they also have a starkness in their realisation, often comprising not much more than a ghastly bass guitar riff with a layer of angst-ridden guitar noise growling on top. On one track, tapes of crowds shouting are manipulated to nightmarish proportions. On another, a saxophone and piano are added to the minimal set-up, but no sense of joy is imparted by this quasi-jazz instrumentation, and a very forlorn conversation ensues. The sound of the saxophone alone – a ghostly inhuman and echoing wail – will induce an instant melancholy, which can only be cured by the suicide’s noose. Most grotesque of all is the five-minute ‘Halbmensch’ where the treated voice stutters, moans and wails over a fragmented backdrop of tapes produced from kitchen utensils, along with the desultory minimal bass-guitar murmurations. The voice is struggling to make itself understood through a mouthful of dough. This stunning aural portrait of a “half man” is for me a particular highlight of the set, a penetrating observation on the human condition that imparts many uncomfortable truths.

I’m looking forward to digging into the other five CDs, and reading more from the booklet with its history, photographs and critical essays; a fitting showcase for this massively significant band.