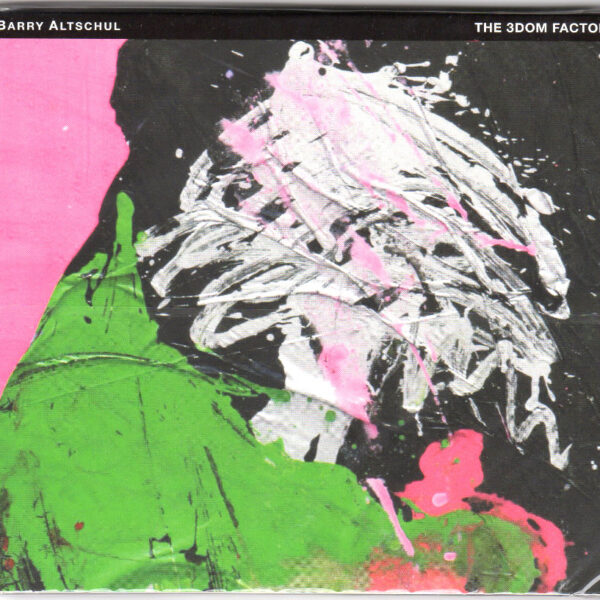 Joe Fonda’s jaunty and melodically irrepressible tenor saxophone slices into the woody thicket of the rhythm section in this excellent free-jazz album from drummer Barry Altschul; also joined here by bassist Jon Irabagon. The sleeve notes profess a commitment to making the listener “at the very least” feel good; in this they entirely succeed. The close communion of the ensemble playing suggests a band entirely at ease with each other’s playing. This isn’t to say that the 3dom Factor is in any way a cosy listen, the artists clash heads as much as they smooth sonic paths for one another; witness the way the gasping spluttering sax of ‘Martin’s Stew’ yanks the band down a path not immediately obvious from Irabagon’s patiently reiterating bass riff, or the drums skewing the groove on ‘Papa’s Funkish Dance’. The 3dom Factor is a wide-minded stroll around free-jazz and contemporary improv.

Cog-like process-music, a central rhythmic spine is examined, twisted, atomised, and quite often discarded entirely. Jean-Luc Fafchamps’ Back To…, here performed by Stephane Ginsburgh, consists of three individual piano pieces that can be combined in multiple configurations. While not attempting all of the suggested orderings, this writer found the standard 123 sequence particularly entertaining; the first piece’s frequent diversions into key-smashing tantrums acting as an effective starter for some of the lighter and winding Reichian passages occurring later. Encompassing a wide range of tones and pressures, this absorbing album holds the attention throughout; rapid minimalist passages abut stormy atonal cloudbursts; near silence introduces sections of intricate ringing beauty; the dense fusion of styles is never over-cooked. Back To… deserves your repeated and close attention; it is a twisting kaleidoscope of an album, shards of noise and melody clashing in complex and fascinating fashion.

Two Angles of a Triangle by Reto Mäder alias RM74 is a study in sonic alchemy; the melding of dissonance and concord, noise and stillness, the electronic and acoustic, causticity and sweetness. Comprising tape loops, atonal scraping, echoing prepared piano, gusts of drone, kalimba, and ringing distressed glass, among many other components, this rusting hulk of an album is one to sink yourself in. It finds beauty even in its darker moments; the strummed dusty strings on ‘Spineless’, for instance, contrast wonderfully with the moss-soaked decrepitude of its rotting background ambience. The whole album is also surprisingly song-like given the method in which it’s constructed; loose rhythms and almost folkish melodies present themselves at odd moments, catching the listener unguarded, squinting into the fog of chaos, unexpectedly glimpsing grace amidst the clamour. A subtle and confusingly pretty record, soaked in a wilted sadness and knitted from strands of junk and found-sound.