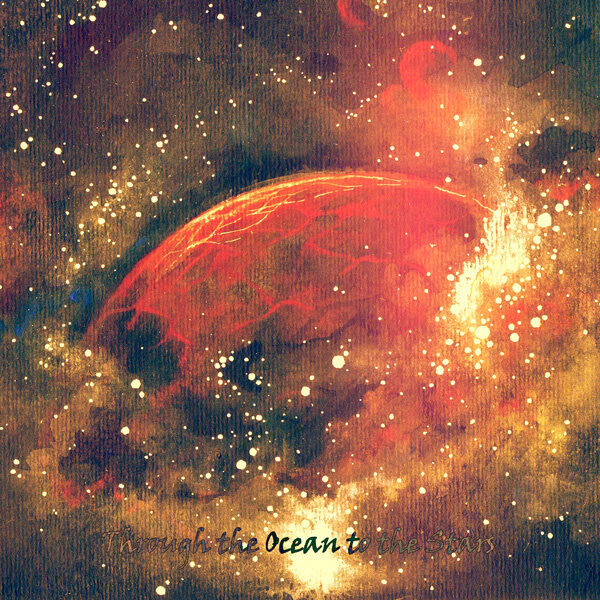 Lustre may be familiar to quite a few TSP readers with his dark ambient / black metal instrumental soundscape work – he has released a number of EPs, split recordings and albums – but Elderwind is a fairly unknown Russian entry into the world of BM.

Lustre leads the way with the two parts to “Follow Us to the Stars” – these are completely synth-dominated instrumental pieces of long droning sounds based around sparse minimalist rhythm loops and best heard together as one track – which in a way they are. Right from the start the music settles into two opposing camps of repeating swooping drones and pointillist tones, over which effects such as a pounding background beat or atmospheric wash might add some texture or depth. The second part is as repetitive as the first but in a darker vein.

The whole thing sounds mournful though possibly this wasn’t the intention. I find no sense of wonder or anticipation of the glories of the cosmos and the chance to be at one with the universe and to know something of its purpose (and by implication, the purpose of humanity and our individual purpose). Both parts are flat in sound and feeling, and with repetition being the only way these tracks escalate tension and feeling, the music becomes a tedious affair. The droning lacks subtlety and is very heavy-handed in comparison with the rest of the delicate music.

Elderwind grabs just over half the split release’s playing time with four separate tracks. The difference between Elderwind’s side and Lustre’s tracks is immediate: the Elderwind tracks are highly atmospheric and seem more attuned to the concept of the split recording, with a sense of awe at humanity’s contact with the infinite. The tracks naturally roll from one into another which enables the momentum and the ambience (and the soothing feelings they generate) to pass smoothly into succeeding tracks without the disruption of abrupt changing repetition loops. The final track “Polaris” suggests some kind of unity or communion is reached with the combination of spiritual organ-like tones, background wave sounds and strange whistle effects that seem to encourage listeners to reach out and contact denizens of the farthest galaxies.

It’s clear to me which side is the winner by a long distance: Elderwind hands out a punishing lesson to Lustre on how to create atmospheric space mood music that respects the concept and implications involved in voyaging to the stars. Both acts proceed from a depressive / atmospheric black metal background which comes with a baggage of existential contemplation of the human condition. Listeners might assume (mistakenly perhaps) that with such a background, these bands investigating space travel would bring along a curiosity about how such travel could reflect something to us about our purpose and place in the universe.

I don’t mean to question or criticise Lustre’s sincerity or motivation but his pieces are clunky and amateurish against those of Elderwind. In all probability these fall far short of his ambitions. This split recording could have been something great, a classic of its kind in spacey black metal psychedelia. As it stands, it’s uneven and awkward.

At this point I should mention that Elderwind, according to his entry on Encyclopedia Metallum, formed in 2009 and spent a few years exploring and perfecting his sound before releasing his first recording in 2012. The careful and studious preparation is evident in the quality of the work presented on this split release.