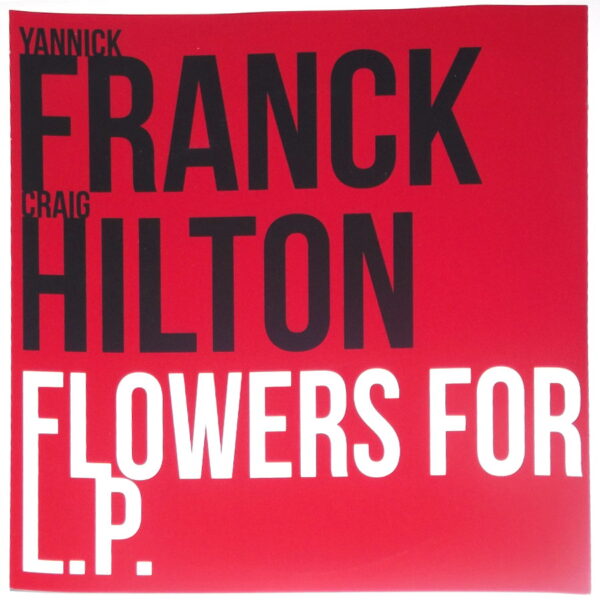 Last heard from Yannick Franck in 2012 with his Memorabilia album, now here he is teaming up with the American sound artist Craig Hilton to produce Flowers for L.P. (IDIOSYNCRATICS idcd009), a truly centre-less piece of hollowed-out drone, one where the excavation is so entire that it leaves a near-vacuum of non-sound for the listener to float like an agonised goldfish. The creators intend this chilling ambi-desolation as a tribute to an obscure French poet named Jacques Rigaut, a tragic suicide who was pegged by history as one of the Dadaists, but was so disaffected by the absurdity of everything that he never really completed his work, and left behind a few unfinished novels before shooting himself in the head. The richly-layered yet vague drones attempt to invoke Rigaut’s “dark, surreal, fantastic journeys”, acting in sympathy with his troubled soul.

Another glorpoid monster of improvised electronic murkiness with twisted dark funkoid beats from PAS Musique in Brooklyn. Abandoned Bird Egg (ALREALON MUSIQUE ALRN035) contains many surrealist-kosmische excursions by Robert L. Pepper and his crew – Michael Durek, Amber Brien, and Jon Worthley. I often visualise their collective musical outpouring as gobbets of coloured oil paint smeared thickly on the surface of a plaster wall, and their recording sessions are an attempt to capture the fascinating ways in which those paints mingle and swirl as they course downwards. If they left it too late, we’d be witnessing nothing more than a puddle of brown sludge lapping around our ankles, but their timing is usually dead-on. No vocals, apart from a few mysterious voice samples gabbling unconnected statements; otherwise very enjoyable instrumentals replete with drone, bizarre noises, extreme treatments and modifications, all heaped up in generous fashion. Natch, the finished product is somewhat uneven – not every track can be claimed a sparkling success, and some listeners may struggle with the overall “formless” approach of PAS Musique construction, but that philosophy of open-endedness is probably how they get the job done in the first place. Pepper also did the artworks; a bit like Karel Appel coming under the influence of John Dee and inscribing mystical sigils on the ground. From 24 June 2013.

Giöbia are a four-piece of Italian players from Milan producing the retro-flavoured late 1960s rock music that finds its natural home at Sulatron Records on their debut full-length album Introducing Night Sound (STI302-CD). I’m personally very partial to all the psychedelic revivalist types that swarm like mosquitoes to this label, and I do like Giöbia’s very saturated sound – scads of vintage organs and synths have their keys pressed relentlessly, and the unusual strings played by Stefano Bazu Basurto include bouzouki and electric sitar strummed to death alongside his electric guitar excesses. And the recording quality has that rich, deep sound that’s so redolent of 1969, bad acid and the imminent demise of Hendrix. I’m not as keen on the bored-sounding vocals, which I appreciate have been deliberately mixed in the background “to produce a more far-out atmosphere”, but they end up sounding just like Sundial or Spacemen 3 records. They include cover versions of songs by The Electric Prunes and Santana, but this is just further evidence of their confused identity. There’s also something off-putting about the rhythm section, which too often is heavy-handed and lumbering in the drumming, or reaching for a slightly trickier rhythm which they can’t pull off as a band. These obstacles prevent us diving headlong into the truly immersive and trippy sensations the band so earnestly wish to share. Even the gratuitous umlaut in the name feels wrong; isn’t that more of a heavy metal thing? From 6th June 2013.

YOL is a performance artist based in Hull. He kindly sent us a copy of his mini-CDR Neck Vs. Throat Volume 2 (FENCING FLATWORM RECORDINGS) where he does his shouty-gibberish thing with the help of Miguel Perez, an aggressive guitarist from Mexico who is credited with “string damage” and “guitar neck”. They never met for this recording; Perez sends his sound files to the UK digitally over the internet, and YOL just performs instantly as soon as he hits playback, “improvising over them on the first listen”. Results are certainly exciting, even slightly alarming, heady stuff; the sheer nervous energy generated by their twin manic scrabblings can be electrifying, even where you can’t understand the barked and yawped lyrics. Well, I think there may be some free-association Dada-like absurdist word streams buried somewhere here in the general hue and cry; check out the short booklet for some printed examples of YOL’s own unique approach to “words in freedom”. These texts do more than hint at urban squalor and shabbiness, and present a vision of the world from a gutter’s eye view. YOL describes the release as “an attempt to explore inside/outside noise”, whatever that means. I prefer the more user-friendly description “some sort of idiot noise busking”. As to that, I think if I met a busker like this in the London underground, I’d love to leave a £20 note in his cap, but I’d also be afraid to go anywhere near him; I have a vision of a hairy wildman cavorting about, his unwashed stringy hair flying madly 1 as he psyches his way into a groove. I realise this sort of thing is marginal as heck, but to me it’s lovely stuff. Limited to 50 copies, from 12 July 2013.