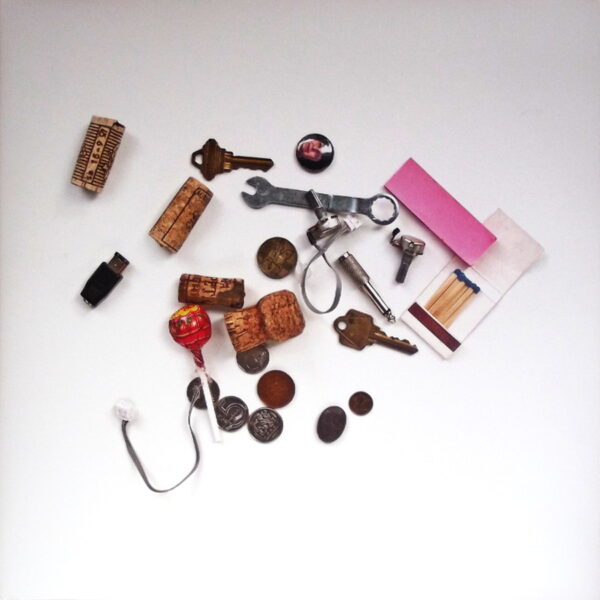 Alessandro Bosetti has scaled new heights of achievement with his Renard project, a fine art commission which has also found expression as an LP record (FRAC FRANCHE-COMTÉ FRACFC 002). He’s continuing to work in the “area between spoken language and music”, and while there is a fair amount of spoken word on this immaculately scored piece of chamber music, it’s actually more complicated than that…after one listen I’m as exhausted as I might be after hearing a 5 LP box set, since the work is so dense and compacted. If Bosetti was a film-maker, he’d combine all the best elements of 1960s Jean-Luc Godard and 1980s Peter Greenaway. Godard for the words (and inter-textual games), Greenaway for the precision of composition.

The idea for Renard derives from an ethnographic film seen by Bosetti. An African woman divines the future by casting objects on a table and reading them, learning hidden truths from their configuration; it’s not unlike the I Ching with its casting of coins or sticks 1. Bosetti devised his own updated version of same with help of Annette Stahmer, and assembled his own set of objects (perhaps similar to the array seen on the front cover), then experimented making a few castings with invited participants. They brought their questions to the table; they were instructed how to read to interpret the objects. Fruitful and emotional exchanges resulted 2; apparently, all of this was the basis for how Bosetti composed Renard. I’d like to think he found a way to recast the raw material of human speech into notated form (as Harry Partch did, on occasion), but it’s probably even more complicated than that…at least the clarinet parts, brilliantly played by Laurent Bruttin from Lausanne, seem to match the patterns of excitable human speech during some passages.

Though the album opens with something resembling a melancholic ballad or chanson (all the words are in French, by the way) and closes with a perplexing conversation between two disembodied voices, the most part of Renard is this fascinating and detailed chamber music, performed by Bruttin’s clarinets, the classical guitar of Seth Josel – a much-in-demand New York player who lives in Berlin – and Bosetti’s speaking voice, sometimes underpinned by his unobtrusive electronic device, an oscillator which murmurs up and down the scale to punctuate certain phrases. The clarity of the recording enables these ultra-precise pieces to shine like cut diamonds. Sonically, we’re invited to find affinities with the chamber music of Anton Webern, and the 1960s jazz music of Jimmy Giuffre, at a time when Jim Hall was the guitarist in his Trio. It’s not only highly distilled – I’d imagine hours of work from the “divining table” sessions were required just to generate two minutes of music – but also thoroughly composed and notated, so that every micro-second of this elaborate music could be replayed as needed. I like the way it’s described in the press notes as “hand made hyper-realism”…suggesting that Bosetti is making “life size casts” in sound. Of course, it moves past at such a brisk pace that it’s hard for the non-French listener to keep up, but fortunately the entire “libretto”, if we can call it that, is printed in the gatefold cover.

Speaking of the cover image, when I first saw it I thought it represented a parlour memory game which I used to play in my youth. You’d arrange some two dozen objects on a tray, let the guests view it for two minutes, then take it out of sight and remove one object. The point of the game was to identify the missing object. I often feel that Bosetti’s work is governed by game-play rules of some sort, but they’re much more challenging, and he plays for keeps. It remains to mention the title. It refers to another form of African divination, that of the Dogon people. They would trace secret diagrams in the sand, then read the tracks of the white fox the next morning. At the same time, it’s not hard to see Bosetti himself as a Reynard the Fox figure, sly and cunning as his namesake from European folklore. 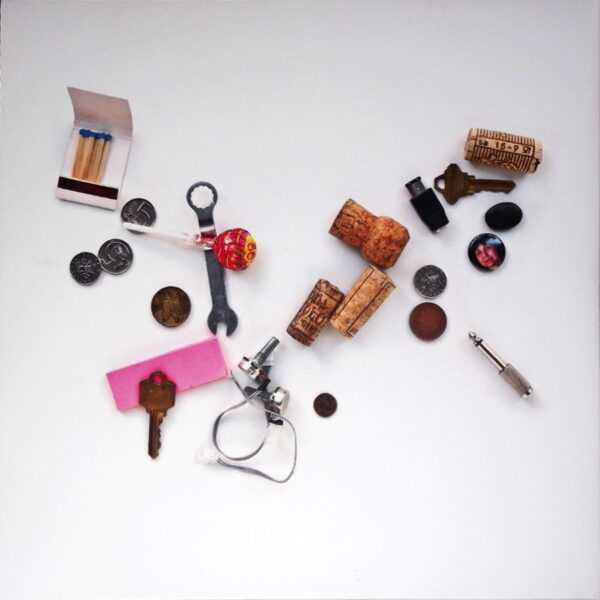