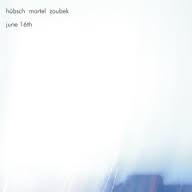 This CD documents the meeting of Carl Ludwig Hübsch (Tuba, Objects), Pierre-Yves Martel (Viola da Gamba, Objects) and Philip Zoubek (Piano). This international trio takes us through the gamut of extended techniques and preparations performed on their respective instruments to the extreme that they no longer sound like any recognisable instruments. Things rattle, buzz, hum and there are scrapes galore. I can imagine a range of motors and battery-driven objects doing the shimmy shake on the viola da gamba and the piano. But then there are moments when gentle sounds are coaxed out of the instruments with precision and control. Each of the five tracks are discrete works in and of themselves, and do not sound like extracts from an evening’s improv session. While I assume everything was improvised there are moments when it sounds very predetermined – such is the skill of these performers in not only listening to each other but to the sounds emanating from the trio as an unified entity. A very fine album indeed. This CD is comprised of a single forty-seven minute long piece. A sample taken from an old jazz record is split into three loops, and processed until it’s a single tone. So don’t expect any jazz-like sounds or remnants thereof. Each loop is repeated over and over, and gently glides onto the next loop with the aid of delay effects. The sounds are pure waves and tones, but it’s rather full-sounding and at the right volume will fill your listening environment. Pure ambient music in a reductionist vein. Works well as chill out music, or as a sound track for your day to day activities. Or you can sit with headphones on, tune in, and get lost. No new ground is broken here, but it’s a nicely executed example of generative music.