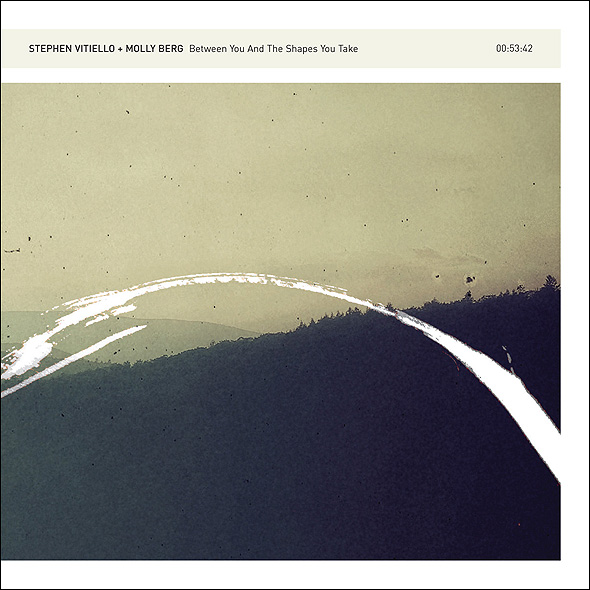 Reflective, guitar-rooted atmospherics with an evident indifference towards definite statements, like a long stretch of fence wire singing sadly in the open country wind. The title and music suggest a threshold where form surrenders to a tentative state of being, while unnameable somethings fleet past in the hazy traces of dawn light.

Following on from the pair’s 2009 recording, The Gorilla Variations, Between You And The Shapes You Take was improvised in seemingly quiet surroundings by Vitiello (guitar and processing) and Berg (clarinet and vocals) – largely without prior discussion (the two have enough of a collaborative history to have a strong intuitive rapport) – then whittled and tweaked into these ten charming, melancholy miniatures. Along with maudlin mountain winds, twangs and picks, one catches snatches of radio noise, lilting sighs, organ, flutes and grainy oscillations, all of which elements are largely stripped of their defining features to conform with the music’s hazy wholeness. Instrumental contributions are delicate and minimal, occasionally punctuating the haze like small rocks jutting from the stream’s surface. It’s sometimes remote, sometimes warm in a Fennesz-y way, but ever shy of direct physical manifestation.

While each track offers sufficient variation from that previous, listeners who favour ‘event’ coverage are not advised to partake: your heavy hands will be thwarted by its illusiveness. Nor should it be played specifically for relaxation purposes, for Eno it ain’t. These pieces describe a dreamy netherworld lit by errant sparks from unearthed appliances and loosely defined by the stupor of forgotten selves ambling through the obtrusive undergrowth of one’s mental antipodes.

Just shy of seventy minutes, these two hefty servings of smouldering tension from oceanic jazz trio Zoor simmer as softly as The Necks being kettled by Her Majesty’s finest, their low register guitar and sax drifting back and forth in a foamy wash of cymbals, the trio patiently developing and manipulating a mildly threatening attitude over the course of each 30-odd minute piece. Unlike The Necks however, there’s little in the way of melody or trajectory, and for all their hubble, bubble and toil, there’s not an awful lot of trouble resulting from these extended expressions, even though every second is loaded with potential energy: Bertrand Denzler’s sax broods in measured exhalations with soft, palpable power, and guitarist Jean-Sébastien Mariage’s soft, barbed wire shredding reminds us that it’s the quiet ones you have to watch out for, but its Antonin Gerbal’s tidal drumming that seem to be the magmatic driving force, tempered albeit by a modest lack of ostentation. While this album may not be the one to kick-start your party, it could well be the boon you’re after at the end of a tiring day.

Two sizeable servings of slimmed-down ambient inaction: this spotless, white vinyl 12” – the extended parts one and two of an inaugural 3-track digital release for Swedish label, l’amour – consists of a freely-associative mural of woozy gestures more commonly found in the opening and closing of more expansive dance recordings. And what an appropriate opening statement it is: its propositional club space a womblike world of nascent audio experiences: slow and soft metallic grinds that fall in and out of sync; distant, muted thuds heard through a fleshy membrane in a semi-conscious haze before a 6AM stroll home in youthful sunlight. Assembled by Viktor Zeidner: one busy individual spreading himself thin as DJ, VJ, remixer, festival organiser and digital project manager, these two pieces are minimal in the extreme, and while not quite novel, do provide a genuinely soothing listening experience.