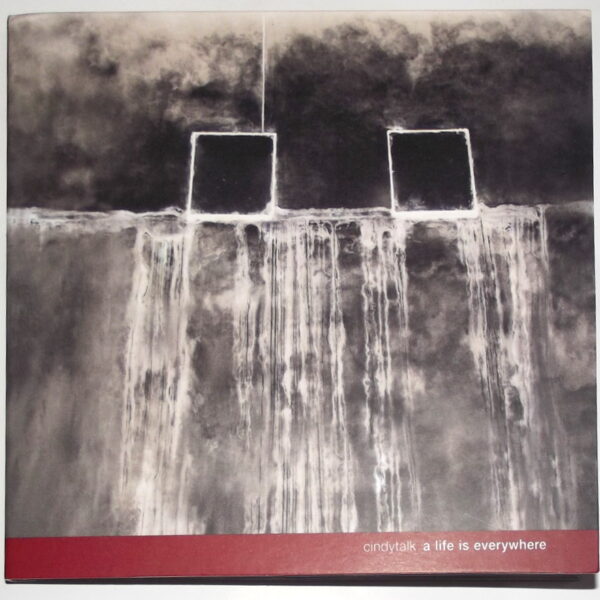 The musical path of Gordon Sharp (now, for all intents and purposes Cindytalk…) winds a considerable way back along the time coast. I half expected to find an entry for him in George & DeFoe’s ‘International Discography of the New Wave’ sourcebook. And sure enough, his first (?) band The Freeze with the “Psychodalek Nightmares” seven inch is within the pages of this mighty tome. You’ll notice I used the word “path” with reference to G.S., as “career” almost suggests an unbroken tick list of achievements. For me, he seems to flit wilfully in and out our our consciousness and is as slippery and elusive as Harry Houdini employing a Romulan cloaking device. Well, in the last couple of years, Sharp/Cindytalk has decided to remain within our spatial co-ordinates and Editions Mego has been his latest stopping-off point.

A Life Everywhere l.p./c.d. is his fourth for the label and is an arresting melange of audio snapshots of fairly indeterminate origin, where the processing element (post production) is pretty much king. Though the approach here seems to veer towards the more organic/naturalistic school (see Annea Lockwood or Stylus), instead of the cartoonized/rapid-fire juxtapositions beloved of many. “Time to Fall” and “To a Dying Star” are immediate attention grabbers, both sharing common ground by using what appears to be the sound of the incoming tide on a shingle beach. Both pieces could easily serve as perfect backdrops for M. R. James’ “O Whistle and I’ll Come to you my Lad”. In particular, the scene involving Professor Parkins’ first encounter with unknown forces on that deserted shoreline. This has to be the Jonathan Miller adaptation – accept no imitation! 1

“My Drift is a Ghost” is I guess, the most rhythmic and appears to extract/magnify all of the traffic slipstream synthesized by Kraftwerk on Autobahn. Then there’s “Interruptum”, which merges the sombre largos of Tangerine Dream’s Zeit with certain facets of Graham Bowers’ outlandish symphonics. Looking at my initial jottings/scrawl regarding the closing “On a Pure Plane”, I seem to to have written that “the contents of a massive aviary have become hysterical with the introduction of several birds of prey…” and, playing this screechy and claustrophobic beast just one more time, I see no reason to apply the Tippex…stet. Being unfamiliar with Sharp in this incarnation, I fully expected an exercise in cumulo-nimboid ambience. The jade in me thought of that as a soft option for those with a ‘history’. However, this weird tableau that unravelled before me relays a story of an artist who is clearly pursuing his own visions with precious little interference from the world outside his window.