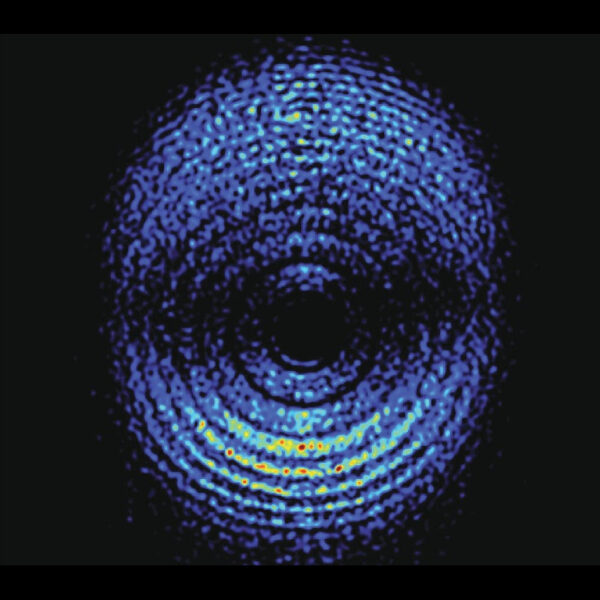 A compact history lesson with regard to the potential of analogue synthesisers, primarily the Buchla Series 500 but also the EMS VCS3 “Putney” synthesiser (the keyboard-less synth Brian Eno famously used with Roxy Music), here and there combined with vocals or acoustic instruments.

The first track, “Rouge Permanent” combines a poem written by Hal Clark and read (possibly compiled from multiple takes) by his Norwegian friend’s five year-old with material generated on a Buchla 502 specifically – “In the mid 1970s, Don Buchla began experimenting with digital designs and computer controlled systems. The results were the 500 series and the 300 series, both of which paired the new technology with existing 200 series modules to create hybrid analog/digital systems”, according to Wikipedia. Interesting side note: Buchla built the mixer for Ken Kesey’s Merry Prankster bus which now resides (the mixer, not the bus) at Calgary’s keyboard museum Cantos. “Rouge Permanent” has some nice chiming cadences after the recitation of the poem. Then there is discordant melodic information as the notes gradually pitch-slip to a quieter passage, leading on to “random” note clusters which reminded me of the more sinister electronic backdrops in the film Logan’s Run. Diminishes gently to end.

On “The Breath, Nerve And The Pulse Of Life”, with piano, drums and bass almost like a futuristic jazz quartet, Clark’s work falls somewhere between The BBC Radiophonic Workshop and Bud Powell, perhaps? The Finnerud Trio were Hal Clark plus Svein Finnerud on piano, Bjonar Andresen on bass and Espen Ruud on drums. These were musicians who certainly did not baulk at the idea of improvising jazz with a man wielding an analogue synth; one of these strange new machines, some the size of a wardrobe, which is surprising even in the groovy post-Bitches Brew jazz world of 1974. In fact they had been refining their integration of modern with traditional instrumentation for the five previous years since 1969. This piece is the kind of thing the modern proponents of the free-playing plus electronics styles such as Temperatures or Bolide aspire to. Although perhaps with less wild abandon than the modern clique of groups enjoy. Little does the Finnerrud Trio realise they truly are part of the vanguard of experimental jazz – something that continues to challenge and obsess the more receptive musicians now, forty years later. Tuned toms and plenty of electronic drone. Then out of nowhere something like a precursor of Ambient Techno. If I had been played this recording “blindfold” with no previous sight of the cd sleeve, I would have assumed it was a recent recording.

Track three, “Lament”, is a literal reading of its title that I found quite hard to listen to all the way through the first time. I’m not quite sure why yet. One might think that we would all be bored of the synthesiser by now but thanks to the recent resurgence of interest in in the possibilities afforded by these machines (Daniel Lopatin, Jason Kahn, Keith Fullerton Whitman) we also have access to a global reissue trend of electronic composers and can rediscover pioneers and renegades (as Ian Helliwell would have it in his pieces for The Wire last year). On “Lament”, Clark accompanies his own voice with the Buchla digital studio at NSEM. Norsk Studio for Elektronisk Musikk (NSEM) was founded in 1975 by Hal Clark and the composer Arne Nordheim at the Henie-Onstad Art Centre in Høvikodden, while it was run together with the Music Academy, Norwegian Broadcasting Bureau (NRK), and Composers Union. Interesting his use of new terms to describe his working on this technology – he triggers “composed instrument muddles” apparently, via both sequences and by using a keyboard. “Lament” is an intimate blend of voice and Buchla Series 500. Mournful. Use of discordant melody again. High pitched sine tones placed against the plaintive quality of Clark’s voice. I imagine this was a very personal piece for Hal Clark.

Originally intended for quadraphonic playback, final piece “The Monkey And The Organ Grinder” finds Clark performing with a touch sensitive keyboard and joysticks to control 360 degree panning. Quadraphonic sound never really caught on, and it is only in recent years that hardware alternatives to piano keyboards such as touch pads, ribbon and matrix controllers and so forth, have become really popular with electronic musicians. “The Monkey And The Organ Grinder” is of interest today mainly due to its method of creation by these unusual and ground-breaking, means. As such, it seems a little superfluous tacked-on as it is at the end of this compilation. I suspect to Clark, it may have been merely a short experiment.

Analogue synths have a purity of sound, in other words, one of their technical advantages in the recording studio is that they can be recorded directly and quickly without the necessity for microphones and their attendant quirks. There is a contemporary resurgence of interest in these machines, perhaps as a reaction to the ease of music production with modern software. Analogue synthesisers are not easily tamed; they are unstable, complicated, unpredictable and fragile. But perhaps these are all attributes as well as drawbacks. I expect we’ll be seeing a lot more re-releases of historic synthesiser recordings, and a lot more modern day practitioners.