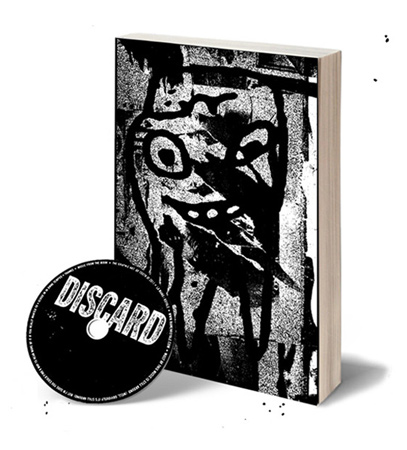 I basketed this compendium of delirious drawings and sounds in the blink of an eye upon learning of its continued availability, having missed the earlier Kickstarter campaign. Delighted am I at lacking the willpower to resist the first available product from the Steel Pole Bath Tub/Milk Cult camp in many years, via mainstay Dale Flattum. Fortunate are we all in fact that copies remain available at a knockdown price from Flattum’s Ramen Royal website. This perfect-bound volume contains 256 pages of eye-catching black and white graphics, and sleeves a companion CD of contemporaneous music. For those unfamiliar, Steel Pole Bath Tub were a prankish noise rock trio who blipped on the peripheries of radars at some point during the 90s Grunge explosion, but vanished soon into the new millennium owing to logistical problems it seems, among which: clearance issues for their many vintage TV samples, and label scepticism towards their product; one label guy notoriously branding their final album (as it came to be) ‘unlistenable’: a title they proudly adopted, as it happens.

While I’ll always have time for Steelpole’s shark-skinned, deconstructionist rock-outs, the offshoot, Milk Cult (featuring the same members, but exhibiting a more deranged, plunderphonic bent) were a firm favourite of mine, a group guised to the point of intriguing anonymity long after Mr Bungle had dropped the wacky masks. Though it’s been many years since they were in action, they left behind an enigmatic trail: five albums of megaton-energy collision, molten vinyl pools and a taste for mountainous riffage that gradually subsided into an appetite for pop’s potency; a serendipitous eclecticism that seemed ever on the verge of expressing something just beyond their collective reach. Their debut, Love God – soundtrack to a film of the same name – which is represented by the eponymous track on the accompanying CD, was long a personal favourite, though I was disappointed to find upon finding said film at YouTube that the soundtrack had been forgone for a rather generic selection of speed metal tracks. The film itself, a tacky, straight-to-3am-television movie about mental patients being shipped out of the funny farm to low-cost urban accommodation, is well-complimented by the final choice I suppose, but would have been better subverted by the more unhinged option. Still, the ten minutes of relentless trash-core that constitute this track make this product a worthy purchase.

Also featured are cuts from Dale’s other projects, including MC offshoots CC Nova and Novex; The Nein, and of course, SPBT. They amount to – if not quite a ‘best of’ – a strong cross section of Flattum’s musical activities. Included as a deal-breaker is the previously unreleased second set by pop collage project Novex: a day-glo, samplephonic act I first found via Aquarius records, but which sadly vanished during a house move or somewhen. As a follow up to ‘Kleptophonica’ it’s far from predictable: quite a cadaverous creature in fact: seven sun-starved song sketches, shelved perhaps due to the exigencies of family life.

Flattum continues to design to this day, and his bedroom creativity is well conveyed in his phone directory assembly of chance encounter illustrations. Art-wise – just like those Milk Cult covers – it betrays a nostalgic fascination with 1950s style advertising and its air of sublime corruption, which to my eyes makes Dale a peer of those esteemed collagists Winston Smith and Frank Kozik (indeed, the Steelpole guys did time in the Alternative Tentacles camp, and for whom they were clearly model inmates). The bulk of the book collects Flattum’s many Xeroxed, zip-a-tone gig posters for once-alternative acts such as Shellac, Mastodon and Deerhoof, as well as stacks of work produced for posterity, to much of which he has added his own line of deceptively cutesy product-style illustrations. It would even appear that Flattum’s work maintains the ’90s fanzine aesthetic to the present day, much of which is as raw and beautifully ugly as ever.