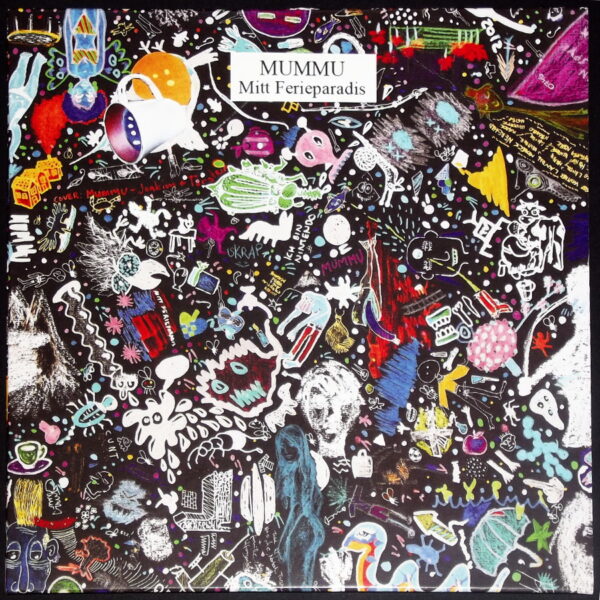 From Norway, we have a single by Mummu which is a team-up between Skrap and Ich Bin N!ntendo. Skrap are the two women Anja Lauvdal and Heiða Jóhannesdóttir Mobeck who make quite a nice low-frequency and subtle drone music out of tuba and synth, while the trio of Nergaard, Winther and Heibo are capable of puking out a form of spiky high-energy noise-rock with their guitar-bass-drum setup that is appropriate to almost any musical situation, as their recording with Mats Gustafsson will testify. Both bands also have at least one CD album to their name on this label. On Mitt Ferieparadis (VA FONGOOL VAFLPS001), we have an A side ‘Feda Bru’ which is incredibly restrained, and a much more fiery B side ‘Logatunellen’. You might be more drawn to the riotous and anarchic free playing on ‘Logatunellen’, which is louder, thicker, and almost has a beat that you could frisk to, but somehow the energy feels neutered, blocked. There’s a lot more to be said for ‘Feda Bru’, even though it appears hesitant and uncertain at first spin. I would guess that Lauvdal and Mobeck are quietly dominating this session, while the three rockin’ guys are reining themselves in and acting on their best behaviour. It sometimes takes more discipline to play with this degree of restraint than it does to blast out an amplified blurt, and this does show up on the recording in the form of a seething tension that’s so sharp you could put it in a jamjar. The cover art was concocted by all five musicians with the help of Torstein L. Larsen; it looks like a primary school art mural, except it’s spiked with four-letter words, riddles, and slightly rude sexual images poking about in amongst all the incoherent dribbly visual anarchy. No idea when we got this one but it was released in 2013.

White Star Line (FARPOINT RECORDINGS fp042) – the label and artist would prefer it printed as White * Line – is a piece of sound art by the Irish electro-acoustic artist Danny McCarthy from Cork. He’s attempting to make some sort of statement about RMS Titanic and the White Star Line shipping company; since Cobh in Cork was the final port of call of the doomed ship, it has historical significance. McCarthy visited the harbour there and made some field recordings using hyrdophones (underwater microphones) from the very same pier trodden by the feet of passengers who originally made their way on board, before sailing off to meet their doom. If the cover photograph has any verisimilitude, said pier is now just a skeleton of decaying timbers. It doesn’t actually take a great deal of research to find this information out, and there’s a “historic experience” museum at Cobh which was established in January 2012 and is probably proving very popular as a school outing. McCarthy’s approach is to combine his watery field recordings with low-key electronic sounds, and I think there may be some post-processing on the finished work. What results is to my ears some rather dull process sound, a lot of static and whirr combined with little bubbles, and ultimately rather irritating sonically. However, there’s an added poignancy to the fact that he made the recordings on a date that coincides exactly with the centenary of the tragic event. And the cover images are strangely moving; the lone pigeon sitting there on the ruin of the pier in a rather forlorn stance is quite touching. And at least one listener claims to hear the voices of drowned souls in this record, or at least an imaginative suggestion of same. However, compared to Gavin Bryars’ grand-scale work The Sinking of the Titanic, this under-resourced and attenuated statement is not much more than a footnote. Arrived 3rd June 2013.

I always enjoy the playful singles released by Jos Moers on his Belgian-Dutch Meeuw Muzak label. The one by Harry Merry, Australian Sun (MEEUW MUZAK 042), is no exception – and like others in the roster, it’s melodic, has a catchy beat, and is eccentric to the point of near-daftness. Merry was born in Rotterdam and professes his love of vinyl singles, attracted as much to the sensuous colours of the labels as he was to the music he heard when he was a child growing up in the 1970s. He’s a keyboard player and pianist, and while he usually plays a Roland synth, this particular record is instead accompanied by a Belgian barrel organ. There’s a small colour photo of this beast in the press release, and it’s a shame we couldn’t get a picture on the record sleeve. In design terms, it’s a truly ghastly piece of Mittel-European gingerbread. How was the jaunty, cornball music that emanates from its pipes put into service of this quirky piece of post-punk music, with its cryptical layered lyric about the threats to global ecology, and the stiffly mannered but irresistible singing voice of Harry Merry? The answer is, I think, that the music – originally composed by Harry Merry and Ilhem Sabih – had to be rendered into “book music”, a late Victorian storage system for mechanical organs, which comprises holes punched into thick pieces of card. The pieces of card are folded into a zig-zag book, and fed into the mechanical organ. Elbert Pluer assisted with the production of the “orgelboek”, while Adrie Vergeer provided the instrument, Tom Meijer did the arrangement, and Martin Luiten did the mix. The B side contains a delightful instrumental version, allowing you to hear the sheer craft that has gone into the production of the mechanical music. You can keep your Conlon Nancarrow…it’s about time for a revival of this near-obsolete music production method! The A side is a stroke of sheer genius. If nothing else, the fusion of the lyric’s cadences with the music is little short of incredible; the ungainly phrasing of the musical composition dovetails with the words in ways that are continually surprising, like a little miniature wooden cabinet with ingeniously hinged flaps and drawers. A meeting of the old and the new, the square and the hip. A brilliant piece of offbeat pop, and a tiny miracle enacted in just over three minutes. From 21 November 2012.