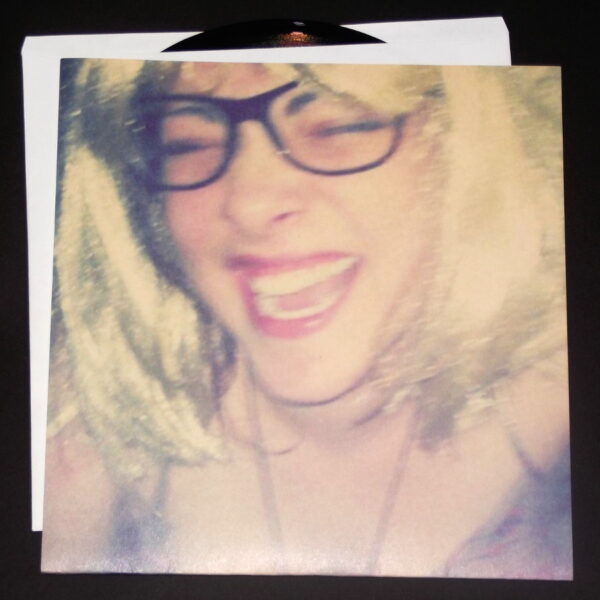 Last heard from Trophy Wife with their eponymous EP from 2011…here they are now with Stella, My Star (PRIVATE LEISURE INDUSTRIES PLI-5), two songs which show this Tennessee all-girl band now reduced from a quartet to a trio and continuing their themes of haunted suburban angst which they deliver with lo-fi post-punkish guitars and synths and wispy washed-out vocals. Have to admit this is an improvement on the earlier EP which didn’t know where to put itself and wound up like a fakeified Goth-lite mish-mash of ideas, despite some spiky highlights in the playing. Here, the title track is a jumble of words which are hard to decipher, but it’s clear a sinister story is being unfurled and there’s no happy ending to it; matter of fact the song just stops dead abruptly with no formal warnings, leaving the listener a tad stunned. The disquieting tone of the instruments here, and the uncertain chord changes and key of the song, create the correct degree of unsettling paranoia. A dense and opaque nightmare in the daylight. B side ‘Frankie’s Song’ is certainly more limpid, and the dark nursery rhyme of the repeated lyric is incredibly basic, but the payoff to this “tale of childhood love gone wrong” feels as trite as a Hollywood teenage horror flick. I think this band have potential, but they gotta stop striking so many poses that don’t quite fit, and strive to be themselves a bit more. Arrived 10 April 2012.

Romvelope has a seven-incher Catomountain / Hodmandod (ADAADAT ADA0025). This is the electro-acoustic sound-artist Bjorn Hatleskog, a man with feet planted in both Norway and Scotland, who performs with handmade sound sculptures in what could be deemed a rather eccentric performance setup. He’s built an electric organ that can be played with a remote control, a guitar that strums itself, and an item called the “robotic bongo” which I take to be his personal rustic update on the drum machine, and hopefully a convoluted device that is far more complex and time-consuming than some facile piece of programmable machinery. Hatleskog also generates his own unique form of live electronic sound by processing and amplifying the otherwise inaudible buzz from fluorescent lights. This might be akin to the methods employed by Atsuhiro Ito and his optron, but I’m prepared to be corrected on that. It’s probably no surprise to learn that he’s done it in art galleries around the UK and mainland Europe; this kind of thing just begs to be seen in a confined space. Reading about his quirkoid inventions makes them appear rather brilliant, but as sound art, this record is tame and unadventurous, a dreary series of random clops and buzzes; the endearing “clunky” feel to the recording is the only factor that appeals to me, as though Romvelope were presiding over a workshop of charming wooden toys that are gradually coming to life. However, neither Pierre Bastien nor Bruce Lacey will be losing any sleep. Limited to 200 copies, arrived 8th July 2013.

MHFS is one of two items we received from the fine Emerald Cocoon label on 30 January 2013. This is Mark Sadgrove, a New Zealander based on Tokyo who is also an atomic physicist. The Grey Lynn Homeless Set (EMERALD COCOON EC006) was originally delivered in response to a commission from the label, who asked Sadgrove to perform a support set for Metal Rouge’s debut live show in 2006. He was too busy working on his thesis on quantum mechanics to attend, and instead turned in the recordings on this seven-incher, requesting that they be played over the PA. Well, I spun this item at home and have at first been massively underwhelmed by MHFS’s baffling outburst of arbitrary, meaningless noises. Now as I wrote this I find I can’t wait to hear it again. It’s short to the point of abruptness, the sounds generated are lazy, dull, and broken, and all the mistakes in the process – Sadgrove uses an incredibly primitive setup which can barely be called “musical” in any sense of the term – are exposed for all to hear, and indeed incorporated into the finished work. Apparently it’s all very deliberate; his selection of recording locations that allow for maximum leakage of environmental sounds onto the tape, his detuned and de-assembled acoustic guitar that has been strung with six low E strings, and a system of recording that is programmed, perhaps using mathematical methods, to deliver the certainty of randomness to a high degree. The other appealing element is that none of the above is “explained” on the recordings, which simply burst on stage and make their brief statements underscoring the absurdity of existence, before vanishing into the nearest wormhole. The A side of this item will be more “shocking” to those who crave form or structure, while the B side may win you over with its bizarrely distant voice elements and its additional textures, which contrast quite sharply with the stark minimalism of the A side. Marginal in extremis, the ultra-simple approach of MHFS calls into question more elaborate forms of sound art, making them appear labour-intensive and wasteful by comparison. This is #4 in the label’s “Alone Together” series.