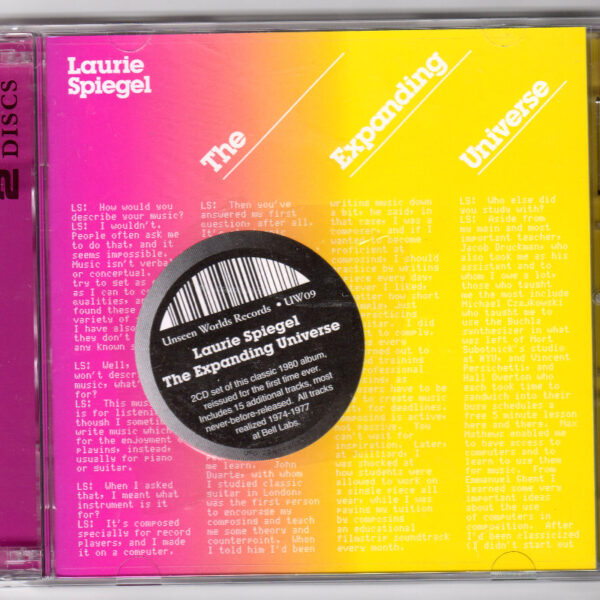 Due to the cost of development and difficulty using the first computers and synthesizers, the narrative surrounding the earliest computer music innovations appears relatively clear. Unlike the development of the Blues or Post-Punk, endless influences, complexities, lack of recordings and overlapping canons produced by anyone picking up a guitar, the development of audio synthesis technology is constricted by availability and condensed history. That narrative elaborates on a handful of technicians and programmers, committed musical amateurs alongside composers, experimenting with vast unwieldy equipment across international laboratories and research groups. The BBC Radiophonic Workshop, Electronic Music Studios, Cologne’s Studio for Electronic Music of the West German Radio, the Columbia-Princeton Electronic Music Centre, Institut de Recherche et Coordination Acoustique/Musique in Paris, The San Francisco Tape Music Centre, to name a handful, all working towards new means to produce and conceptualise sound. I have always found this narrative of obsessive scientists playing with ring modulators and basic coding, competing and collaborating on synthesizers and new systems particularly gratifying despite being an obvious oversimplification.

Laurie Spiegel is a composer, software designer, hardware engineer and programmer who has a prominent position within this narrative of innovation. Her previously out of print début, The Expanded Universe, is here reissued so definitively that it barely resembles the four pieces comprising the original. The extensive and insightful liner notes provide detailed production notes for each track and clearly align Spiegel within this perspective. Her contributions to early computer music and audio technology are well observed and as her reputation as a visual artist has grown so has awareness of her myriad innovations with analogue and digital synthesis.

The entirety of the pieces spread across two discs were composed at Bell Telephone Laboratories using Max Matthews’ Generating Real-time Operations On Voltage-controlled Equipment, or GROOVE, system. Matthews, on staff to test the quality of telephone dial tones, is possibly the most significant figure in the history of early computer music and discounting university departments or commercial studios, Bell Laboratories was certainly the period’s greatest private lab concerned with computer audio synthesis and audio research. As AT&T were the USA’s sole telephone provider they were under a great deal of pressure to encourage this type of high-level research and development. GROOVE’s combination of analogue and digital components is the major source of its innovation. Operating from 1968-79, it was a hybrid system with a rudimentary graphical interface. Whilst several similar hybrid projects existed or were in development, Musys at EMS, Xenakis with UPIC at CEMAMu slightly later or Donald Buchla’s work at Dartmouth College for instance, none had yet reached the scale and complexity of GROOVE.

A Honeywell DDP 228 microcomputer, costing the department $400,000 controlled a modular synthesizer. The complex patching possibilities of the modular unit was controlled by keyboard or algorithm input, realisable in real-time rather than the drawn out process usually necessary for computer composition. Such synthesizers were notoriously difficult to keep in tune and extremely responsive to changes in temperature and using the computer to initiate control values effected on the modular addressed this in some way. Twelve voltage controlled operators, seven voltage controlled amps and two voltage controlled filters; GROOVE could enact continuous changes to sound not conceptualised as notes or scales, potentially reproducing the complex sounds of bowed or wind instruments. It also stored musical data for later editing and operated as an extremely rudimentary graphical sequencer of the type that dominates electronic music production now. Each user would have their own unique configurations and could effect these immediately. In many ways the supremacy of MIDI and graphic sequencing in contemporary electronic music, although emerging from systems like GROOVE, makes this music seem much more alien and expressive.

Spiegel cited GROOVE as ‘the ultimate hybrid modular synthesizer’, embracing the limitations of composing for something so fragile and unstable that it would inevitably become redundant. The Honeywell was discontinued in 1978 meaning the end of the system as a cutting edge unit for composition. In 1991 a compilation of Spiegel’s work entitled Obsolete Systems was released. Playing with the image of these vast and ancient mythologised technologies, it provided an interesting counterpoint to Spiegel’s otherwise relentlessly progressive and innovative approaches, such as her work with ‘intelligent’ compositional tool Music Mouse. The music on The Expanding Universe was already ‘outdated’ by its release; a brief glimpse of an alternate form that could never reach fruition. The piercing sine waves, real-time alteration and graphical sequencing were by 1998 reproducible in extremely basic form on hand-held game consoles.

If this was the case, why does The Expanded Universe possess such a reputation or warrant returning to once more? As the product of experiments with a single piece of technology it establishes its own novelty as a metric for quality. But why should we canonise a work eclipsed by the rapid pace of innovation it contributed to? Spiegel followed GROOVE and left Bell Labs in 1979 whilst continuing to develop both hardware and software environments for composing with computers. Neither then nor now has she expressed an interest in nostalgia or deifying previous technology. Similarly, Emmanuel Ghent’s work with GROOVE is often perceived as being both more substantial and innovative than Spiegel’s, yet outside of dedicated discourses his name is unknown (interestingly he also served as Spiegel’s private musical tutor in the 1970s).

This reissue addresses these issues by framing those original four pieces not as a ‘lost’ anachronism, but as the culmination of an astonishing and vital process we can now access. The focus on this narrative of technical innovation, although satisfying, obscures Spiegel’s incorporation of her background performing on banjo and lute. The first pressing of The Expanded Universe was issued by PHILO records, a company established to distribute folk and traditional music. What distinguishes Spiegel’s work with GROOVE from someone like Ghent is that it does not feel out of place in that context. The surrounding material presented here confirms the unique balance and tension alluded to on the original; generating immediate and communicative ‘folk’ forms on a system that required moving between two rooms.

Clusters of notes pulse and swell, gradually modulating and phasing between one another as attack and decay are varied and clipped square waves are drawn out like meticulously organized finger picking. It remains striking that the composition reflects the idiosyncrasies of the system as drawn out by Spiegel. GROOVE processed only voltage data; Spiegel is disconnected from ideas of notation or divisions of improvisation and composition. The music is literally programmed and automated, making the arpeggios, harmonies, complexity of form and emotional affect even more beguiling. Adding to the sound palette are a handful of strange percussive experiments; bell tones forced into complex polyrythms imitating Sub-Saharan Africa’s traditions, as well as swelling drone pieces that connect with later Kosmische traditions.

Spiegel deviates from, but also enriches that narrative of early computer music. The expression of traditional modality within this idiosyncratic and irreplicable technology, as well as Spiegel’s incredible compositional clarity mark The Expanded Universe as a strange and brilliant anomaly. 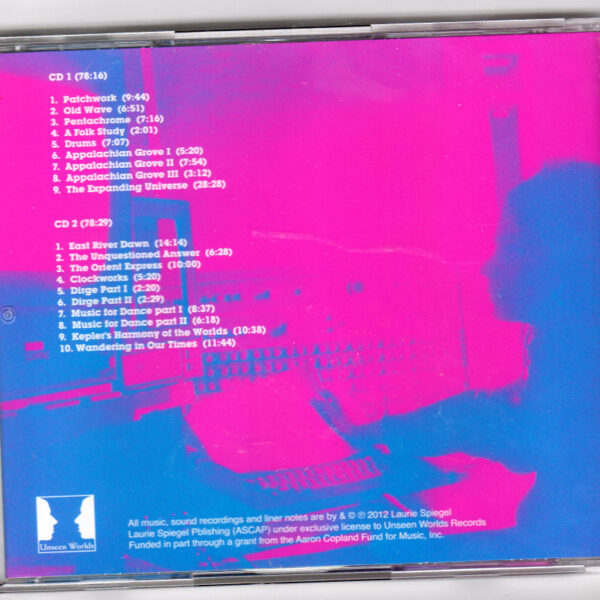