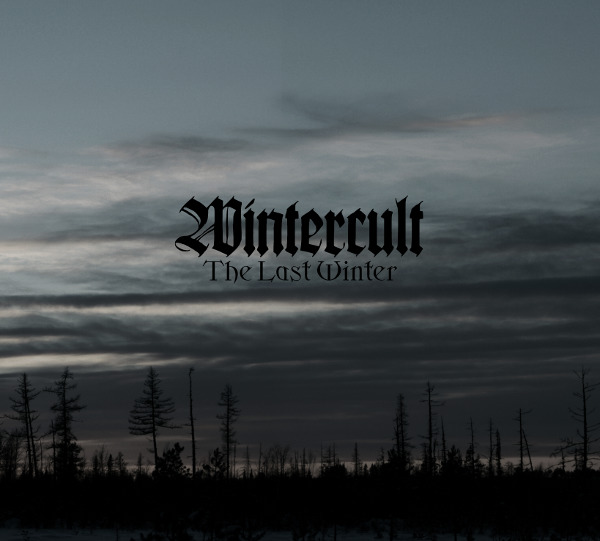 Let’s hope that in naming their second album “The Last Winter”, this Siberian duo were only thinking of the winter that’s been and gone (2013 – 2014) and not the winter to end all winters. Some titles on the album don’t seem too hopeful about that. The music has a definite air of finality: a scourging blizzard guitar drone, backed by doomy percussion and accompanied by distant howling phantom voices, forms the backbone of Wintercult’s style.

The title track sets the scene for what’s to follow: squalling noisy tremolo guitar, moderately powerful drumming that in speed varies between slow and medium-fast and which drives the music onwards, and those eerie muffled vocals fighting to be heard through the guitar texture layers. The music tends to emphasise melody, a relaxed pace and a fairly solemn mood. There’s the odd episode or two of relative calm where a clear-toned guitar melody may play over and over again. “Taedium Vitae” introduces a rhythm with death metal blast-beat influences but otherwise isn’t much different from the preceding song and could almost be a continuation of it.

“Eternal Solitude” has some distinctive riffing and a wavering rhythm in parts so it stands out above the rest of the music but not by much. The singing becomes more anguished and despairing than it does on most other tracks. Most songs on the album tend towards repetition and don’t generate much tension or passion. The insubstantial and generally monotonous vocals may have something to do with the lacklustre mood of most tracks. The effect is that no matter how much the instrumental parts in the songs vary in their details, the voices seem to be repeating themselves across each and every track as though one song is being played in different versions. There is not much atmosphere on the album either and the mood seems so blank as to be unnoticeable.

As the album plods on steadily, it seems to lose some traction after the halfway point and listeners’ attention can start wavering. “Anabiosis” is a very long piece for what it does, given that it springs nothing that’s not previously been heard.

Eventually when all is said and done, and the wraith voices fall silent, the air around you feels no different than before you started playing the album. The music may have been good in parts and there were some good melodies in quieter sections. But you never felt completely immersed in whatever world Wintercult was striving to reach: the music was too monotonous, the vocals too limited in range and atmosphere was lacking as well. The entire album really does sound like one song repeated over and over in different variations. I’m beginning to wish this album really had been the winter to end all winters.

In recent months, I’ve come across a real treasure trove of Russian black metal bands – most of them either one-person bedroom depressive BM projects or post-BM acts with eclectic influences from around the globe – on Youtube; many of these bands are from right across the country including places like Cheboksary (Ural region), Ekaterinburg (western Siberia) and even Nizhnevartovsk (Khanty-Mansi Autonomous Okrug). I don’t know much about Russia to be able to say what the abundance of such bands means – it could mean folks in some parts of the country really do feel bad about their circumstances or just that some young people have too much time on their hands during school and college breaks – and while the general standard ranges from abysmal to average and occasionally to astonishingly good, the popularity of the BM genre itself across the world’s largest country speaks well for its claim to be a global cultural presence.