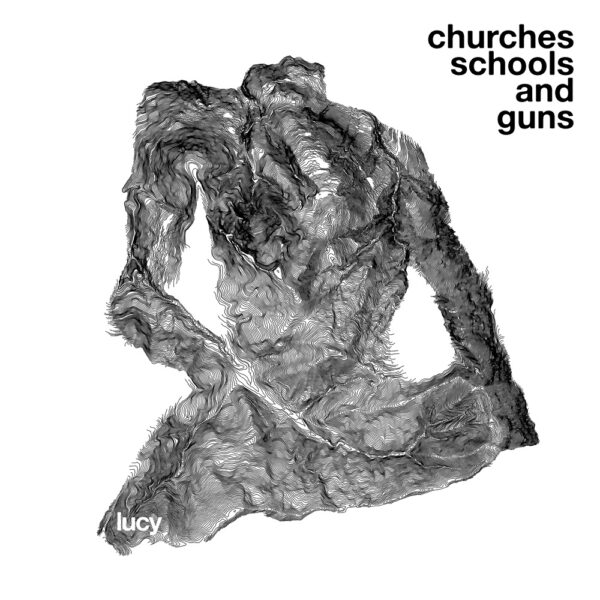 No, “Lucy” isn’t a woman in case you’re wondering: it’s a solo project by Berlin-based producer / DJ / sound designer Luca Mortellaro who also owns the label Stroboscopic Artefacts. “Churches Schools and Guns” is the quirky title of this offering of dark and slightly sinister minimal techno-dub whose central theme might be a futuristic survey of a dysfunctional society addicted to paranoid technological visions amplified and manipulated by media designed to mirror and reflect back to us our deepest phobias in order to keep us all afraid of one another and so prevent our revolt against the forces oppressing us. I confess that initially when I got this album, I thought it should have said “Churches Schools Post Offices and Guns” but that would have suggested a more particular vision peculiar to societies where “going postal” means something more than popping a letter or a parcel into the mail-box.

Though divided into 12 tracks, the music is best heard as a continuous soundtrack of deep space techno-ambient rhythms. Individual tracks, while they may contain some interesting sounds, rhythms and audio-textures, turn out to be very repetitive and (in the second half of the album) monotonous, unable to advance much further than the initial rhythm and beat loops. While early tracks set down definite atmosphere and mood of an ambiguous and slightly malevolent nature, delineating the start of a tour of the future global panopticon where consumers of manufactured experience huddle in their cells, afraid to look outside, the tracks in the later half of the album seem less confident and the early strong direction dissipates.

Some tracks are very distinctive by virtue of machine-like rhythms (“Laws and Habits” which might suggest that the regulations and conventions we have are our jailers), crisp crackly pulsation beats (“Follow the Leader” which also features a very creepy throat-singing sample loop) or a robot vocal (“Leave Us Alone”). “We Live as We Dream” seems a hopeful track though the title itself suggests a double-edge sword: our dreams are all that sustain us but they might well be more nightmare than dream.

Ultimately though this album promises a lot, it doesn’t quite reach its potential as a soundtrack to an imaginary dystopian techno-world. I’m hoping Lucy’s follow-up work will take up where this one leaves off as I think Lucy could work itself into a niche of very dark ambient minimalist techno soundscape art not reliant on dance beats and rhythms.