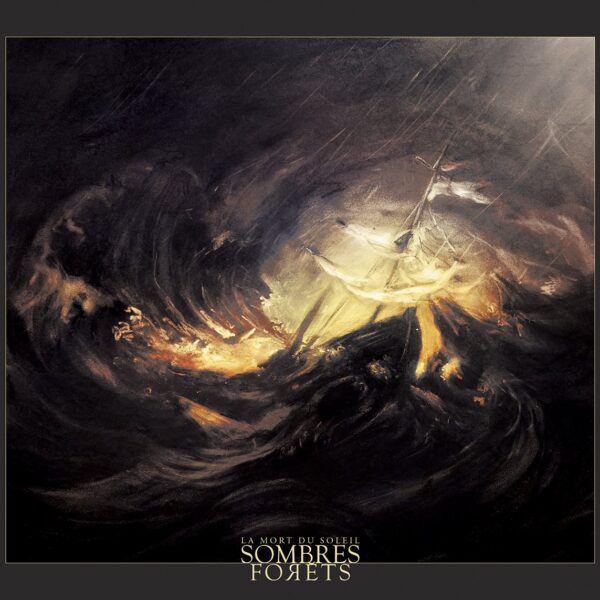 I reviewed the debut album “Quintessence” by Sombres Forêts for TSP several years ago and since then this Canadian act has had quite sparse output with follow-up albums released in 2008 and 2013. “La Mort du Soleil” seems an introspective, contemplative effort with a strong emphasis on atmosphere and intense emotion. Melody and riffs dictate the nature of the songs with less busyness and more space within. SF main-man Annatar allows the mood and subject matter of each song together to dictate its direction.

The music has a soft edge and a deep cavernous echo effect gives it a three-dimensional sculptural feel. Annatar’s singing is fairly dominant in the mix although his voice can be thin and a bit ragged. There may be post-BM influences in some of the music – certainly the BM tremolo guitars seem less constantly noisy though they are always present. Montreal’s famous children Godspeed You Black Emperor may be one source of inspiration. Sometimes the pace is relaxed, allowing for plenty of emotional drama to burst out. Lead guitar solo break-outs appear but don’t usually dominate the songs where they are present.

By themselves the songs are quite good but bunched together on the album they tend to sound very similar and could just about run straight from one into another; you would not notice much difference between one and the next. Riffs and melodrama are packed into each song densely and considerable anguish and agony are expressed as well. Over 52 minutes, so much unhappiness and personal torment delivered can either be exhausting or a complete turn-off depending on listeners’ mood. Very few songs let rip with explosions of BM anger and rage at an unforgiving and indifferent world that looks askance at individuals’ pain as they struggle through life. There is more melancholy and passive acceptance of dire fate it seems than there is of fury against so much unfairness. One stand-out is “L’Ether” which includes a thumping drum introduction, clear guitar melodies as well as tremolo BM-string texture streams and passages of acoustic guitar wistfulness. Other instruments prominent on the album include piano (especially on one of the middle tracks, “Au Flambeau”) and possibly violin and mandolin in some parts.

All tracks are long – quite a few go past the 9-minute mark – and arguably they could have been edited for length as within them there’s not that much escalation of emotion or other conflict that would result in a dramatic and memorable climax. The songs bang on the turmoil straight away and the emotion stays much the same from then on. Entire tracks are pretty much ongoing purges of sorrow and intense feeling.

For Sombres Forêts, this album builds upon previous work and extends the act’s range much farther into melodic post-BM territory. However many BM acts have progressed from depressive BM to depressive melodic post-BM rock in similar ways so this move for Sombres Forêts doesn’t come as a surprise. I think though if Annatar wants to stand out from the pack with Sombres Forêts and not give the appearance of following the herd, he must now consider sticking his neck out into musical territories far from BM.