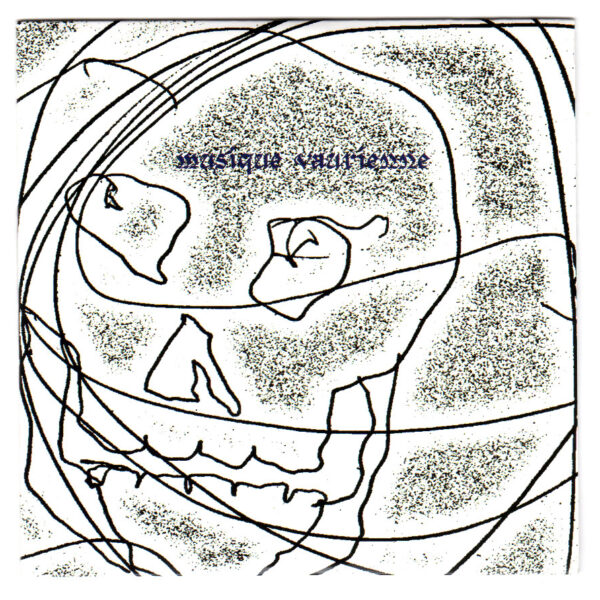 Bizarre skull-laden item from Romain Perrot, here performing under his Roro Perrot alias. This diminution of the Christian name is for me one of the more endearing traits of French culture; the way Henri becomes Riri, Estragon becomes Gogo, and so on. I think it’s the way a French mother shows affection for her children. As to that, you may think that only Romain Perrot’s mother could love a ramshackle album like Musique Vaurienne (DECIMATION SOCIALE), but you should bend an ear to this far-out item of disjunctive amateurish guitar noise and unearthly caterwauling and decide for yourself. An electric guitar is mangled and shredded, producing awful tuneless noises and formless shapes, with no attempt made by the player to disguise the clumsy, lumbering manner in which his paws clutch and tug at the metal strings and leaving all “mistakes” and duff notes as part of the finished work. Occasionally the guitar-playing is either fed through a clunky antique reverb unit, or else recorded as though Roro were playing in a deserted chicken coop at four AM – there’s that strange feeling of “distance” that recording engineers try their best to eliminate, and in places this is like hearing a live bootleg of The Magic Band recorded through an old sock. Then there’s the hideous singing, which lurches wildly from nauseating groans to primitive animalistic grunts and strange obsessive repetitions of dumb phrases, much like the mutterings of a raving loon. In all, this is an endearing and very human attempt to bring “rock music” right back to its radical beginnings – assuming those beginnings are aligned, not with Elvis Presley, but with the earliest days of Neanderthal Man. I realise that most listeners will lose patience in about five seconds with these broken non-musical outbursts, but Roro doesn’t care – the insouciance is shown not just in his music here, but also in the titles, which taken together in translation amount to “So what…fuck off…who gives a shit…nothing”. How much more Punk Rock do you want? It’s not the first time that Perrot has picked up a guitar, but this is a great example of his unique craft, simultaneously reinventing and parodying rock music on his own terms.

The album Love Song for Broken Buildings (QUIET WORLD FORTY THREE) in fact contains no songs, nor even any industrial-style noise sounds you might associate with wrecked buildings or demolition sites, but instead a suite of charming electronic instrumentals concocted by Kostoglotov, the alias of Daryl Worthington from London. Label boss Ian Holloway was impressed enough by Kostoglotov’s two previous releases to find a home for this one, and he praises the painterly qualities of the music (light and colour) while also situating it stylistically in a general Kosmische / Cluster / Sky Music milieu. It might be apt to imagine Kostoglotov wheeling his camera down a boulevard of derelict houses, and drinking in the visions of solitude and urban decay. There’s a human side to it also; certain tracks suggest that broken buildings are a sanctuary of sorts for him, a place he can retreat in search of solace or meditation, even inviting like-minded friends into the shared space. Personally I like the muscular qualities of the openers ‘Nervous Things’ and ‘Broken Buildings’, whose brevity (two minutes apiece) I would also commend; and the sub-bass throbs of ‘Cement’ have a brooding minimal inscrutability which I enjoy. But I’m afraid I found the rest of the work drifts off too easily into meandering, ambient drones, whose overall sound is just too familiar and user-friendly for my tastes, tuneful and pleasant though it be. From September 2013.

Another fine piece of retro-prog played in the 1970s style on The Papermoon Sessions (SULATRON RECORDS st1303-2), where the Copenhagen trio Papir jam it up with Electric Moon, the German duo of Komet Lulu and Sula Bassana. For this 2012 session they produced just three tracks, two of which are lengthy star-struck freakouts worthy of their Hawkind and Grateful Dead antecedents, and Mogens Deenfort (from Mantric Muse, Øresund Space Collective and The Univerzals) with his synthesizers has brought additional electronic freakery to the echo-drenched party. ‘Farewell Mr. Space Echo’ is sixteen minutes’ worth of hard proof that the Pink Floyd album Ummagumma continues to hold more sway than the Book Of Kells across certain strains of unreconstructed European hippiedom. ‘The Circle’ is even longer in duration, but less effective somehow; wallowing around in vaguely jazz-tinged soloing for its first half, then sinking slowly into a miasma of one-chord pounding thereafter. The sound is just a shade too cluttered, but I suppose that’s a danger when you bring two long-hair bangle-wearing bands together in the room. Even so, all of these Sulatron releases are recommended if you already have a huge collection of 1970s prog and krautrock, and want to hear it re-expressed even more emphatically than the original creators of the genre could manage.