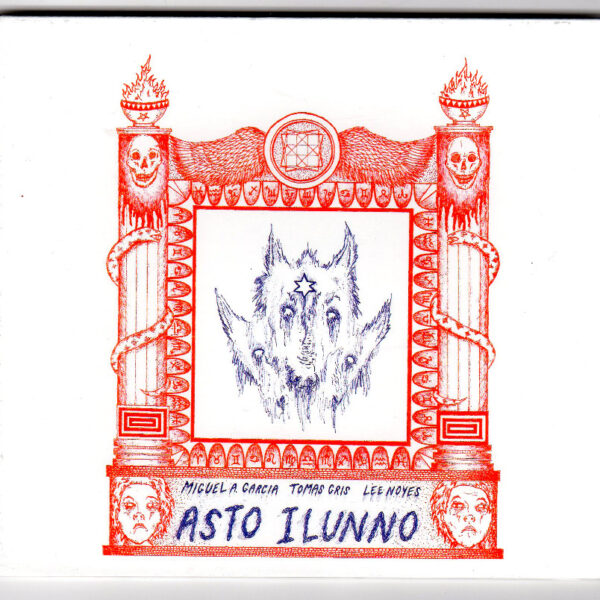 On Asto Ilunno (IDEALSTATE RECORDINGS ISR1-13) we’ve got a single piece of improvised sound art which lasts some thirty teeth-grinding minutes, delivered by the capable mitts and shovels and Miguel A García, Tomas Gris and Lee Noyes, the latter of whom released the item on his own idealstate recordings label in Goteborg. I’m always drawn to anything where my favourite abrasive Spaniard García is involved, but Noyes is a new name to me, so I looked up his dossier. This Canadian-born fellow has spent a chunk of time in New Zealand before moving his base of operations to Sweden, and he’s a firm believer in the collaborative and co-operative ideals of improvisation, priding himself on his listening and communication skills, while exploring the sound potential of percussion, feedback, and the piano, which is what he plays here. Asto Illuno is one of those exploratory improvisations that seems to take a long time to get started – there are some eight minutes of barely-audible fizz and rattle before the players feel comfortable enough to commit themselves to anything more than stalking around each other like lions in a cage – but thereafter it’s a topnotch example of hypnotic, distilled free noise operating in a carefully-controlled, almost rigid environment. García belches out polite chunks of crackle from his electronics set up, Gris performs peculiar and nameless actions on his table of objects, while Noyes punctuates the floating atmosphere with well-judged blocks of minimal chords struck from his dampened keyboard. Indeed it’s Noyes’ piano trills and stabs which stand out for me on this record, occupying their space in the ether with a clarity and starkness that’s akin to the voice of a tall Presbyterian preacher delivering a sermon from the pulpit in stern and clipped tones. I never thought I’d hear anyone defeat the mighty García in an improv standoff, but Noyes succeeds here in putting all that undisciplined scrabbling and doodling in its place with just a few seconds of his coldly ethical piano work, damping down the Spanish fire with his jets of ice water. In all, a near-ceremonial trance experience emanates from this steely and grim session, an impression which is bolstered by the bizarre shrine drawing on the front cover decorated with skulls, zombie heads, snakes, and quasi-Masonic symbols. This was provided by our good friend Nick Hoffman of Pilgrim Talk. A real grower…from 10 October 2013. 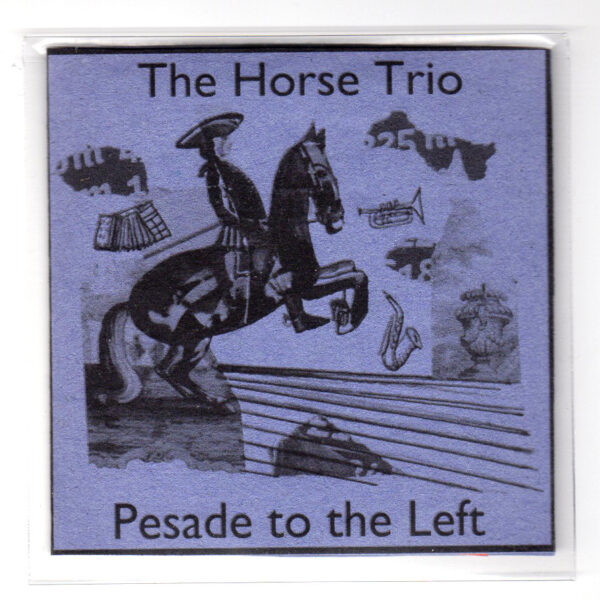 Linear Obsessional Recordings continues to produce CDRs of improv music produced in England which are quite often very extreme and testing in terms of their sound, and exist in very small editions with hand-made packaging. The three-track EP by The Horse Trio, Pesade to the Left (LOR039H), is in an edition of just 30 copies. Here the label boss Richard Sanderson plays his melodeon (a squeezebox related to the accordion family) with Hutch Demouilpied and Sue Lynch, for three decidedly modest workouts, all of them rather quiet and unobtrusive. I think I’m getting this impression mostly from the sound of this short album, which is very flat and dry, allowing for little in the way of natural resonance. Even the tiny photo of the trio inserted in my copy makes them appear somehow cramped, their music painted into a muffled corner, as though they were trying to defend the ideals of improvised music in a tiny school gym while the rest of the world has become one gigantic amphitheatre for manufactured pop bands. I assume this is a deliberate strategy and they’re aiming to present their work in as natural and untreated a light as possible, but it may be they’ve gone one step too far down the route of all-out honesty. However, the sustained tones of brass / woodwinds / melodeon do indeed work together in a most pleasing manner, guaranteeing a pleasant 20 minutes with no wild outbursts. One of the pieces, ‘Piaffe’, is their interpretation of a graphical score composed by Carl Bergstrom-Nielson, so presumably the other two are all-improvised. Trumpeter / flautist Hutch Demouilpied is a composer, songwriter, and sound artist from London, and a lot of her work has appeared as soundtracks for small independent films. Saxophonist Sue Lynch may be familiar to some as a member of The Remote Viewers with Adrian Northover, but she’s also worked a lot with Caroline Kraabel and has a pedigree in improv / free playing that goes back to 1983, when she was a member of the agitprop big band The Happy End, the jazz-song troupe who worked hard to oppose Thatcherism. The Horse Trio probably take their name from the Horse Music Improvised Club, which at time of writing meets up every month in a pub on Kennington Road in South London. There’s certainly nothing particularly “horsey” about their music, which is more like being transported on a slow canal barge to Richmond than riding a black stallion over Hampstead Heath. From 21 October 2013.