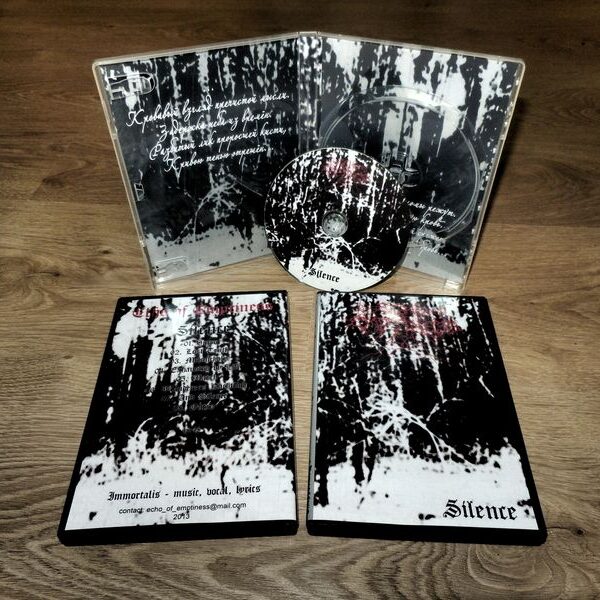 For an album titled “Silence”, this recording turns out to have plenty to say over some 49 minutes. This is atmospheric and creepy black metal from Russian duo Echo of Emptiness. It can be an ideal record to play late at night if you’re in the mood: it has a very dark and intimate feel and you can easily think yourself the only human existing on this tiny planet as you listen to this music of melancholy and loneliness. The band’s sound is distinctive: the guitars seem to have a very compressed shrill and steel tone almost reminiscent of very reedy woodwind instruments even when playing tremolo. The texture of the music is furry and crispy at the same time. The vocals are a mix of grim BM style and clean-toned and the members sing in English.

The album consists of seven tracks but the ones that will be of most interest are tracks 2 to 6 as these are a mix of black metal and ambient. The other tracks are purely ambient tone pieces: wintry, cold and minimal, with no more than a bass melody or ominous sub-bass drone being audible, they perhaps take up more space on the album than listeners might like but I suppose their length is in keeping with the album’s themes of hopelessness, depression and shuffling off the mortal coil.

While they have a good sound, the black metal tracks tend towards slow and plodding in pace. There’s not much energy in the songs and for a good part of the album they drift in the grey zone between comatose and barely sitting up. A big part of the problem is the limp drumming, thin and soft in sound and not featuring much variety in playing, let alone power and speed. The vocals carry all the emotion and anguish and veer dangerously close to melodramatic hysteria. Songs like “Melancholy” resemble mini-operas in the way the voices alternate between BM and clear, as though a conversation in a dark cave is in progress. The band’s potential is revealed on “Exhausted by Life” when at long last the music speeds up but even here this has the unfortunate effect of revealing how much EoE misses out on not having a strong, focused and driving rhythm section.

I realise the album aims to recreate the feeling of suicidal depression, the lack of energy and motivation that accompanies it, and the fragmentation of identity but EoE have a lot of work to do to convince us listeners that their work is worthy of our time. The guys have atmosphere down pat and a good sound, and they show ability in experimenting with sound and mood. They need to work on developing a more powerful sound with forceful percussion that pushes the rest of the music and inspires them to create and play urgent music with a large range of emotional expression.

I don’t get much sense of the angst and pain of living with depression, and the torment it causes to sufferers. That is something the album should have tried to capture.