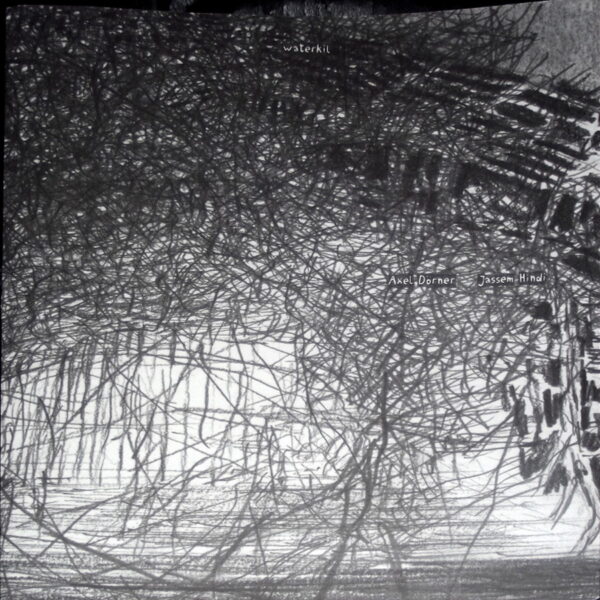 Another very good fine art record from the German Corvo Records label. Corvo may not flood the market with dozens of releases in the style of the all-conquering Editions Mego, but everything touched by the hands of Wendelin Büchler is always immaculately presented and a well-considered and curated item, so that the listener is guaranteed a condensed slice of high-octane art (both music and visuals) in the manner of a good slice of roast beef. In the case of waterkil (CORE 004), a record concocted by the duo of Axel Dörner and Jassem Hindi, said roast beef may at first appear so transparent and wispy such that you wonder how the chef ever managed to carve the meat so thinly, but just the same it’s packed with solid nutriments. Yes, it’s another “quiet” record, the product of a situation where one of the performers Axel Dörner has spent many years refining and reducing his trumpet playing method in pursuit of an ever-more minimalist goal. It seems to me like only yesterday I was being floored by the audacity of Durch Und Durch, a single 40-minute improvisation of breathy and abstracted trumpet tones he recorded with Tony Buck – but that was ten years ago. On this record, which was recorded half at EMS at Stockholm and half in an art gallery in Berlin, we see Axel Dörner V2.0 at work – he’s now equipped his instrument with small microphones, a mixing desk, and a special interface designed according to his wishes and desires. With this very electro-acoustic mode of setup, he’s able to bring in feedback and live sampling of his own trumpet playing – which is to say nothing of his ultra-refined playing technique, which allows him to wring uncanny snake-like tones and hisses from the bell of his trumpet. With the exception of some recognisably trumpet-like parps I can remember hearing, his playing on waterkil is mostly about extremely abstracted and minimalist sound art; I can tell you’re already shocked by the rigour of his stern, unforgiving approach.

However Jassem Hindi leavens the equation somewhat, adding a requisite dose of who-knows-what to these recordings…I don’t say this lightly folks, as this Saudi-born fellow who studied at the Sorbonne has made a studied attempt on his own behalf to make sure he falls between the cracks of the pigeon-holes. He may have worked with samples of other music, he may have created installations in art galleries, and he may have worked with experimental dance troupes…all this is admitted…but he states, quite insistently, that he is not a musician, visual artist, or a dancer. On his performing table we may see contact mics, tapes, assorted broken objects, and machines that are being diverted for the purposes of sound art. He also carries non-artistic field recordings around in his pockets, by which we understand that they are not “aesthetic” field recordings inviting us to savour the joys of a waterfall or a night-scene in Africa, but are instead badly recorded and distorted views of incredibly banal domestic scenes, like families closing the kitchen door, or something. This approach I like; it’s already starting to make Chris Watson and his imitators look like old-fashioned landscape painters. Hindi steers all of these diverse sound sources through the ever-present mixing desk, and when these gobbly nubbets of his are performed together with whatever Axel Dörner is doing, the results have made it onto these two sides of clear-pressed vinyl in an unedited suite of perplexing art music. They’ve been working as a duo since 2008, even if they don’t have many published recordings to show for it. This may even end up as their definitive statement.

It’s suggested that we listen to waterkil as a series of “audible snapshots of a river course”; even a particular river, the Moldau, is proposed for such an exercise. We’re aided in this idea by the superb cover artworks, heavy pencil drawings by the artist Matthias Reinhold. The sleeve itself is triple-gatefold, beautifully printed on both sides of white card, has a die-cut hole in one panel, and given the size of the LP edition the sleeve has every right to be regarded as an art print. I like the interior side with its idiosyncratic little shapes placed judiciously on a white field (it comes close to illustrating the music we hear). But note how the front cover represents a river, possibly, lurking behind a thick growth of brambles and reeds. I like this river-course notion, but waterkil is a largely static piece of music; or to put it another way, its forward movement is very halting and constantly interrupted. No sooner has the river voyage started than Dörner and Hindi decide they’ve found a leak in the canoe, and we have to pause for ten minutes while they think what to do about it. Or they simply pause with no explanation given, and go and stand on the riverbank looking profound and lost. There are a few aural moments of real drama on the record, where the combination of sounds makes for highly effective listening, but for some reason the duo don’t care to sustain that mood, and abruptly break off into mysterious silence (a silence punctuated by odd hisses and creaks). However, we’ve got to admire the boldness of this statement, one which shows how Dörner is pushing his work away from the confines of the “improvised” and into a more thrilling zone of collaborative, electro-acoustic / experimental sound art. Hindi, meanwhile, continues to fall through the cracks. Received in 2012.