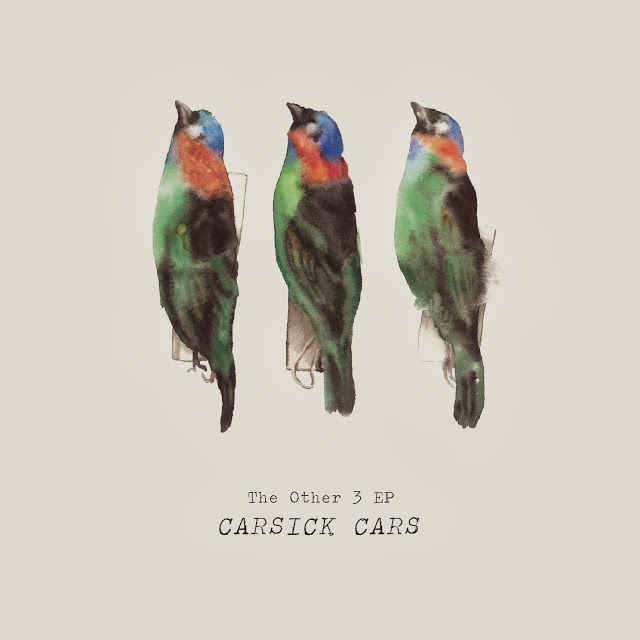 “Carsick Cars” is one of those band names that just seem so obvious and cute that you wonder why no-one ever claimed usage of it over the past 50 or so years of rock and pop before a Chinese indie-pop / noise group came along and made the name its own in 2007. This bright-eyed and bushy-tailed little EP was released (I think) to coincide with CSC’s recent tour of the United States and to accompany a full-length album called “3”, which explains the EP’s title. The EP features five short tracks that may have been singles in the past or are alternate rejigs of songs from previous releases: the first song is performed in Mandarin Chinese but the rest are sung in precisely intoned English.

The band have a very poppy sound which is jangly and which sometimes incorporates a darker, more contemplative mood along with the bounciness. Listening to the EP right through, I’m sometimes reminded of the legendary American new wave act Devo who could be very serious and witty as well as eccentric and fun. While the opening track is definitely sugar and spice and all things nice, subsequent songs showcase what CSC are really capable of: catchy melodic pieces that combine melancholy brooding with an almost defiantly optimistic attitude that no matter how down in the dumps you fall, you’ll eventually get back into the light. “Shelter” is a thoughtful and lengthy song while “15 Minutes Older” is a rough-edged rocking little galloper with buzzy guitars, woozy drone and a dreamy jewel-like jangle ambience. “She Will Wait” tends to be more low-key and gentle than the preceding, and the mood is even more wistful and mesmerising. A psychedelic touch comes with the bewitching lead guitar soloing.

While the music is very good and there is plenty of energy and zest throughout, there is a certain flat quality in the singing and it may be that CSC are still finding their way in singing in English and conveying emotion at the same time. The lyrics seem to be rushed and have a bit of a robotic quality. Apart from this detail, CSC have found a niche in dark jangle noise pop that could take them further into shoegazer and depressive rock pop territory if they’re prepared to take risks with their music.