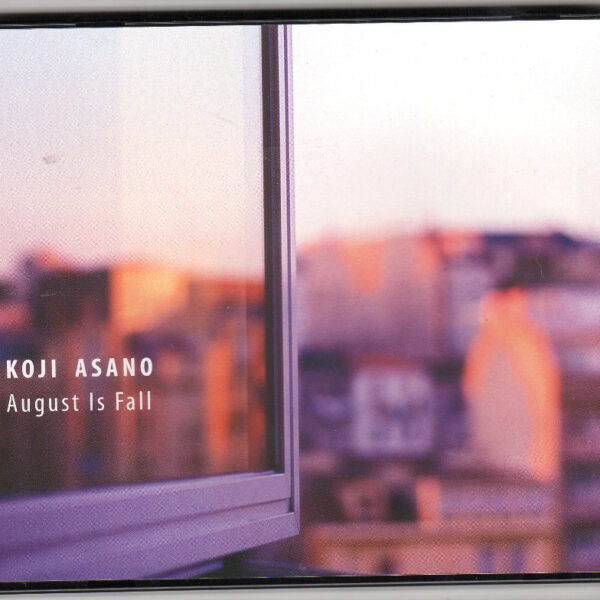 I. Koji Asano presents us with a Neapolitan ice-cream of digital concretions, each part of his tricolore an insistent and near-literal manifestation of that vivid phrase ‘An Earworm’ – or, in the original German – Ein Earworm. A delightful image for all to consider and an apt analogy for the hour-long tripartite aural noogie presented here, a symphony in mildly irritating looped mini-noises.

Original sound sources are masked by process and near-focus, but could be in part derived from acoustic phenomena, perhaps breath in the tubes and on the mouthpiece of a brass instrument, traces of room sound or sounds whose scale and intimacy implies a human-scale and intimate architectural setting also remain. (Chamber? Asano’s anonymous cityscapes on the cover, glimpses through windows to rooftops and service staircases, imply empty hotel rooms or flats.) Tiny clicks and the low-key buzzing of a malevolent air-conditioning and giant energy-saving light-bulb. Pause for breath and look out of the window. Manipulate object with hands. Click. Continue buzzing.

Sustained midrange activity over the three tracks or movements utilises distortion but is never harsh, focus is intense but restrained, and Asano is the master of his material, never yielding to the inexorable and anxious logic that demands productivity and regularity of noise; buzzing ceases arbitrarily and momentarily as if half-distracted by a pigeon and an ensuing reverie involving a discarded piece of paper lying just there on the floor. Click. Continue buzzing. The organic logic of breath and the non-linearity of association intercede in the mechanical tendencies of continuous electronic sound that would otherwise threaten inevitability and happily exclude other vectors. Throwing a spanner in the works. Although I get the impression that a spanner is not an ‘Asano’ object, cast your eyes through the back issues of this publication and you may be able to corroborate, however, that Ed once received a Koji Asano-branded ballpoint pen.

II. Asano, entranced, prods and buffs up his 1:72 scale grindings into creamy Milliput sausages, extruding them as rigorously as a tantric douanier towards the pulsating beige centre of his incremental porous topography. Straining ever onwards, but naturally managing to make time to pause for a click or some rustling. I would suggest that next time you wish to imagine that you are a sheet of sandpaper the physicality of these works would be a useful aid in visualisation.

In its seeming arbitrary internal rules Asano positions this sound beyond good and irritating and stakes out a small, honey-combed territory of micro-noise. Merzbow as conceived of by a bluebottle and a pane of glass; a remarkable and oblique dedication to a reduced palette and the economic use of small variations and contrasts within an extended time-canvas of sustained sonic character ekes drama from what may have seemed unlikely sources. Within the severe limits set it utilises effective counterpoints and manages to draw the listener in to its initially unprepossessing or baffling world on its own terms.

III. Some of this review may have appeared wearing, or tortuous; you may have felt you discerned a slow and counter-intuitive progress, a narrow focus, playing haphazardly over minutiae, may also have become aware of repetitions and redundancies – however you may have enjoyed details, or words, become intrigued despite any demands on your patience. In this way I have fiendishly sought to emulate the very character of August is Fall, to further give a rounded impression of that flat and strange music. So, it’s not just an interminable review, honestly.

Also honestly, August is Fall has plenty to offer the curious listener – from deft juxtaposition of a minimal array of quirky sounds and effective counterpoints of those sounds to non-standard arrangements or arrangements that subvert more dominant and readily-disengag-eable 1 forms. Confrontational through use of duration, insistence and palette, though through the use of ‘weak’ or small sounds and clever use of pauses and silence pleasingly spry and canny about it. Also sporting an underlying and fundamental sense of human scale that insists on the concrete and present, what I would term a documentary approach to choice of sounds that I would characterise as one stimulating 21st century extrapolation of music concrète (we will investigate two other albums in a similar light in future reviews) – which in this case is also applied to the digital noise techniques used. An interesting synthesis of elements successfully crafted into an unusual, tedium-flirting, object-manipulating, bit-crushing, forehead-boring, idiosyncratically stimulating whole. Speaking of tedium, I’m finished again. (For now).