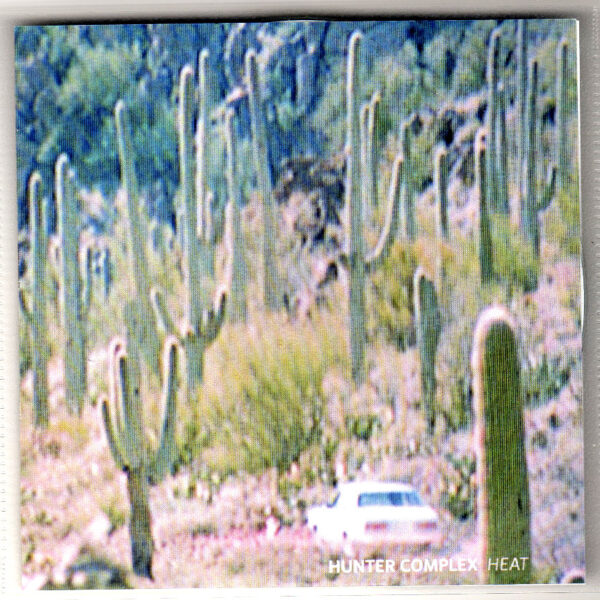 Could anything possibly sound less Dutch than this effervescent synth rumination? Granted, my immediate, top-of-the-head reference points are DJ Tiesto and Dick Raaijmakers, but this is something/where else. The preceding, self-titled debut from Hunter Complex (aka Narrowminded label founder Lars Meijer) was an altogether more obvious exercise in multifarious 80s synthphonics than this hazy, delay-drenched road trip to nowhere, for which Hunter has packed into trunk a sparse synth and drum machine set up and phased us into a Californian dreamtime, where we experience every arpeggio as a shimmering mirage: detached and tentative and hovering indifferently over merciless plains, though not without a distant whiff of romance. Corresponding to this imagining of a muzzy limbo, speed seldom exceeds third gear, while the mysterious navigator’s delivery exhales emotional ambiguity in low mumbles that suggest a thinking out loud; his final exhortation to ‘Let Go’ could as easily imply ill or amorous intentions for whomever accompanies him through those heat-struck, death valleys. The prolific producer Steve Moore – recently seen keyboarding for Italian prog legends Goblin – here alights in the synth-usiastic Spectrum Spools fold for a minimal, matter-of-fact and at times reminiscent effort to Hunter Complex’s heat wave pop. It’s colder though, and even more pared-down, as the deconstructed rave arpeggios of ‘Planetwalk’ bear adequate testament, and when it does resemble Moore’s sci-fi saga work in Zombi, it does so skeletally, as on ‘Deep Time’. Moore’s understated manner – which verges on the baffling in the meandering pulses of ‘Logotone’ 1 – adds genuine credibility to a ‘less is more’ credo, which to my mind has hitherto resulted in many uniform and unexciting pieces of work. I personally couldn’t count myself among the many admirers of Surface to Air or Spirit Animal, as it all seemed – like Prince’s much-loved 1999 – to go on for double a reasonable duration. Nor can I say that this properly takes its place amidst the recent surfeit of 80s-venerating soundtrack simulations, being in truth a properly individualised effort. Still, had we one Pangaea for every reissue and also-ran then we’d still have ourselves a handsome hit-count.