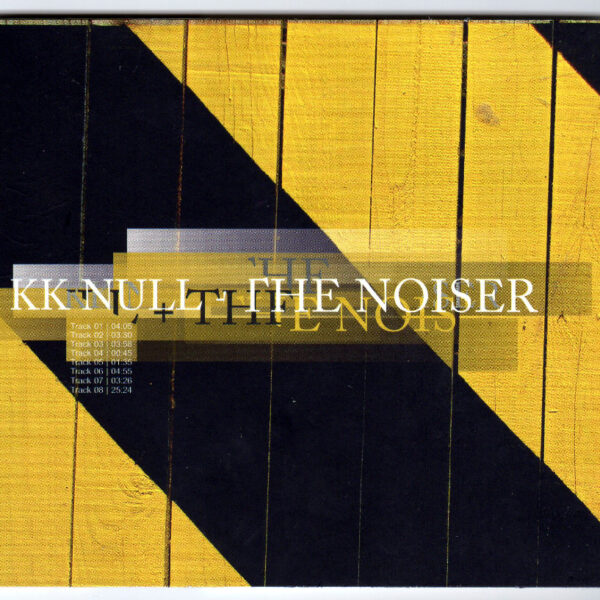 KK Null + The Noiser (MONOTYPE RECORDS MONO054) is a meeting between one of Japanese noise-rock’s heavyweights and the French electro-acoustic anarcho-poet loon Julien Ottavi, with results every bit as fractured and unpredictable as poisoned sushi wrapped in a crepe suzette. The album’s first half is seven short-ish experiments in grotesque electronic rhythms and crazy samples intercut with each other in ways that make no sense; after you’re reeling from that onslaught, they finish you off with a 25-minute monster that’s just chock full of playful edits so as to resemble an episodic, cartoon-like composition in the form of an acid trip. Free jazz piano, birdsong, unhinged electric noise and odd percussive gamelan doodling are just some of the elements you can expect from this garbled spew. While it includes some live recordings made in Vienna, this is mostly a fun-filled and semi-dangerous studio concoction – which is evident from all the half-mad control-freakery that’s going on here. From October 2013.

On the face of it, CMKK’s Gau (MONO065) is a pretty sickening proposition – four artists producing a single 47-minute meander through some surreal sludgy ambient drones while one of them recites their strange poetry using plenty of pastoral images like black water, swans, fields, and mist. There’s Celer with laptop and samples, Machinefabriek with laptop and tapes, the guitars of Romke Kleefstra and the poetry of Jan Kleefstra. However, listen to the end of this slow dampened odyssey across joyless and sunless flatlands and you’ll feel the rewards as your brain is softened into malleable mush, fit to be sold as Sten Hanson’s Canned Porridge. Not unlike hearing Polwechsel after they’ve swallowed a dose of Mogadon, with added zombified electronics and a stoic TV announcer trying to remain calm while he watches the whole world being flooded. From October 2013.

Here’s some French heroes of indefinable music and sound art: Eric Cordier and Jean Luc Guionnet, discreetly rubbing their organs together in a deserted temple in Metz. By “organs” I mean the hurdy-gurdy of Eric, which has been amplified and processed while he squeezes it, and the amplified organ of Jean-Luc – an instrument which he’s previously played to great effect in various church and cathedral settings. De Proche En Proche (MONO061) comprises live recordings from 2004, mostly rather uneventful and slow droning. Things liven up from the third piece onwards as vaguely menacing machine-like qualities are exhibited – it sounds like a milking machine going wrong and the cows are moaning in complaint. Or perhaps reaching a cow-like orgasm of some sort as they feel the errant mechanical clamps around their udders. From October 2013.

Unearthly slab of live electro-acoustic music here from Charles-Eric Charrier, who is manipulating two musicians – their instruments, at any rate – on C6 GIG (february 2012) (MONO059). Martin Bauer is playing the viole de gambe and Nicolas Richard plays percussion and accordion. From this we derive 45 minutes of continual, mysterious sounds, at times approaching the shape of a nightmarish cloud of purple filth descending on the belly of the fitful listener. I’d have liked a tad more commitment to sustaining this crapulous mood, but I can understand why Charrier feels the need to layer this inexplicable composition with long silences, pauses, and other existential longeurs. Still, when the strings pluck bass throbs from the lower registers and the percussion rattles its cage like a snoring gorilla, you’ll find me there with my concrete pillow. From October 2013.

Bartek Kalinka concocts some fairly bonkers music on Champion of the World Has No Monopoly on the Legions (BOLT RECORDS BRK003), through overdubbing meandering acoustic guitar strums, wonky synth tones, and arbitrary percussuon bashes. These ten tracks feel all of a piece and sonically they occupy the same zone of solitary, intimate conversations – except I feel like the conversation is taking place with a balmy loon who doesn’t even speak my language. By time of eighth track, called ‘King Is Approaching’, my mind is reduced to small lumps of gravel and any sense of proportion has been sapped by the tropical, heat-cooking weirdness that boils the brain slowly. By the end, I give in and am prepared to admit that the King is indeed approaching, and that creator Bartek Kalinka is in fact Napoleon.