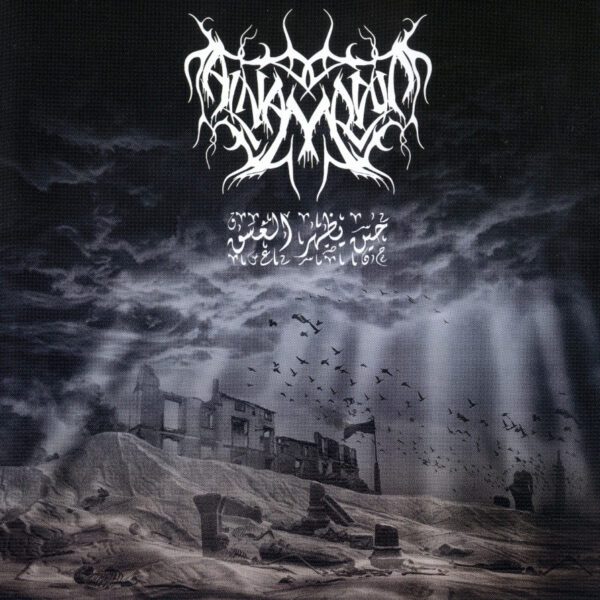 You’d think living in the heartland of fundamentalist Wahhabi Islam would deter most people from forming anything other than short-lived solo online bedroom black metal projects. Yet here’s a Saudi band that has already released several recordings including four albums. Al Namrood is the band’s name and the album under review, the trio’s fourth, came out early in 2014, demonstrating that this project is alive and certainly kicking!. And kicking – the percussion, that is – is what they do best!

The band’s style is a mix of crunchy melodic black metal, maybe some death metal / thrash influences and native Arab / Oriental musical styles and instrumentation. Generally the beats and rhythms are provided by Western instruments including a drum machine and those instruments that take the place of lead guitar tend to be native Arabian ones. Even the main melodies are of native Arab derivation and the band also employs chords and melodic or riff motifs with quarter-tones that lend a demented air to the general proceedings. Opening track “Estalahat al Harb” is a fine instrumental demonstration of this East-West fusion and its air of surreal, slightly chaotic confusion prepares listeners for what’s to come.

The sound isn’t as crisp as it could be to show off the richness of the sonic layers inherent in the music – I’d love to hear some of the jewelled tones of the oud and more of that resonant hand-drumming – but given the difficult conditions Al Namrood is performing under, the fact that this music even exists is a wonder so some technical imperfections in the recording are to be expected. What the musicians might lack in technical finesse, they more than compensate with energy, enthusiasm (maybe a little too much so: in some songs, the percussion is in danger of being punched right through), the most deliriously demented cartoon melodies and a choir of bloodcurdling guttural voices fighting for space in front of the mikes. The sense of humour these guys have is infectious and boisterous.

Some of the more memorable tracks include the brain-destroying, mind-melting “Youm Yakram al Jaban” and the flowing if more chaotic “Bat Al Thaar Nar Muheja”. “Um Al Qashaam” features the most thunderous beats and blast-beats along with almost laughably cartoony deranged quarter-tone melodies. Each succeeding song is crazier than the one before and I just wonder where and how the guys find the inspiration to think up the most bat-shit insane tunes and rhythms as each song wipes my brain clean of everything it thought it knew. I’m sure the musicians themselves can see the humour present in mashing together the most brutal metal rhythms and beats and Oriental tunes. For their part, Western listeners can experience something of the surrealism that folks in the Middle East have to live with, in societies at once ultra-modern and wealthy, yet still wrestling with an oppressive medieval political culture and the instability in nearby countries like Iraq and Syria.

As it progresses, the madness and the histrionics escalate further and the music threatens to drown under the sheer thunder and the almost-buffoonish melodies, rhythms and beats. Perhaps that chaos is part of what Al Namrood guys intend to say: that they live in an absurd world of unlikely pairings and polarities, and the only way to make sense of it all is to reflect some of that madness back at it.

The journey through the album is very exhausting and I’m not sure that I’d want to repeat it over and over. Maybe I’ll visit once or twice a year. I’d certainly recommend though that everyone who thinks they’re broad-minded about music, and music from the Middle East in particular, should listen to this album at least once.