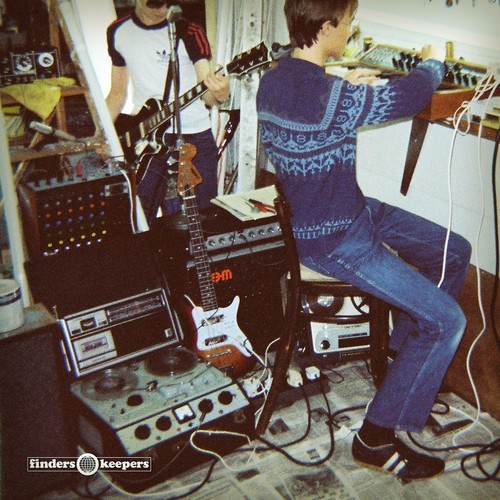 Here’s a recording where the history of the artist and the equipment used is so unusual and engrossing that it threatens to overshadow the music itself. The group’s name might seem twee and antiquated to us jaded sophisticates today but in 1981 the concept behind the name and project was just slightly ahead of the trends prevailing in the commercial pop music industry in Britain. The astonishing aspect of T.R.A.S.E. is that it was actually the music project of a 16-year-old boy who started it as an extension of both the work he was doing at school, in class and in extra-curricular activities, and his own interests in pop and rock music. Even more amazing is that the youngster, Andy Popplewell, built his own synthesiser (the Elektor Chorosynth), a 6-channel audio mixer, a phaser and a fuzz box using instructions from electronics magazines and the school woodwork and electronics skills he gained. With money earned from delivering newspapers, Popplewell built all these himself (his father having died years earlier), acquired and assembled a drum machine kit, and off he went, experimenting with composing and playing his own music, some of the results of which have now been released on vinyl and CD.

Admittedly if you were to hear the music and you didn’t know that this was all the work of a young teenage boy with some help from his guitar-playing kid brother, you’d swear that the artist behind the various rhythm texture pieces making up the bulk of the recording was a bit conservative in the way he coaxes sounds and melodies out of his machines, with very few sounds hitting the extremes of the instruments’ capabilities and burning up the wires. The drum machine beats anchor the music rigidly and apart from a couple of instrumental tracks near the beginning and the end, there’s hardly any experimentation with basic elements like sound; the music is driven by repetitive melody loops held in place by fixed beats. Sometimes the music is so slow or monotonous that you almost fall off your seat in slumber. On the other hand, there are some good tracks that show music composition potential (“Electronic Rock”, “War Machine”, “Unrequited Love”) even if very little is done with them. There are some beautiful ambient mood pieces like “Harmonium”, a radiantly sunny instrumental that includes a trilling melody and plucked warm-summer guitar tones. That a school-kid was able to progress as far as he could building his own equipment and writing and playing his own music within fairly commonplace artistic and musical conventions of the time might say something about his middle class upbringing in early 1980s Britain and how much (or how little) exposure children had to music, art and other avenues of creative intellectual enrichment.

In the booklet that accompanies the CD, Popplewell lists among his musical influences acts like Kraftwerk, Giorgio Moroder, Jean Michel Jarre, Joy Division, Ultravox, the Human League, Gary Numan and John Foxx and his own music certainly reflects those inspirations. (The booklet also mentions his interest in Cheap Trick, Led Zeppelin and Motorhead but their influence, if any, can’t be discerned, perhaps for obvious reasons: their music was dominated by guitar and was not minimalist in structure.) Some tracks have a melancholy air as well as a definite pop orientation and the deadpan singing style Popplewell employs might owe as much to his heroes as to his own inexperience as a singer. Although in the booklet he states his suspicion of being close to having Asperger’s syndrome, I detect in the music he may have had something of a talent for picking sounds and tunes that conjure up particular moods.

I don’t have many favourite tracks on this CD but the one I like best is one I might treasure for the rest of my life and that’s “War Machine” for its delirious slightly off-key and dazed synth tones and the clicky mechanical rhythms. Probably by the time Popplewell composed this song, he’d already had considerable experience writing, playing and polishing his music. The singing is frail and boyish and the whole track sounds a bit like a cross between early Depeche Mode and The Cure. A solo lead guitar turn by little brother Phil Popplewell adds a soulful blues mood. The song is crowned by the sort of abstract early-Kraftwerkian experimentation, here simulating machine-gun fire and falling bombs, I’ve been dying (err …) to hear all through the album.

The value of this recording lies mainly in the circumstances in which it was conceived, the DIY culture that existed in the UK in the late 1970s / early 1980s and the fact that it was made by an artist still at high school and what this suggests about how much Western society still underestimates the creative potential of adolescents. Some of the songs may well grow on listeners over repeated hearings.

Alas, Popplewell did not follow up his early precocious start as an experimental electronic pop musician; he became a BBC radio broadcast engineer (though he curiously manage to miss falling into the BBC Radiophonic Workshop) in the 1980s and has held other technical and engineering positions since. It may not be too late for Popplewell to resurrect his music career if he so wishes, though I doubt that the novelty value of his having been a child musical prodigy would last long; advances in music technology and electronics have been so great over the last 30 years that audiences born after 1980 might well be mystified by the music and instruments used, and several tracks really are just not much more than rhythm texture studies.