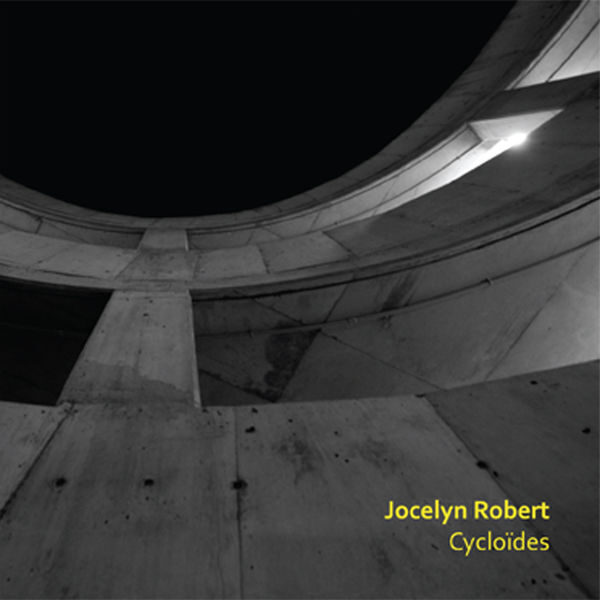 Many aspects of great interest to Cycloïdes (GD STEREO GD023), a recording made by Jocelyn Robert for Geoff Dugan’s GD Stereo label. Me, I’ve had a soft spot for Dugan’s releases ever since Psychogeographical Dip and The Architecture of the Incidental were released in the late 1990s. That’s right, he’s very concerned with sound art as it obtains in the urban environment, and he’s continuing those preoccupations with psychogeography, situationism and the dérive with this new release, and it so happens Mr Robert shares a lot of common ground with him. This record of piano improvisations is supposed to be asking pointed questions about architecture and music; Dugan declares outright he wants to release “artists whose work challenges the boundaries, rules and definitions of architecture and music”, and Robert fits the profile – he trained as an architect but turned his back on the drawing board in 1989 and has since been pursuing opportunities to position his music in a very specific contemporary urban context. He sees music as a nexus of “physical, political and geographical forces”, rather than inhabiting a stand-alone niche which we might call “fine art” or “culture”. To be honest, I’m not entirely clear how these strategies are enacted by Robert, but he does come close to creating a very interesting contemplative and personal “space” for the listener with this record, much as if he were building a personal dome or canopy for us to wander around in solitude.

This he does by exploiting a particular facet of the Disklavier, a computer-based piano keyboard. When he would play a “wrong” note or make a mistake, it would remain in the Disklavier’s memory; so for Cycloïdes, he kept the mistakes in, and used them as a set of rules to guide his next move in the improvisation. Get the idea? It’s music that’s building on itself, “reaffirming its instant past in an almost cyclic manner”. It’s also interesting, although not remarked on by Jocelyn Robert in his notes, to suppose that there is a constant tension between human (performance) and machine (memory) taking place, a situation where the blind perfection of the computer is almost working in opposition to the intuitive and errant movements of the pianist. I further suppose that this is a situation that might escalate into an absurd cloning process not unlike the scene in Fantasia, where Mickey Mouse’s broomstick slaves get out of control. Anyway, I should have said this at the start, but this is also beautiful music to listen to, and fans of Morton Feldman’s piano compositions should check this out instantly. Brittle, precise, clean, yet very emotional somehow. We last heard this Canadian composer / musician on Monsonic, his 2010 LP of elaborate electo-acoustic layerings. From 11 November 2013.