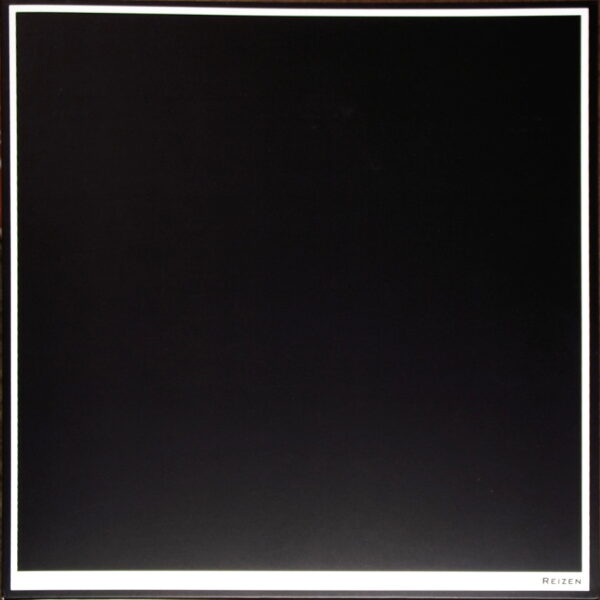 Reizen (FYLKINGEN RECORDS FYLP1034) is the solo venture of Atsushi Reizen, the Japanese guitarist who quit his band Nerae to pursue the development of his solo technique. The album is cut at 45 RPM, a move which may lend extra clarity to his rather solemn and portentous ultra-minimal guitar drone. The first side features two studio recordings, apparently themed on his ideas about “differing speeds”, but I can’t discern what this means; if he’s using studio varispeed on his tapes here, it’s certainly too subtle for my ears. Maybe it just refers to the speed of his strumming hand. There is a vaguely gloomy undercurrent to this work which I do like, and it’s hard to fathom where this emotion is coming from, but there’s something stern and unblinking about these purring, vibrational tones he sets up, much like a large black panther materialising right there in the room. It’s hard to know for sure, but I’d imagine there’s a deathly precision about the way Atsushi Reizen slowly executes his guitar tasks, moving with all the seriousness of a nuclear scientist handling fissionable materials. However, if you think the A side is slow, flip over to the live recording on the B side. Talk about your glacial events…it’s just a big black pool of cold, cold nothingness, rippling under the breeze of an ancient icy wind. The solid minimalism of the printed cover – none, none more black – confirms the chilling worldview of this solitary fellow.

Looper are the trio of three European improvisers – Ingar Zach the Norwegian percussionist, Martin Küchen the Swedish saxophonist, and Nikos Veliotis the Greek cellist. They’re not just an ad-hoc formation and, though their recorded catalogue is scant, they’ve been doing this since 2003. When playing live, they aim for a multi-media experience, with Veliotis providing the video elements in support of an environment that is intended to have a profound effect on the audience and disrupt our normal perceptions of time and space. Nothing too ambitious, then. For their matter (MONOTYPE RECORDS MONOLP015) record, recorded in a studio in France in 2010, it’s impressive how much of a light touch and imperceptible presence they are able to maintain between the three of them. Very constrained. Are they even playing anything? The A side in particular is extremely hard to hear, yet somehow provides a rippling murmur of low bass tones that almost has a pattern to it. When I first spun it, it seemed so inhuman, clinical and perfect that I thought it was electronic music! The B side has less of that continual tone effect, and is a bit more sketchy and broken – but still very hard to hear. Low volume reaches new depths. If you like the idea of “reduced improv” but find most available recordings in the genre are too busy and noisy for your tastes, then step right in – Looper have just what you need. Arrived here 9th October 2013.