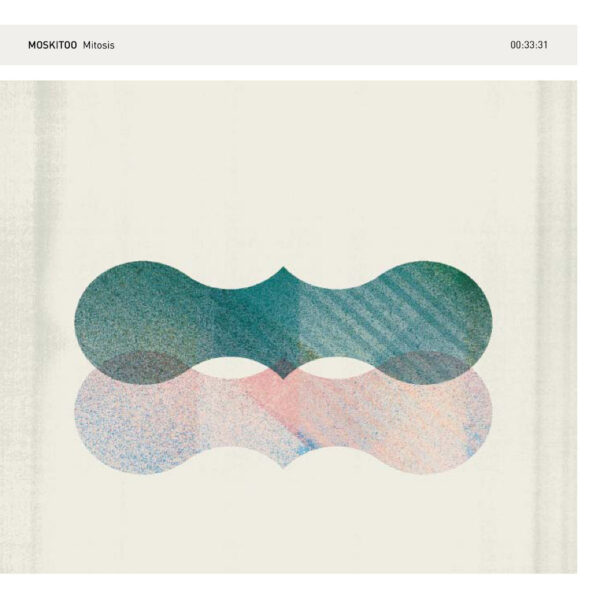 The world that Moskitoo inhabits – she grew up in Sapporo, Japan – is one that followers of certain Japanese genres would recognise. The inspiration for the album, she says, “came from cells, molecules, atoms and particles that are the smallest part of animals; tiny dots that turn into something visible.” But ‘Mitosis’ also means the process of cell division, one cell becoming two separate ones. Through this division the entity grows. Using the aesthetics of glitch to supply the molecules, the sound multiplies and changes slowly over time. This evolution reflects, she says, the subtle changes that occur around us all of the time, but remain unnoticed.

The guitars and Casio keyboards that she started her career with are now joined by metallophones and organ, toys, the tools of electronica and her vocals, all of which provide the rhythmic fragments that underpin this work. She explores and investigates the understated, finely detailed, sounds. There is a beauty about her work. One that provides a human face to the digital world.

The first track, ‘Wonder Particle’, starts with an electronic heartbeat, as if to say that even within the smallest fragments there is still life. The ephemera of glitch and ambient piano soon augment the pulse. The vocals are fully formed but as the song progresses they start to fragment, supplying texture and rhythm, a hallmark of the work under review. The view of a soul, a humanity within the machine coalesces as the pulse carries on, but now in the form of treated breathing.

‘Trajectory’ starts with interference; vocals, music and disparate sounds continually battle in order to be heard. The vocals flip from one sonic treatment to another, aiding the fragmentary nature upon which the album is built, providing a ghostlike, dreamy ambience. This is held together by a repeating motif, changing, coming back, changing again, reminding us of Moskitoo’s regard for subtle alterations that can go by without us registering them.

The further we stray from the start of the album we can sense a move away from what we might call ‘songs’. Moskitoo introduces oriental tunings, dissonances, and events travel at differing speeds causing friction and interest. She views her vocals as just one instrument among many; on ‘Mint Mitosis’, they are balanced equally within the mix. The conventions of song are probably not top of the agenda for Moskitoo, but rather the sonic experience as the tune disintegrates.

‘Fungi’ starts off with a series of backward sounds that pass-by; to say “glide” would give them a movement that they do not possess. Recorded on one of Tom Waits’ trips to the junkyard, with the juxtapositions that Franco Battiato used to throw in during his more experimental moments, there is a beauty, a calmness, and when a Satiesque-type piano motif (albeit with a touch of venom) enters, it does not surprise.

The final track ‘Astra’ once more explores this idea of not changing but changing. It asks us to contemplate something we might not otherwise reflect upon, something that ordinarily would not register with us. By setting it in front of us, Moskitoo makes us ponder the everyday relationship that we have with the world around us. Starting with restrained electric guitar, producing sounds more through investigations of the sounding board than by strumming or plucking, the basis of the piece evolves. Other instrumentation joins, itself circulating, each element oblivious to the events surrounding it.

This, Moskitoo’s first release since 2007’s Drape, might act as a gentle entree into glitch/electronica, or furnish a perspective of how crafted pop can still have a place in the world. We adjust our view of the pop of the past by gazing at it through the glasses of today. There is a mutuality between the concept of the work and the process of the title. Glitch is the ideal abstraction to convey the notion in audio form, allowing for the smallest units in any deconstruction of music. It supplies the method to break down sound, which can then be renewed through the work of the artist. Finely crafted, hinting at experimental, this music has been manicured and slaved over. There is a warmth, an affection in this world, where the crackles, stutters and pops that come with electronica are as natural as any sounds produced by guitars and pianos. Moskitoo avails herself of both as equally valid tools to form her music, filling the space with fragments and melodic textures.

The pop ethos that initially drew us in is sacrificed to the constructs of sound as the album progresses. Some, like Joanna Demers, subscribe to the view that sound as an object cannot possess any aesthetic value of its own; it lacks meaning. In the case of Moskitoo, I do not think this argument holds water. Every nuance is there for a purpose, every sound builds a sonic picture. Time and space are dilated, pulled and tugged at as much as the various elements within, allowing for something more than an aesthetic to develop. It is strange that even though electronic music is now commonplace, it is still regarded as a second-class citizen in some quarters. Maybe albums like Moskitoo’s will allow it all to be accepted just as music.