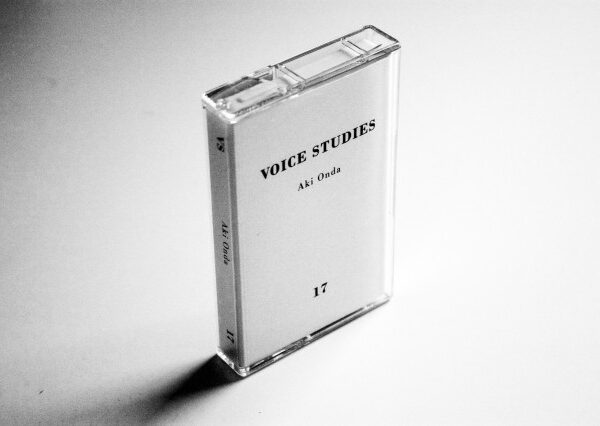 Three cassettes we received in January 2014 from the Voice Studies label which, along with its parent venture My Dance The Skull, is run by the London artists Marco Cazzella and Bethania Dick, whom I encountered recently at a performance event called Spoken Weird at the Whitechapel Gallery. We’ve noted previous releases in this series from Mag Resistance and Jaap Blonk.

Aki Onda is well known to readers as the Japanese-American artist who records large parts of his daily life on his handheld cassette Walkman devices, and has over time become the reigning emperor of the sonic diary form. One aspect of this activity involves listening to the radio in foreign hotels on his travels. It helps him get to sleep to hear foreign voices talking. He’s got a special radio-cassette Walkman which enables him to tape these programmes, and it’s selected portions of these recordings that we hear on Midnight Radio 1 or Part A (VS17). The crux of the matter is that he himself can’t understand these foreign languages, and he appreciates these spoken-word broadcasts purely as sound. “There is no bigger joy than the moment when I begin to hear these languages that are foreign to me not as words but as sound”, he reports. “In these moments, I am wading in voices.” On the face of it this may not seem especially remarkable, but the published result is a delight, and rich with the sumptuous detail which Aki Onda seems to bring to much of his work. Even if you just enjoy the sound of radio static and mild distortion you will find much to investigate here. It’s a strong blend of radiophonic and tape sound art.

Maurizio Bianchi recorded his Phonemissions (VS15) using his “phonetic voice”. Extensive research has failed to uncover what “phonetic” means in this context, but it may simply refer to the phoneme, the basic building block of the spoken word. As is well known, The Residents used the term “phonetic organisation” as a little in-joke during the early phase of their career – it was more likely to have been a euphemism for “we can’t play a musical instrument properly”. On the two pieces ‘Precursor Molecules Metastatic Phonation’ and ‘Linear Receptors Terminal Cell-Matrix’ we hear Bianchi intoning and humming fractured syllables using his throat and nose, in extended phrases of dronus-interruptus…he does appear at times slightly distracted, like a fellow singing in the shower, while at other times he comes across as serious and devoted as a lonely monk chanting prayers out loud in his cell. The ceremonial aspect is suggested by the very simple metallic percussion effect (some have characterised it as banging a stick on a metal pipe) which chimes, sizzles and rattles its way through the performance. I’ve not followed the career of this creator in detail, although I gather he used to be associated with extreme industrial noise in the 1980s.

Bryan Lewis Saunders was also present at the Whitechapel event to which I refer. It was good to see this fellow performing in person as his body movements add a considerable amount of significance and authority to his spoken-word pieces. He never shies away from “difficult” content, even at the risk of alarming the audience; he can come across as fairly extreme on vinyl or disc, and this effect is only intensified when you see him face to face. His release ‘Me and My Shadow’ (VS16) was realised with the help of Z’EV. This release could represent more content from his ongoing “dream diary” project…unlike Aki Onda above, who always seems to enjoy a good night’s sleep when listening to foreign radio transmissions, Saunders’ demeanour often suggests he hasn’t had a restful night in two or three years. He’s constantly troubled by his own dreams, the voices he hears in his head, and his own speaking voice – he’s a chronic sleep-talker, and has assembled a voluminous collection of his own sleep tapes. This might be what we’re hearing on ‘Me and My Shadow’, although it’s somewhat more coherent than we might expect, and might be extracts from an insomniac’s journal. The abiding theme is physical discomfort; bodily complaints heap up, and are described in painful detail. The voice sounds distant, washed out, and beaming at us from some nameless long night of the soul. The chilling effect is aided by ZEV’S delicate white-noise sound art in the background. Nearly two hours of this unsettling sound can be yours to enjoy upon purchase of this tape.