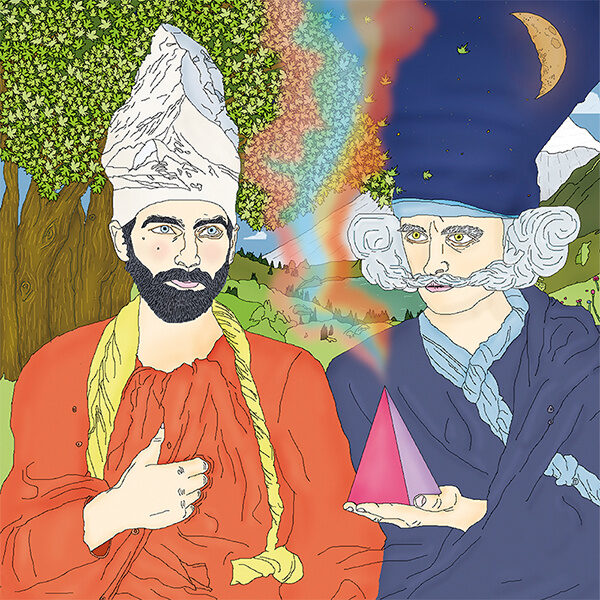 Excellent double LP of original and largely unclassifiable art-rock music is Acid Witch Mountain (ADAADAT ADA0032)…amazingly it manages to live up to that title, one that is redolent with expectations…it sounds like the missing piece in the filmographies of Jodorowsky and Fernando Arrabal…or a lost draft to the early work of Gabriel Garcia Marquez…and if we want to extend the “magic realism” metaphor, perhaps the paintings of Ivan Albright. This instrumental meisterwerk is the product of Masters, of which the key player is M. K Hauser, better known as Miklos Kemecsi, the Hungarian-Swiss musician who brought the world Agaskodo Teliverek, a band who delivered a couple of albums for this label, one with the outre title of Psycho Goulash…and Psycho Goulash is obviously a dish which, I would like think, is a stew that contains so much paprika it induces hallucinogenic visions just by sniffing it in the pot, and only a visionary such as Kemecsi would be capable of cooking and serving this bizarre delicacy from the Carpathian Basin. He’s joined by Greek player Christos Fanaras, and together the pair of them combine very spiky guitars (some of them are as prickly as eighteen cacti) to pick out intricate melodies with pinpoint accuracy, combined with eeriefied drones from the organ, and the sort of steady, martial drumming attack which music journalists are fond of describing as “ceremonial”. The final touch is added by the brass effects (maybe created by keyboard) that summon up visions of hooded horsemen riding boldly over the Great Hungarian Plain. Masters don’t deal in pomp, prog, or any form of 1970s derivative, and their lean, no-nonsense approach to studio overdubbing is light on effects (such as phase or reverb), strong on craft and skill. Perhaps it’s this sense of “functionalness” to their music that has led many reviewers to describe this as akin to film score music, a line of thinking which I will allow others to follow. Suffice to say it stirs many a noble emotion in the breast of the listener. I hope you are now intrigued sufficiently to investigate this, and also the music of Agaskodo Teliverek. I know I will. Arrived 26 Feb 2014, released in April 2014.